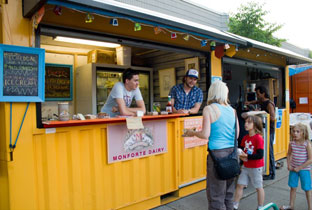 Hogtown has a less-than-progressive relationship with innovative street food, but that hasn’t stopped a band of street food entrepreneurs from attempting to transform curbside eating culture.

A year after the a la Cart fiasco of 2010, a dozen repurposed shipping containers popped up on the some-what desolate Dundas-Bathurst intersection. The project, Market 707, has a selection of global eats that spans four continents. Despite the inviting aromas that emanate from the market, the location is less than optimal due to the lack of lounging space.

Market 707 is turning to its Toronto fans in the hopes of crowd-funding a much-needed gathering space that will turn this pit stop into a destination. They hope to raise $14,500, which will be put towards building a patio for gathering and adding some new containers to the current roster of 12. Those who donate will be rewarded with swag, such as a digital cookbook with recipes from Market 707 vendors ($50 donation).

Market 707 is also holding a design competition and urges all designers, both professional and amateur, to submit their ideas for this future communal space. A vote will be held to decide which design will transform the intersection.