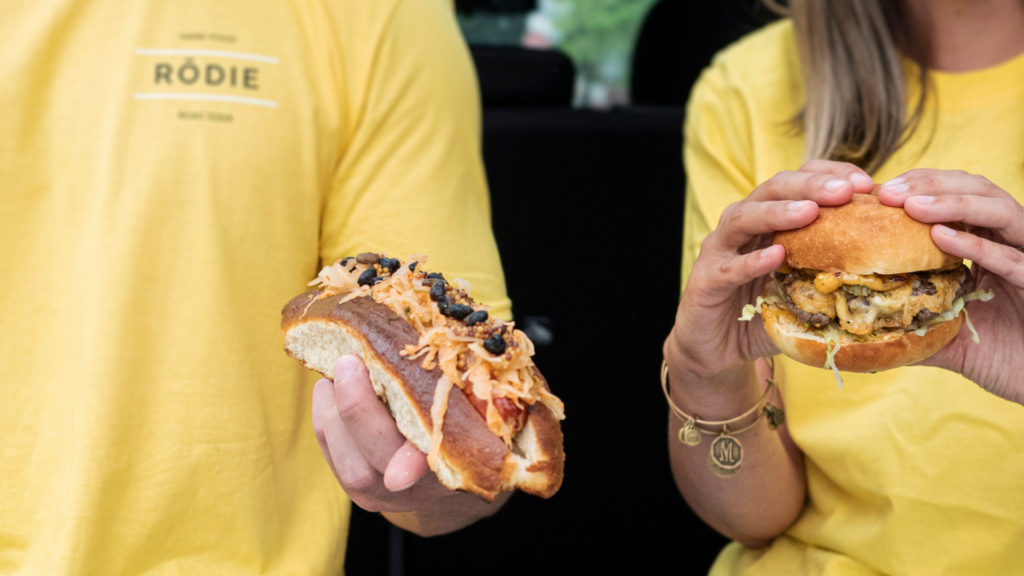 Marben is the latest Toronto restaurant to spin off into its own ghost kitchen with the launch of its new casual concept Rōdie. “The Marben brand and the food that we do is fairly high-level, so it doesn’t really translate well to takeout,” explains executive chef Chris Locke.

“What we wanted to do is to have another brand where we could have people eat all these delicious foods, but make them a little less complex and a little more accessible while not diluting what we do at Marben.”

Taking its name from a term describing “a bite or drink for the road,” Rōdie specializes in unfussy, handheld fare. Locke says that the approachable menu draws on various culinary influences. “Every culture in the world has a version of food that you hold and take on the road without having to sit down at the restaurant,” he says.

Marben bartender Farzam Fallah has developed six “road sodas” (five with alcohol and one alcohol-free), along with canned beer and wine to pair with the eats. “They’re all around 5 per cent so they’re not too strong,” says Locke of the road sodas. “They’re just really refreshing, easy to get your head around and taste delicious.”

Rōdie’s next pop-up will take place beside the Marben patio on July 10th and 11th, running from 2 p.m. until they’re sold out. Locke suggests Victoria Memorial Square, which is located less than a block away from the restaurant, could be a pleasant spot for diners to enjoy their handheld eats. The team also hopes to have Rōdie available on UberEats, Ritual and Door Dash before the end of the month.

In addition to delivery, the team’s aim is to partner with other local businesses and restaurants to host future pop-ups around the city. An expanded menu is already in the works, including a Rōdie burger topped cheese, chili crisp aioli, iceberg lettuce and pickles and served on a milk bun; as well as a French taco, which Locke describes as a cross between a burrito and a shawarma.

Keep an eye on Rōdie’s Instagram for future pop-up dates.