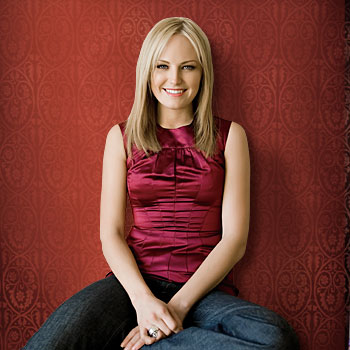 L.A.WASN’T ALL it was cracked up to be. Malin Åkerman, future A-list celebrity and star of Couples Retreat and Watchmen, was living on a couch, too broke to pay rent, too broke to buy even a cup of coffee.

The proposal had sounded fun: drop out of child psychology at York University and take off for the bright lights of L.A.

With some small-time modelling and acting under her belt, she already had a leg up on thousands of bartenders waiting for their big break.

The first year was fun. She partied, lived the L.A.lifestyle,even joined a rock band.

But after a while, countless auditions and almost as many rejections, the Stockholm-born, North Toronto–raised Åkerman realized the life she had imagined was miles from the one she was living. Broke, defeated and not exactly in a position to find the guy of her dreams, Åkerman came close to calling it quits.

“It feels sh***y to live off other people,” says Åkerman, when we catch up with her at her sunny villa in Los Feliz, California. “It’s not a nice feeling to not be able to provide for yourself. Having to ask other people for rides, I felt like a big loser.I wasn’t about to go up to some guy and say, ‘Want to come back to my friend’s couch?’”

But then, nearly overnight, Åkerman’s luck began to change. She landed a regular part on an HBO series called The Comeback,starring Lisa Kudrow (Phoebe from Friends). The show survived only 13 episodes, but Åkerman turned the right heads in the right places.

She was soon cast in The Heartbreak Kid, a comedy about Eddie (Ben Stiller) who marries the perfect woman (Åkerman) only to discover on their honeymoon that she’s a total lunatic.

The role brought out Åkerman’s knack for physical comedy (“I’m a bit of a goofball in real life,” she says), prompting the Farrelly Brothers, who directed the film, to call her the next Cameron Diaz, a nod to Diaz’s breakout role in the comedy There’s Something About Mary. Suddenly, Åkerman was accepting scripts for major roles in first-rate films.

First came the role of sister to Katherine Heigl’s character in 27 Dresses; next came the role of Silk Spectre II in the graphic novel–turned-film Watchmen; and then came a starring role in last summer’s comedy Couples Retreat.

From penniless to the penthouse in only five years — it was a dream come true for Åkerman. “I mean, I’ve had many dreams. I wanted to be an astronaut, go to the moon, be a figure skater …but in the moment,I wanted to be an actor, and when a dream comes to fruition, it’s really surreal,”she says.

In short order, Åkerman has become one of Hollywood’s busiest actors, with no fewer than four major films due for release this year.

In fact, the day we chat, she’s just about to leave for Louisiana to begin shooting another: Catch .44, a thriller starring Bruce Willis and Forest Whitaker, in which she plays the lead.

But what’s got Åkerman most excited is the upcoming indie film happythankyoumoreplease, in which she plays a woman with alopecia, a condition that results in hair loss. She didn’t shave her head — a bald cap did the trick — but she did shave her eyebrows for what is her most complex role yet.

“She is a really sunny character,but she has a darker side, and you get to see the trials and tribulations that happen to her …you see a lot of different sides to her, which I really love,”she says.

Akerman’s diverse filmography paints her as a versatile talent — someone who is comfortable doing physical comedy, romantic comedy, action and serious drama. On top of all that, she can work it for the camera, too, as steamy magazine shoots for Maxim and FHM magazines demonstrated recently.

“I think it’s so fun to be a chameleon,” Åkerman said in an recent interview with CBC. “And of course, to get dressed up and feel sexy and feel like a woman is amazing.”

Of course, modelling is where Åkerman got her start. At 17 she was picked out of the audience at a mall in St. Catharines (Niagara-on-the-Lake was home for many years) during a model search and was signed to an agency. Before long, she was cast as a Noxzema girl and landed some catalogue gigs.

Toronto, she figured, presented more opportunities than did Niagara, so she packed her bags and headed for the big city. Her parents had divorced when Åkerman was young, and Dad had moved back to Sweden.

Mom, meanwhile, had work commitments in Niagara-on-the-Lake that kept her from coming along to Toronto. So Åkerman moved into an apartment on Erskine near Yonge and Lawrence alone and enrolled at North Toronto Collegiate.

Living without her parents wasn’t easy, but she didn’t feel abandoned. In fact, she cites her parents as supportive, positive influences in her life. She and her dad talked every week, and she flew to Sweden regularly enough that she now speaks Swedish fluently.

Meanwhile, Mom, a former model, was a constant source of support and didn’t exert any pressure on her daughter to go into the business. “Even if I said I wanted to be a garbage picker, she’d say go for it,” says Åkerman.

Living alone did have its benefits, though, first among them the ability to write her own late notes. “I would show up 30 minutes late for class every morning with some crazy excuse,” she says. “I lived on the 27th floor, so the most common one was that the elevators were stuck or out of service. Sometimes I said I lost my keys or that I slept in. Meanwhile I would walk in with full makeup and fully washed hair.”

Åkerman describes her high school self as painfully introverted. “I was extremely shy. I didn’t speak. I think I had one friend at North Toronto,named Maia. The rest were guys,” she says.

But She was highly motivated when she needed to be. When her boyfriend transferred to Dante Alighieri School downtown, she took drastic measures to go with him.

“I didn’t want him around all those girls in uniform, so I lied and said I was Catholic and went with him,” says Åkerman, breaking into a fit of laughter.“Plus,I’d always wanted to have a uniform. After a while, it got pretty tiring, but it was only a year and then I was done.”

She headed to York University but decided after a year to postpone her studies and head to L.A. Today, she’s happy she made the move, but the classroom still beckons. “I’m itching to go back into psychology, to be learning again,”she says.“But with work, it takes a lot.”

School’s not the only thing she misses about home. Toronto, which she describes as a “smaller, cleaner New York City,” means dinners at Rodney’s Oyster House on King, College Street in the summertime and weekend visits to St. Lawrence Market, a place that holds a special place in her heart.

“We used to go every Sunday on a family excursion with Mom and Dad,” she says. “I remember there was a guy with a monkey that would play the mini organ and would come and get your money. I wanted a monkey so badly, but my parents wouldn’t let me. They’d just take me to St. Lawrence Market every Sunday instead.”

With four major films due out this year, Åkerman is poised for a big fall and winter, but it’s unlikely she’ll go the way of so many misguided suddenlystarlets.“

I treat things very seriously. It’s a business and there’s so much competition. I don’t take it for granted, and I totally love my job.” she says. While she has those desperate days of couch surfing to thank for keeping her grounded, she can thank Canada for helping her land her plum roles. Or at least, some of them.

“If it’s a sweet girl, the girl next door, I’ll say I’m Canadian. If it’s exotic, I play up my Swedishness. It depends what the role is,” she says, giggling. “But sometimes it’s a hindrance, when I say ‘mum’ instead of ‘mom’ or ‘aboot’ instead of ‘about.’ But I’m so glad I lived there. It’s such a great country.”