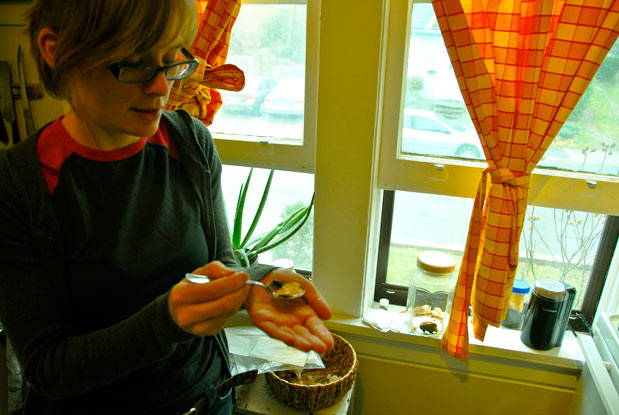 Earlier this week, Toronto biochemist Abigale Miller auctioned off her colony of mealworms as she prepares to depart the city for a new job in Shanghai. Miller recently completed a three-year experiment breeding and eating mealworms, and took to the stage inside the Annex’s Centre for Social Innovation building Monday evening to share her ideas and experiences with insects to a crowd of 35 as part of a food lecture series.

For Miller — who never liked bugs or thought about insects as a food before the project — the experiment started out as a hobby and then became an alternative food source in the kitchen. “I used recycled foods to feed the mealworms,” she says. “I didn’t have to buy land to keep the colony and used less energy to produce food made from them.”

“The protein found in mealworms is similar to other meat and a good replacement in case we do run out of food. It’s a good alternative, definitely something to think about,” she says. “ They don’t grow as fast as other bugs, but they don’t fly around or escape and are perfect to grow at home.”

Miller bought her first bag of 100 mealworms — roughly the size of two teaspoons — at a pet store near Bracebridge, close to her parents’ home, then set about the task of raising them at a mealworm farm in her east end apartment in Toronto.

For the first six months, Miller would sit and stare at them feeding off the bran inside three containers. She had planted her mealworm colony in a system that coincided with their three stages of life – larva (the edible mealworm), pupa (kind of like a butterfly’s cocoon stage) and adult (they grow into beetles, and don’t bite or fly or move fast at all). The top container had hundreds of beetles. When they laid eggs, they would fall through the sieve-mesh flooring to the mid-level container; when they grew into pupa, she would place them in a separate container until they grew into beetles, then they would be placed back in the top container to repeat the process.

I want people to think about mealworms, and why they object to it. Just because they’re icky is not really reasonable.

Miller confesses that during the initial stages, she did a lot of mothering. “I got excited when they had babies and was often worried about the room temperature and why they weren’t growing fast — did they have enough water?” she says. “ But I soon figured out they’re quiet, robust and didn’t require so much attention.”

Before she explored the culinary side of mealworms, Miller decided to grow a few generations of them first. “That way, I know what I’d been feeding them before eating them.”

During a routine week, life with the mealworms was seamless. Miller spent two 30-minute sessions cleaning the containers, picking out the dead beetles and topping up their main food supply of bran or dry cereal. She also found that they did just fine when left in the dark; they don’t have a need to be exposed to light like plants. If you put them in the fridge, they sleep and their growth stops, but when you take them out, they wake up.

Last year, during the Harbourfront Centre’s Too Cool for School Art and Science Fair, Miller finally got the reaction she craved. Her project: capturing people’s responses after they’d had eaten a fried mealworm. During the exhibit, a woman opened a container to sample one of the cooked mealworms. After seeing a whole pile of them, she shrieked and ran off.

“The woman eventually came back and tried one of the fried mealworms, but it was like she was swallowing a pill,” Miller says.  “It’s by far the best reaction I’ve come across.”

Then, in the exhibit guest book, one man wrote: “This exhibit makes me want to vomit. I can’t believe you call this art.”

“That’s what I was going for,” she says. “I wanted people to think about mealworms, and I’m interested in what questions they have, why they object to it. Just because they’re icky is not really reasonable.”

The first batch Miller ever cooked was fried in garlic and onions. Her friends thought she was crazy, but “in my head I had built this up. My family, friends, they were all waiting for me to try it someday and I simply had to do it,” she says.

And the taste? A toasty, benign, nutty flavor.

After a while, Miller turned to baking the larvae and found staple dishes in flax crackers, mealworms covered in chocolate (chocolate is good with everything, right?) and even tossed some fried mealworms in with her salads.

“Most people don’t even think about the food they put in their mouth when they go to grocery stores, but as soon as you mention worms, people are repulsed at the thought of it,” she says. “What about oysters and shrimp? They are all socially accepted foods.”

Toronto’s restaurant scene hasn’t quite caught on to mealworms yet, but insects, like crickets, have been sighted as one-off dishes at The Atlantic and Charlie’s Burgers.

“Right now, thinking of insects as food, it’s on the cusp of either exploding into commercial mainstream or petering out,” Miller says. “ Not sure which way it will go, but it’s worth keeping an eye on.”

Justin Robertson is a freelance writer and editor based out of Toronto. His work has appeared in The Walrus, The Globe and Mail and The National Post.