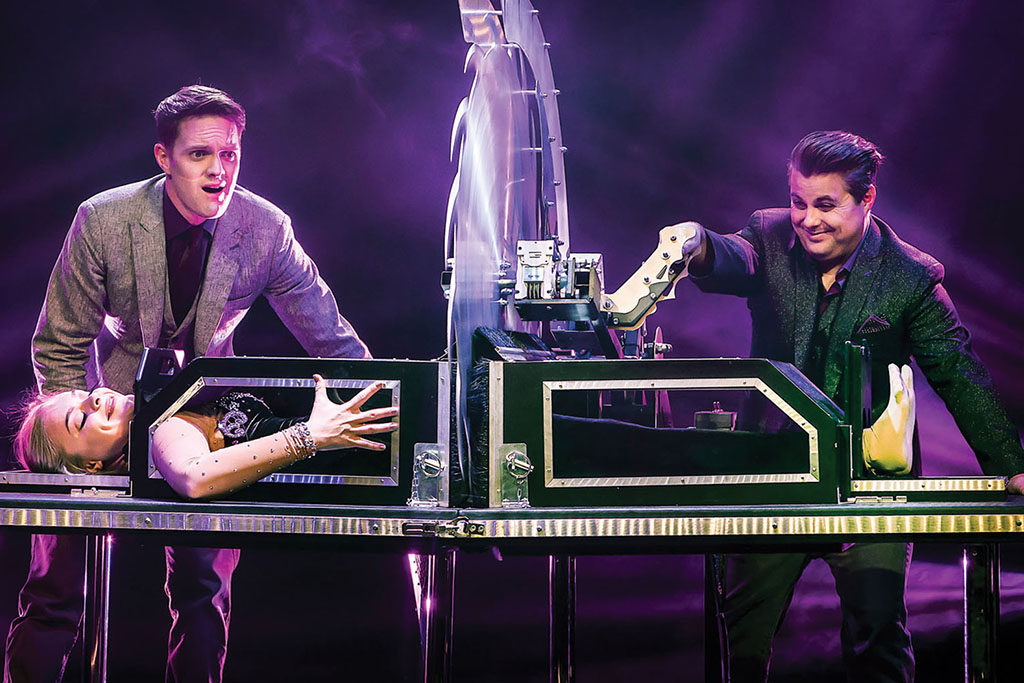 There is a bit of holiday magic swirling in snowy Toronto this month, and it’s not just because of the latest Harry Potter–inspired Fantastic Beasts flick. So what better time for a magic show?

CHAMPIONS OF MAGIC
Champions of Magic, from the U.K., combines the enchanting talents of five of the top tricksters in the world in one gigantic whiz-bang show running Dec. 19 to Jan. 6 at the St. Lawrence Centre for the Arts.

“The show has been running for five or six years, but we just came over to North America last year,” says Sam Strange, on the phone from Denver, Colo.,  where the show is currently playing. “And it was great because over here people are much more enthusiastic about magic than the British are.”

Strange is one half of the magical duo Young & Strange, partnered with his childhood friend Richard Young.

Like pretty much every other magician on the planet, they were introduced to the craft via a magic kit sitting under the old Christmas tree. Tricking their parents once inevitably led to the desire to do it again, and soon Young & Strange were following in the footsteps of David Copperfield.

“We are now in our early thirties, and we’ve been performing magic professionally for over 10 years now,” says Strange.

“Learning magic together was a helpful thing for us because it fostered a competitive environment where we keep trying to outdo each other and that just leads to better and better tricks.”

Joining the duo on tour is mentalist Alex McAleer, escape artist Fernando Velasco and close-up magic specialist Kayla Drescher, who amazes with sleight of hand tricks right in the audience.

Thanks to social media and video-sharing sites like YouTube, magic has never been more popular. Of course, the aforementioned boy wizard may have helped too. Now, young tricksters go straight from the kids’ kit to posting videos online and sharing tips with fellow magicians from around the world.

Still, doing grand illusions such as sawing a person in half with a giant band saw like Young & Strange do takes a bit more time and is not without a few bumps in the road.

Young recalls one particular trick that involved the illusion of smashing someone’s watch only to have it reappear later in a locked box. Of course, to make the trick work, one really should remember the key to said locked box. It was two hours before the watch was returned. Something he won’t forget. Again.

“What we learned though, is to have a checklist,” he says.

According to Strange, each of the acts has its own finale, but all of the magicians take part in the last grand illusion.

“This show has something for everybody,” he says. “It’s fast paced and exciting in a beautiful venue. The seats in the back row are still quite close to the stage. I really believe we are going to exceed expectations. It’s a perfect family thing to do at Christmas.”
27 Front St. E.

THE LOCKHART
Looking for a little post-magic show drink that keeps up the evening’s theme? Head to the Lockhart. This west end bar was inspired by everyone’s favourite boy wizard (him again). Here one can choose something from the Potions and Elixirs menu while sampling a selection of spooky snacks, such as chocolate frogs, all while soaking in the decidedly Harry Potter-esque decor.
1479 Dundas St. W.

MUSEUM OF ILLUSIONS
And no afternoon of magic would be complete without a trip to one of the city’s most Instagrammable hot spots, Museum of Illusions, located just a few blocks east of where Champions of Magic is playing. Here, guests can roam through room after room of illusions such as the popular Head on the Platter room, the Chair Illusion room or the Rotated Room.
132 Front St. E.