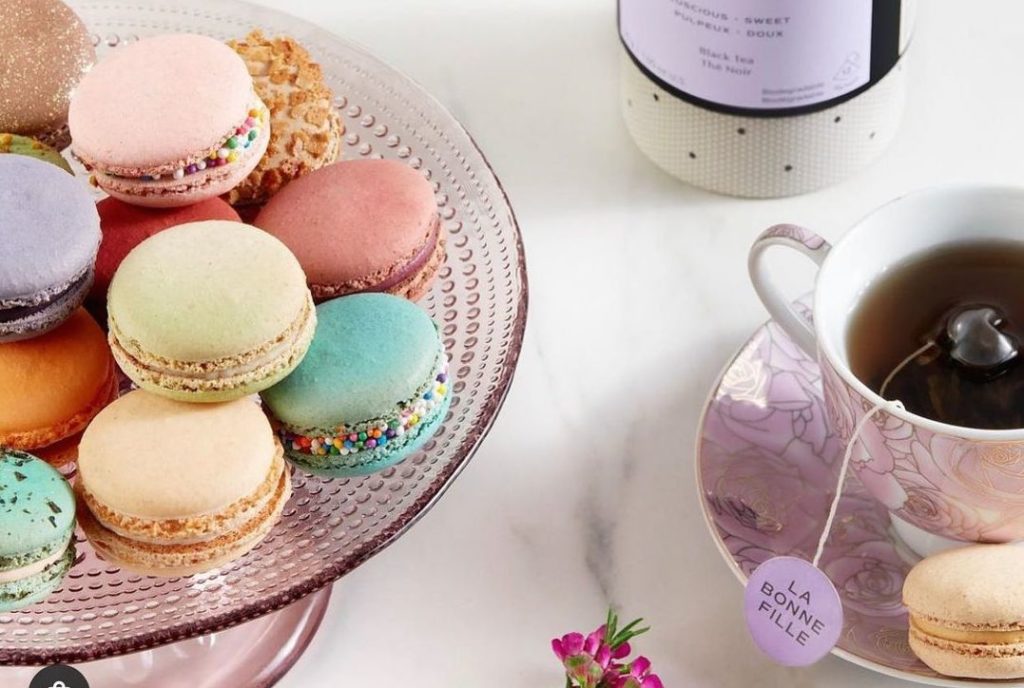 Following last year’s re-opening on Ossington Ave., Delysées‘ latest project features the intricate and dazzling macarons and mini cakes that the brand is known for, but with a slight twist: a high-end tea bar and an upscale croissant-centric brunch experience that are exclusive to the Yorkville location.

The new location has been somewhat of a revolving door for businesses over the last year and a half; at one point, gluten-free cake company Sorelle & Co. occupied the space, as did the Russian-themed restaurant, Moscow Tea Room.

But for owner Fred Naggard, the corner spot at 161 Yorkville Ave., made up of a sprawling 2,600 square feet, is the perfect space to expand the brand.

Having recently finished gutting the interior, Naggard says one of the focal points of Delysées will be the garden ceiling, done by Fred’s wife and interior designer, Khariz Naggard, where 28,000 dried florals in shades of light pink, deep violet and muted neutrals will hang. As far as the displays go, Naggard says this will be Delysées’ largest ever, with 600 miniature cakes out at all times.

“This time around, we’re going with my version of high tea,” Naggard says. “We tried high teas in the area and all are fantastic, but ours are very different and more modern. It gives those in the area a chance to try our mini cakes as well and that’s really important and those are a part of our brand. We wanted to modernize high tea and what’s already out there.”

Like your typical afternoon high tea, Delysées‘ version will include bite-sized cakes and French pastries, like eclairs and those famous macarons. But unlike the traditional three-tiered tower that accompanies most high tea, all of the offerings will be served on stacks of genuine marble.

As far as the brunch menu goes, every item is centred around the flaky and buttery croissant, which Delysées has been expertly baking for the last decade. “You won’t be able to order bacon and eggs here, for example, but you’ll be able to order a croissant eggs Benedict,” hints Fred, who is still in the middle of executing the final menu. Brunch items will be a mix of savoury and sweet options, including a French toast croissant as well as a smoked salmon and cream cheese croissant. All brunch items can be paired with a green salad or roasted potatoes. For those looking for a quick bite on the go, Delysées Yorkville will also feature an exclusive croissant bar with 18 varieties.

New desserts include a modern take on the baba au rhum (a traditional French cake soaked in rum) finished in gold. Delysées’ mini sandwiches will also return to the Yorkville location, and will all be served on freshly-baked brioche that are made to order. Fred says that there are four confirmed mini sandwiches, including the classic croque monsieur (a grilled ham and gruyere cheese).

Like any scrumptious brunch, Delysées Yorkville will also serve hand-crafted cocktails, including several specialty tea-based cocktails, as well as drinks that are paired exclusively with dessert offerings. The cocktail bar will remain open past brunch hours and well into the afternoon and evening, making this new spot the perfect place to enjoy a sweet treat and wind down with a drink.

Stay tuned for the official opening by visiting the Instagram page!