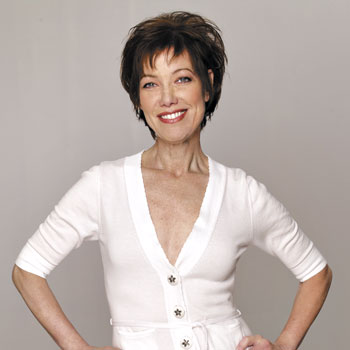 AFTER DEFYING GRIM odds and beating pancreatic cancer last year, prominent Canadian journalist Libby Znaimer says she remembers feeling as if, suddenly, all the time in the world opened up to her: “One of the things that you find, when you’re finished treatment, is ‘I have all this time, now, what am I going to do?’”

These days, the Wychwood Park local finds herself busier than ever. In addition to helping older brother Moses Znaimer grow and strengthen the ZoomerMedia empire (which includes Classical 96.3 FM and Zoomer magazine), she is a recently appointed Pancreatic Cancer Canada spokesperson and is doing what she can to raise both awareness and money to help others outlive cancer.

“It was a big effort. We really gave it a lot of publicity,” says Znaimer, of the 30-person team. The walk wasn’t the first time Znaimer has been public about breast cancer. In 2007, she published a book called In Cancerland, detailing her own journey with the disease, its physical and mental toll and how she learned to cope and continue to enjoy life.

Znaimer first became aware that she might have breast cancer after finding a lump late one night, just 10 weeks after a mammogram.

When she was officially diagnosed in June 2006, her life changed rapidly. “Suddenly your life is full of doctors appointments,” she says. After nine months of treatment, followed by surgery, Znaimer found herself in remission.

However, barely a year passed when stomach pains sent Znaimer back to the doctors where she received an even more grim diagnosis: pancreatic cancer.

She said pancreatic cancer is often considered a silent killer.

There are few symptoms, and often by the time a person is diagnosed, the cancer is well advanced. After five years, the survival rate from pancreatic cancer is approximately five per cent. In addition, Znaimer says it is very difficult to decide on a treatment plan because of all the scientific information patients need to disseminate.

“We’re not in the old days where the doctor tells you what to do. It’s very, very complicated,” says Znaimer. “You have to take in and understand all this stuff that you’re not necessarily prepared for.”

However, in an odd twist of fate, her trial with breast cancer gave her a reason to hope. After the 2006 diagnosis, Znaimer was tested for a genetic mutation that, when present, puts people at greater risk for breast cancer. She came out positive.

In the face of pancreatic cancer, that same genetic mutation opened up an innovative treatment that Znaimer decided to try. It worked. Znaimer says the doctors were shocked. She herself wasn’t sure she’d survive. “You read the statistics.… I didn’t really expect to survive, but I have,” she says.

Znaimer says outliving pancreatic cancer has encouraged her to act in the now.

After treatment, she says she focused on a home renovation and was excited to get back to work, where she is now the vice-president of news and information at Classical 96.3 FM and AM740, as well as host of The Zoomer Report. She also got in touch with Pancreatic Cancer Canada to help profile the disease.

Currently she is writing a pamphlet for Pancreatic Cancer Canada, which she wants to complete for this November: Pancreatic Cancer Awareness Month. Znaimer is also preparing for an office move, completing articles for Zoomer magazine and enjoying life full tilt.

“Frankly, it may come back, so I want to do everything that I want to do as quickly as I can do it because that’s just the way to be,” says Znaimer. “It’s living in the moment.”