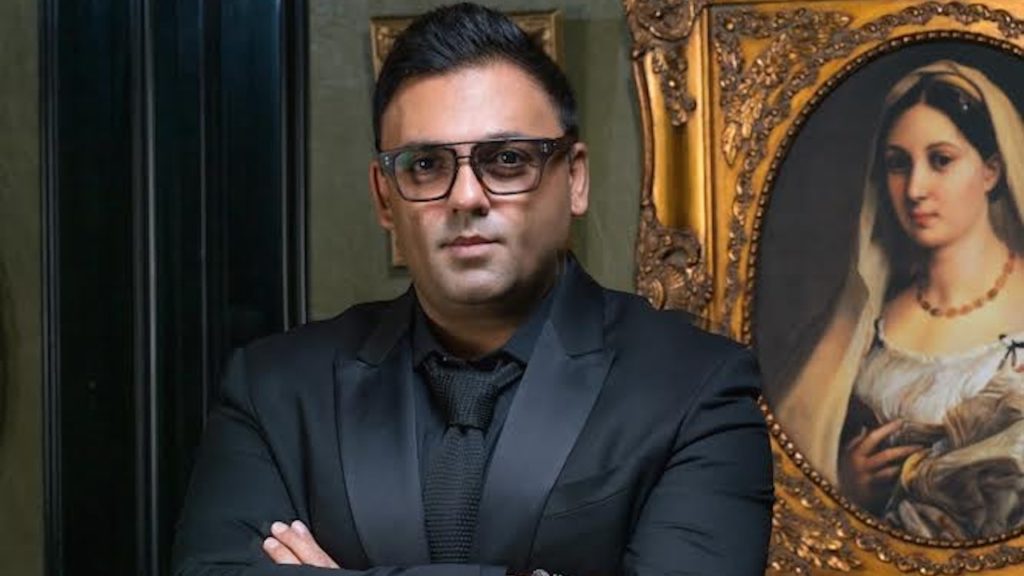 Before a wall of bottles and opposite an army of vintage shoes, Hanif Harji sits behind his massive desk as his phone lights up like a Canada Day sky. Harji, who owns 20 restaurants and 20 more Miss Jones cannabis dispensaries, has 1,240 staff, and if he isn’t the city’s premier restaurateur, he could still sabre a champagne bottle from his Scale Hospitality headquarters on Wellington Street and have its cork hit four hot spots he owns.

“The city has matured. We have the Michelin Guide coming in and restaurants in Toronto can compete with anywhere in the world—New York, Miami, L.A., anywhere,” says Harji, ignoring his phone, which is a true sign of confidence. “This summer, I’m working harder than I ever have and balancing price increases with consumer appetite to spend, but diners are also in a really good mood and there’s a positivity, almost an appreciation, that we’re seeing in all of our restaurants.”

His restaurants include such buzzy staples as Patria, Byblos, Lapinou, Pink Sky, the Miller Tavern and more, but one of the main reasons behind all of his phone fireworks on a summer Friday is the reopening of Le Sélect Bistro, the buzziest reservation in town. Le Sélect, which was opened by Frederic Geisweiller and Jean-Jacques Quinsac in 1977, was equal parts Algonquin round table, local watering hotel and New York City’s Pastis. However, when the original owners found their rent no longer tenable, a huge void was created where gossip and intelligent French food could be found. New owner David Aisenstat, former CEO of the Keg, approached Harji, and together they helped reinstate a Toronto touchstone—judging by Harji’s cellphone, the response has already been deafening.


“There’s a trueness to it. Everything about that place is designed with love,” says Harji, who adds that he kept the bones of the original and much of its menu, including classic French bistro fare like escargot, duck l’orange and cassoulet. “Who are we to come in and think we can do better? We wanted to stay true to what it represents to so many people, and David believes in the same thing we do: building things that will last.”

Building things, however, has become so fraught in our post-COVID era of discontent that not only does Harji have to deal with inflation, where price increases on everything from gasoline to fish have made profit margins tight, but also a shrinking labour force. To combat the crisis, he’s started the Scale Learning Lab, which enlists previously inexperienced workers and teaches them how to work in upscale hospitality, with a guaranteed job after class. True to form, he’s creating a solution to a problem he couldn’t have predicted but needs to solve to keep restaurants running all over town.

“A good restaurant will make 12 per cent profit, and a really well-run restaurant might do 15 per cent — if they have the right volume and rent. Most restaurants, however, run a five to eight per cent margin,” Harji explains. “When costs go up, that downward compression is taxing on restaurants, not just us, but everyone, and this is all over the world. I just hope consumers see it at the grocery store and understand this is a product of the world we live in today.”

Despite this challenging environment, Harji can’t stop expanding. He has a luxe sushi restaurant with Antonio Park opening on the 51st floor of the Manulife Centre this fall and a Caribbean restaurant called Miss Likklemore’s in the works. All this, and weed.

He says his business partner Terry Tsianos introduced him to the notion of selling cannabis and that industry, where huge Canadian public cannabis companies keep finding new stock market bottoms and the rash of dispensaries has become absurd, needs time to mature.

“Cannabis is here to stay, and I feel good about the business. We just need to ride it out for a couple of years and hope the market adjusts itself,” says Harji, whose upscale Miss Jones shops aim to recreate the Starbucks environment for soccer moms and not only sell dime bags and eights (quantities of cannabis) but also yoga mats and hoodies.

Longevity again is the common theme around Harji, who got his start in restaurants opening a Second Cup while he was still in university, and he says his drive to make something unique and authentic in the city is real. Born in Tanzania, he was raised by a homemaker and a TTC cleaner, and his household was loving with brilliant food, but he never had a silver spoon.

At 48, and this could be part of his passion for Le Sélect, he sometimes sounds as if he’s thinking about his legacy.

“I’m not interested in of-the-moment. Lasting power is the only thing that interests me,” he says. “My commitment to doing things right has gotten more intense as I’ve gotten older, but when it all comes together at a moment in time in a restaurant, it breathes life into me. I’m fortunate to be in the place that I am.”