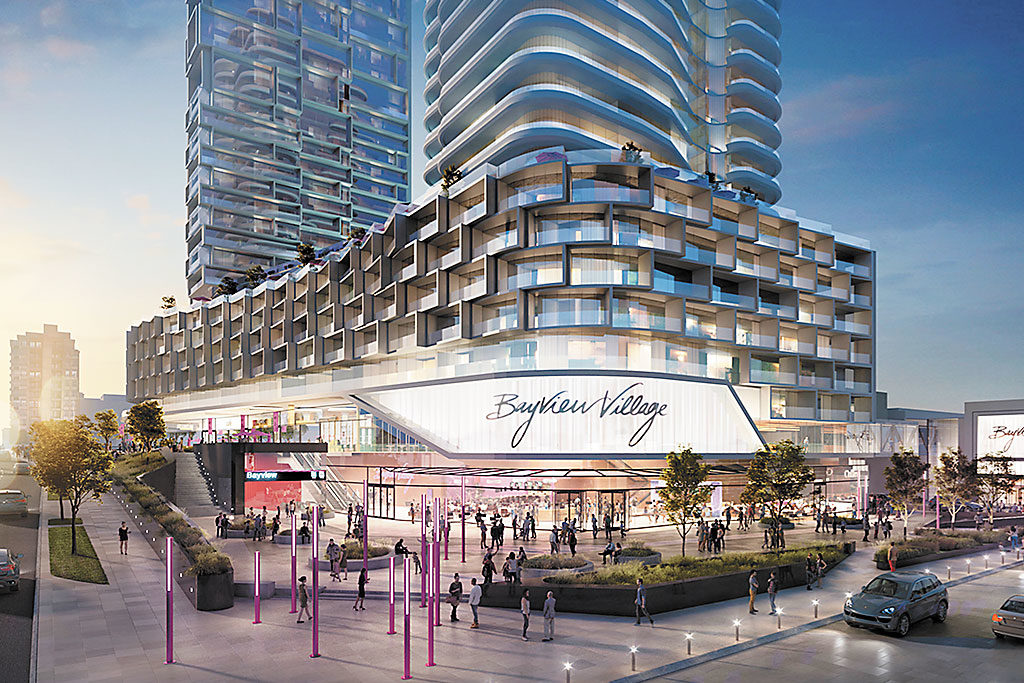 A hot property market and a changing retail landscape have led to a series of redevelopment proposals involving a number of GTA malls stretching from south of Bloor Street up to Thornhill, raising concerns amongst local residents and a city councillor.

Shopping centres with abundant parking lots could be the last large development sites left in the city. As a result, there is a certain expectation that plans of this magnitude take into consideration the pressing priorities of the day: affordable housing and green space.

One such proposed redevelopment is of the shopping centre at Bayview Village in North York. QuadReal Property Group, on behalf of owner bcIMC realty corporation, is seeking an amendment to the City of Toronto Official Plan to build five buildings of between six and 33 storeys, amounting to 1,036 residential units, as well as a retail expansion and a five-storey parking garage.

There are some outstanding concerns from the community. Ward 17 councillor Shelley Carroll mentioned traffic and parkland as two major issues regarding the redevelopment proposal.

“You always have to give consideration when you’re sitting right on top of a subway station. Any proposal, even though it may be dense, you have to look at it, because that is the city’s official plan to intensify around subways,” said Carroll.

“That being said, this one has some major issues that have to be ironed out. All of the areas around the stations on Line 4 [Sheppard] are intensified such that we really need to grab and hang on to some green space for some pretty dense living conditions,” she said, noting that any cash paid by the developer for parkland will not be enough to purchase land in the area, so she would like to see parkland created on the site.

An item adopted by North York Community Council on May 22 and due to be considered by Toronto City Council on June 18 recommends that city staff attend an upcoming LPAT hearing to oppose the  official plan amendment.

Further south, Primaris Management Inc., owner of Dufferin Mall, is exploring opportunities to redevelop the northern portion of the site.

Primaris hopes to include purpose-built rental housing, park space and an extension to the existing mall in the redevelopment. Primaris is currently conducting a series of open houses ahead of a development application.

The site is located just a few blocks south of Galleria Shopping Centre, which after years of decline, is set to be redeveloped into a series of residential towers, parks and a community centre.

Maggie Hutcheson is a resident of the Bloor and Dufferin Street area and a co-chair of Build a Better Bloor Dufferin, a community group that advocates for equitable development in the area.

Her group wants to ensure that any large scale developments include significant community benefits.

“We’re looking for significant affordable housing, adequate park space. We want to make sure schools are built well and have room for new residents,” said Hutcheson.

“We are looking for community space, and essentially we want to make sure the neighbourhood and the city at large are livable and inclusive.”

Hutcheson said, although it makes sense to replace parking lots with housing, she has questions about whether these will be affordable or luxury units and is concerned after hearing from Primaris that the units will only be rental in the absence of rent control.

“We welcome the development if it includes affordable housing and community space, she said, “and enough park space for all of the new residents and old residents to enjoy.”