Lacing up opportunity - Streets Of Toronto
Skip to content 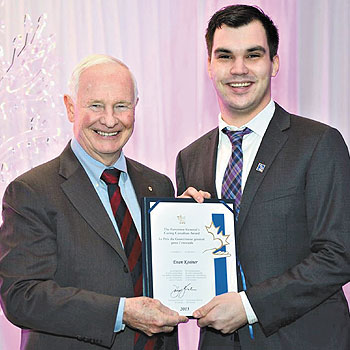 Few things are more quintessentially Canadian than watching a child lace up a pair of skates and take that first wobbly stride on the ice. It’s a right of passage for most children, but many have to overcome more than balance and gravity before it can happen.

Forest Hill’s Evan Kosiner is convinced enough old pairs of skates and used helmets are sitting in Canadian garages to make taking to the ice a reality for Canada’s underprivileged youth. His charity, Skate to Great, redistributes donated equipment to the kids that need it the most. An entrepreneur by trade, Kosiner brought together a network of corporate partners and handed roughly 3,500 pairs of skates in the charity’s first year.

“We’re working to create a team between the best companies, charities and sports organizations,” says Kosiner. Skate to Great accepts equipment at over 50 StorageMart locations from Vancouver to Quebec City. FedEx handles the shipping, Lowe’s provides bins, and 1-800-got-junk deals with the garbage. Partners such as Big Brother Big Sisters of Canada and Courage Canada distribute the donations.

“When we were working with Courage Canada, we had a group of visually impaired kids on the ice at Maple Leaf Gardens. Ryerson University’s figure skating and hockey teams came out to help them around the ice,” Kosiner says. The funding Skate to Great receives from its corporate partners mostly goes to skate sharpening and buying new laces. Kosiner hopes to continue to grow the project to reach even more kids.

“To me, nothing says growing up Canadian more than skating.”