Keeping spirits up - Streets Of Toronto
Skip to content 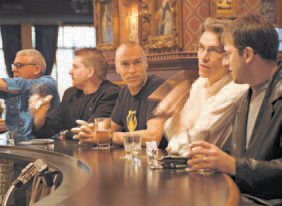 WITNESSING A FLOOR snap and crumble under the weight of hundreds of fans dancing up a storm to the Spirit of the West classic “Home for a Rest” could be considered a fluke, once-in-a lifetime occurrence. But when John Mann, one of the founding members of the seminal Canadian band, mentions that the big break at the Kee to Bala a few years back wasn’t the first time, well, if nothing more, it speaks to the staying power of a band that can create such a dance floor disaster more than two decades after it was first formed in Vancouver, B.C.

When the band checks into the leafy confines of the Molson Amphitheatre, Aug. 22, opening for Great Big Sea, they will bring with them 26 years of experience criss-crossing the country with their addictive blend of rock and Celtic roots music.

Many of their songs — “Political,” “Old Sod,” “Save This House,” — are party-mix and pub standards. Their big hit, “Home for a Rest,” was named the 22nd greatest song in Canadian history by the CBC and was responsible for not one, but at least two broken floors — one at the Commodore Ballroom in Vancouver and one at the Kee.

“I would never say that was our best song,” says Mann. “Our best party song, for sure. I would never slag the song; it has done so well for us. How can we not love playing it?”

The song, according to Mann, chronicles a week of pub-fuelled shenanigans while the band was on their first overseas tour and their London gigs were cancelled when a fellow Canuck by the name of k.d. lang scooped up their shows.

“We arrived and were told that we’d been blown off and that k.d. lang had taken the gig from us,” says Mann. “So we had a week off, and basically we just stayed in the bars and drank ourselves silly, having just a fantastic time, and then carried on with the tour.”

The band formed in 1983 after Mann pretended to know how to play guitar to get in on a friend’s wedding gig in Whistler, B.C. “We didn’t have much of an auspicious start,” Mann laughs.

“We just connected, and we always had a rock energy and played all the rock rooms in Vancouver. At the same time, Jeffrey brought all the Celtic instrumentation that allowed us to straddle the folk world at the same time.”

Around 1997, the band lost one of its key members and decided it was time to pursue other projects. Mann got into acting and is starring in a production of Les Miserables. Geoffrey Kelly, the band’s other remaining founding member, plays with Celtic folk band the Paperboys.

But with long-time members Hugh McMillan, Vince Ditrich and Tobin Frank, they would play shows every year and release an occasional album, such as last year’s Spirituality, a massive, 33- track greatest hits package with two new songs.

“The fact is that we are all great friends on the road and we have a blast together,” says Mann. “We’re a tight-knit family, and that is one reason, as much as the music, that we keep it going.”