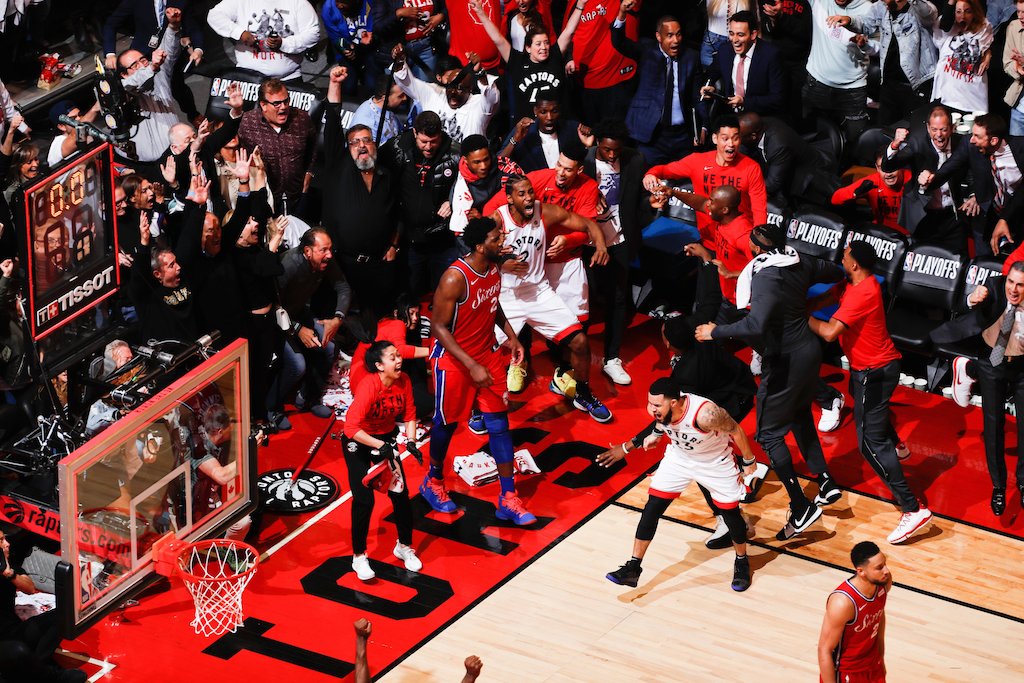 It was The Shot heard around the world. And it happened right here in Toronto on May 12, 2019. It seems like a bygone era at this point, but it still sends shivers. It is worth reliving again and again.

One year ago today, the Scotiabank Arena was filled to capacity and then some.

It was a back-and-forth game the Raptors should have been leading, but for some reason, the team just couldn’t pull away from the pesky Philly squad.

And so it goes, the Raptors were left with one last chance to win the game. Each and every person was on their feet cheering on the Toronto Raptors who were tied 90-90 with the Philadephia 76ers in Game 7 of the Eastern Conference semi-finals.

With time winding down, Raptors star Kawhi Leonard got the ball at the top of the key, dribbled right along the three-point line brushing off 76ers guard Ben Simmons. The imposing figure of Joel Embid was waiting in the corner. At the buzzer, Leonard hoisted up a shot from deep in the corner, arcing impossibly high over Embid’s stretched out arm. The ball hit the rim, it hit the rim again and again and again before finally dropping through the hoop.

This angle of Kawhi’s shot is incredible. 😮

The crowd, the players and the city erupted. I was watching the game at home in the Beach neighbourhood of Toronto and I heard the thunder of the crowd. It was the defining play of a franchise on its way to a first NBA championship and will go down as one of the city’s greatest sporting moments. It will forever be, The Shot.

“I was trying to crash [the glass]. At first, obviously, it looked a little short but you’re trying to read where the bounce might go and you try to get the rebound. But the ball went straight up and it took a crazy bounce, then it took another crazy bounce and then it just stopped for a second, at least it felt that way from where I was. And I think, like I said before, the energy from the crowd and from the whole city just made the ball go the other way and go in,” Raptors centre Marc Gasol was quoted as saying following the game.

And the city is celebrating yet again on the first anniversary of that special moment, and why not? We need it.