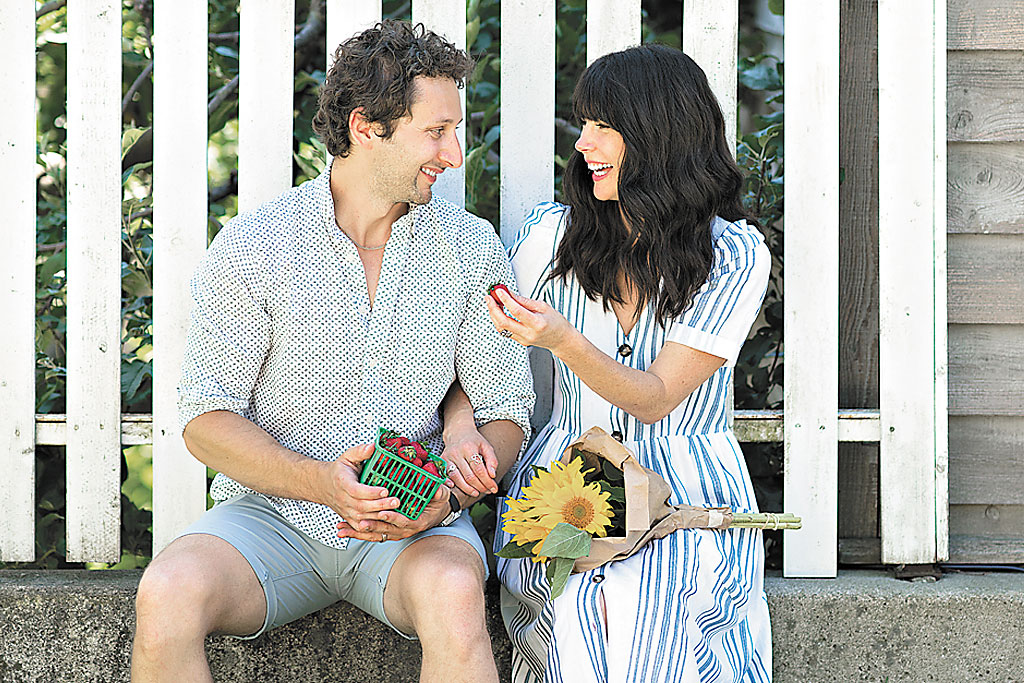 Joy McCarthy is the holistic nutritionist behind the Joyous Health brand and website that includes podcasts, books and a very popular YouTube channel. McCarthy is also releasing her latest cookbook, The Joyous Cookbook, on New Year’s Eve. Here we chat with her about how she met her partner in business and in life, Walker Jordan.

We met very randomly. I was walking along Spadina Avenue one sunny afternoon, and I saw a sandwich board sign that read LIVE BODY. I looked in the window and realized it was a personal training studio. I called the number on the sign and asked to speak to the owner in hopes that I could meet with them and collaborate to offer my nutrition services to their clients. We set up a meeting a few days later. I met the owner in person. His name was Walker Jordan.

We spent a lot of time together as friends when we were crushing on each other at Merchants of Green Coffee. That was before we were official, but I believe our first date was a Rawlicious in the west end.

After about a year and a half together, we went to Paris because we both love to travel (especially in Europe). It sounds really magical, but it’s quite hilarious what happened! On the second to last night, Walker had planned for us to have drinks on the rooftop of a gorgeous hotel. After walking around all day — like over 10 kilometres of walking — we decided to stop at a café and have a small bite but not ruin our appetite for our rooftop dinner. We both ate so much cheese and bread I had the worst bellyache. We headed back to the hotel to get changed and freshen up for dinner. I could barely put on pants I was so bloated, but we made it out again. We stayed at the rooftop patio for all of 10 minutes and one drink because my tummy hurt so much. We went back to the hotel, and while getting ready for bed, Walker sits down beside me and says, “I’d like to ask you something,” and here we are six years married. The proposal couldn’t have been more perfect and in true Walker fashion — chilled out and relaxed, not on some fancy rooftop!

We got married in 2013 at a golf course just outside of Toronto. We had about 150 friends and family at our wedding. It poured rain all day, and then, just when I walked down the aisle, the sun came out. It was like some sort of message from the heavens! We went to Italy for our honeymoon. We went to Positano for a few days, then spent five days in Tuscany in the same village — Cortona. Then five more days in the Trastevere area of Rome — known for amazing food!

We have one daughter, Vienna, who is four, and she’s like a ray of sunshine. She is named after our favourite city, Vienna, the beautiful capital of Austria. She is very artistic, loves cooking and baking with us, and becoming parents has been one of the best things to happen to us.

We don’t really talk about work outside of being at the office. Sometimes we come up with really great ideas when we are having a date night! It is so much fun to work together.

We love hiking, biking, walking (I mean how could we not when one of us is named “Walker” and travel. We both love cooking and take turns making meals.

We live in the High Park area. We’ve been here since 2015 and moved in when our daughter was six weeks old.

I don’t know that I will ever retire, because I love what I do so much, and it’s such a creative outlet for both of us. Walker does all the food photography at Joyous Health, and I make all the yummy stuff! There will come a time when we will definitely work less and travel more. I would love to spend part of the year somewhere warmer.