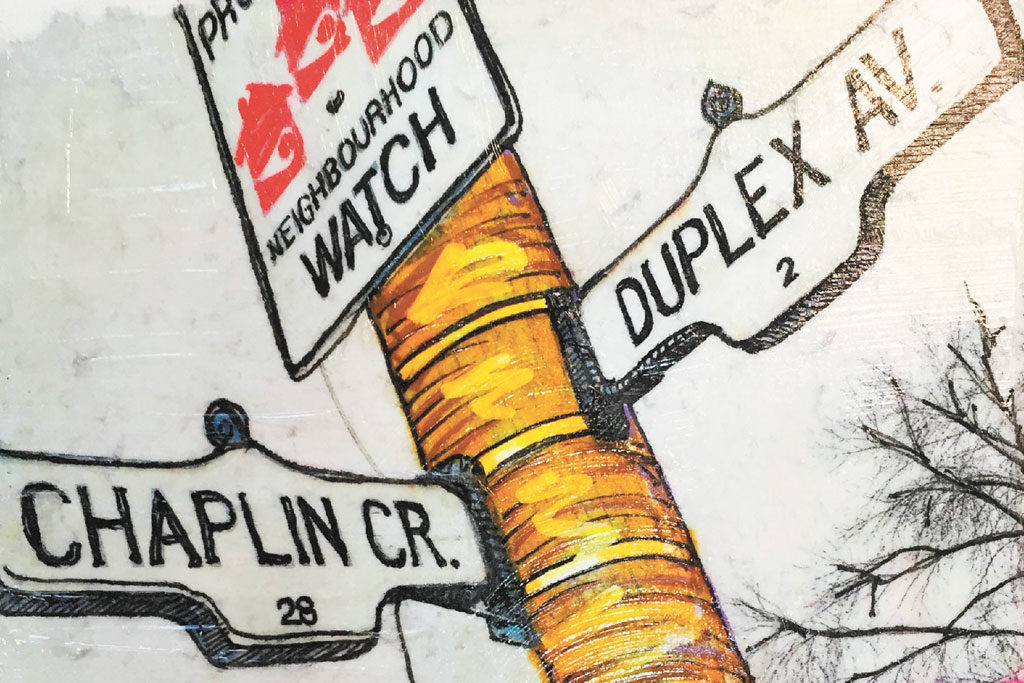 Born in Barcelona, raised in Edmonton and now based in Toronto’s Swansea neighbourhood, Jorge Molina has undertaken a mammoth art project that celebrates the beauty in everyday life.

The 416 Project consists of 416 unique six-by-six-foot canvases that Molina painstakingly creates and hangs on the city’s wooden utility poles in neighbourhoods throughout Toronto. Each canvas captures mundane objects in the vicinity of the utility pole — a manhole cover, a traffic light — and elevates them to the sublime.

“I think that art is everywhere,” says Molina. “These things that we see every day — this visual noise — we see them but we don’t really see them. I think there’s beauty in all that stuff.”

When viewed en masse, the canvases become a celebration of life, of the beauty in what is all around us.

Anyone with a screwdriver is free to take a canvas and keep it. There has already been great interest from the public, with many of the canvases being claimed almost as soon as Molina hangs them. It has become a source of minor frustration to the artist who wishes members of the public had more time to enjoy the paintings before they are claimed. However, this interactive element remains at the heart of his work.

“I just love to share art. A lot of people don’t go to galleries. They can’t do that sort of thing or they don’t even think about doing that sort of thing,” he says. “So here’s a piece of art for you, you can enjoy it for awhile, now take it home.”

When interviewed, Molina had just hung his 208th canvas and with it reached the project’s halfway point. Although the project is taking longer than he had envisioned, he says his energy and enthusiasm have not faded thanks to the support he has received from the public.

Molina aims to finish by early June as the artist — who is also an actor — will begin rehearsals for his performance in The Hogtown Experience, opening on July 6 at Campbell House Museum.To keep up with The 416 Project and find out when it will arrive in your neighbourhood, you can follow along at www.the416project.com.