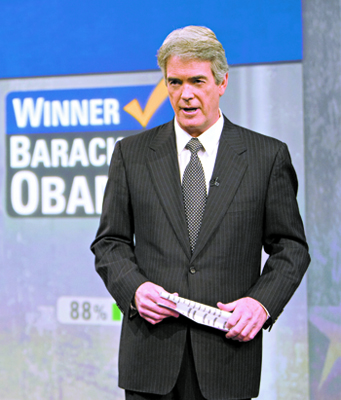 IN HIS LAST year of high school, future CNN anchor John Roberts would sneak over to the local pub, the only place he could get a beer at his young age. The pub piped in the University of Toronto student radio station. Roberts would be starting a science degree at U of T in September and thought radio would be a great way to get involved in the school.

“I ended up doing a show there and got involved in the operation of the station. That was a great entry into the world of broadcasting,” he says.

Today Roberts, 52, has moved on to become a major player in the news game as co-anchor of CNN’s flagship morning show American Morning alongside Kiran Chetry. The show has a hard-news focus, with a team of correspondents who deliver breaking news to early risers around the world each morning. It airs weekdays from 6-9 a.m. EST.

Roberts joined CNN in February 2006, but this past year was the most demanding, with the presidential election and all that comes with it.

“I was on the road for the first two months of last year, crisscrossing the country and going to all of the primary states,” he says.

“For a political junkie and a guy who loves to be out on the front lines, it was just about the most fun that I could ever imagine having.”

During President Obama’s inauguration in January, Roberts was on the press riser in front of the Capitol, about 100 feet from where Barack Obama took the oath of office. “It was an extraordinary vantage point to witness history from,” says Roberts.

But there is no question that his term will provide amazing journalistic opportunities, which presents a mixed blessing, suggests Roberts.

“If I weren’t doing the morning show, I would love to be back [in the] front row at the White House watching this history unfold,” he says.

The CNN gig is only the latest for Roberts in a long broadcasting career that has ranged from interviewing Canadian musicians for MuchMusic to sitting down with world leaders at CBS and CNN. Now, he is returning to his hometown on March 12 to be inducted into the Canadian Broadcast Hall of Fame during Canadian Music Week (CMW).

When Roberts returns to Canada for the induction, he will also be visiting his sister and his 95- year-old mother. And, of course, it will be a great opportunity to see the city again and catch up with old friends. One of these old friends, Neill Dixon, president of CMW, was the one who notified Roberts of his impending induction.

“He is probably at the pinnacle of his career,” Dixon says of Roberts. “He has gone from being a guy running around with a hand-held camera backstage with bands to now being an anchor with CNN. He is certainly a news icon and an inspiration to young broadcasters in Canada.”

Roberts’s record speaks for itself. He was embedded with the U.S. Marines during the war in Iraq; he has interviewed former presidents George W. Bush, George H.W. Bush and Bill Clinton, former Vice President Al Gore, the late Yitzhak Rabin and Pakistani President Pervez Musharraf. As anchor, Roberts has covered the death of Pope John Paul II and the papal succession; the Atlanta Olympics bombing (“I stood on a roof for 11 hours, broadcasting, a lot of that time by myself…); the Oklahoma City bombing; the kidnap and murder of tourists in Uganda; and the fire at the Branch Davidian compound near Waco, Texas (“I just happened to be the standby anchor that day and I was on the air within moments”).

Roberts was also down in New Orleans for Hurricane Katrina alongside colleague Anderson Cooper. In the early going, it looked like nothing much had happened, says Roberts. But as time went on, they began to realize the severity of the disaster. “We went out to the eastern part of the 7th Ward and found that it was under eight feet of water. So we kept out on one of the rescue boats that were going around trying to pull people out and saw just how serious the situation was.”

As a newsman, Roberts has seen the world. But it was here in Toronto that Roberts got his start. In his early days, he hosted a onehour heavy metal video show called The Power Hour on MuchMusic. Roberts remembers his time at the station with fondness, especially during its introduction.

“We sort of launched a crosscountry promotion blitz,” he says. “We were trying to turn it into a nation-wide phenomenon, so we went to every little town across the 10 provinces. And that, together with my time at the NewMusic, where we literally travelled the world tracing the socio-economic roots of music, just really gave me a broad experience.”

But Roberts — known then as J.D. Roberts — still dreamed about reading the news. It was during this time that he and his wife settled into a house on the edge of Forest Hill. “It was a lovely place to be as a young couple,” he says. “Her parents were kind of against the idea. They wanted us out in the suburbs, but I was in the city, and I really wanted to have the city experience.”

As Torontonians know, central to that experience is cultural diversity of the city. “To immerse yourself in a society like that, for a young person, was a really great experience,” Roberts says.

The couple used to go to Bloor Street to have Indian food and to Dufferin for Italian. Their neighbours would play bocce at Vermont Square where Roberts would also walk his dog.

Then, in 1989, Roberts ventured down to a CBS radio station in Miami. He returned to Canada in 1990 to co-host CTV’s morning show Canada AM, but his move down to CBS News in New York came soon after.

“I never thought that I would spend 14 years anywhere, but it went by in the blink of an eye,” he remembers. “Really, it was a series of tremendous opportunities to both see the world and cover the news from a position where I really had a first-class seat to history.”

While Roberts is flattered by the induction into the Canadian Broadcast Hall of Fame, the honour, which is voted on by industry executives, caught him by surprise. “I didn’t even know they were paying attention to me,” he says. “I was surprised and deeply honoured that I would even be considered. I left Canada permanently — or at least what I considered permanently — in 1992, and the fact that they were keeping their eye on me from afar really is pretty incredible.”