Jennifer Podemski: the actress speaks out about Native rights and the release of her powerful new film, Running Wolf - Streets Of Toronto
Skip to content 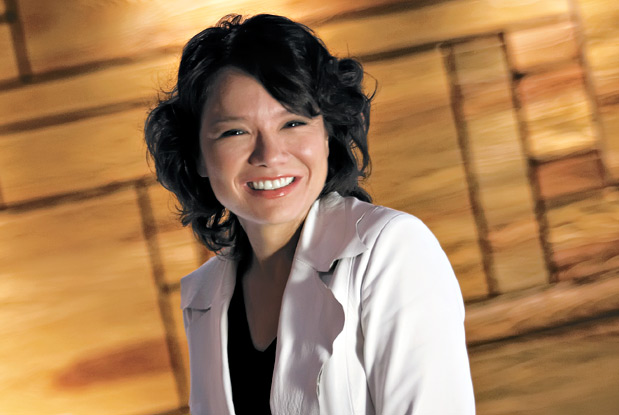 Any Canadian who owns a television probably recognizes the face of Jennifer Podemski. The Torontonian has been gracing small screens since the tender age of 12 when she got her first paid gig co-hosting an episode of the CBC’s Wonderstruck, a science show aimed at kids, alongside Bob McDonald.

“I didn’t know much about TV at the time,” Podemski says. “But when I did that job, I got the bug. And I got it pretty immediately.”

Since then she’s built up a hefty resumé that reads like a page ripped from “TV Guide Canada,” having appeared in everything from Riverdale to The Rez to This Is Wonderland, Blue Murder and Degrassi: The Next Generation (not to mention her fair share of big screen credits, including a role in Sarah Polley’s 2011 sophomore feature, Take This Waltz, opposite Seth Rogen, Michelle Williams and Sarah Silverman.)

At just 39 years old, Podemski has already spent over a quarter-century in front of the camera, with more than 35 film and television roles and two Gemini nods under her belt.

But despite a bustling and prolific career, she admits she’s had a love-hate relationship with show business from the beginning.

Born and raised in North York, she says her childhood home was “torn apart” by alcoholism, and the performing arts world was a refuge from the storm. But it wasn’t all dark.

She fondly remembers dancing around the house with her mom and being awestruck when her grandmother took her to local ballet and theatre performances in and around the city. It was a welcome reprieve from a childhood that was far from simple.

“That whole experience just really piqued my interest and inspired me. I was attracted to the feeling of escape,” she says. “It was just like that scene in Annie where she goes to the movie theatre, and it’s just this magical place where all your troubles sort of melt away.”

“My goal has always been to inspire young Native people. And I feel like I’m doing that.”

Though she’d cut her teeth on acting by Grade 7, it didn’t take long before the industry showed teeth of its own, and she started to question whether or not she wanted a future in the limelight at all.

“By the time I was 18, I was disillusioned by the business side of it. I was just way too sensitive to the criticism, to the rejection, to the ups and downs.”

The half-Saulteaux, half-Israeli actress has often felt like an industry outsider, always a few skin tones or a few pounds away from what casting directors were looking for. She was never quite thin enough, she says, and either “too white” to play Native or “too Native” to play white.

She also saw more than her share of racism, even from some heavy hitters in the industry.

“I’ve heard famous casting directors say, ‘There’s no room for Indians in this business,’ or ‘Natives will never make it. You might as well dress up someone else because Natives can’t act.’”

It was that kind of ignorance that made her seriously consider walking away from show business more than once. But she was never quite able to turn her back on the industry that had been her childhood respite — not for good, anyway.

She has moved out of the country twice to get away from the pressures of the entertainment world (first to Israel and then to the United States), and both times she ended up coming back to clinch an acting offer that was just too good to resist.

Then finally, after years of slugging through the showbiz trenches, she’d had enough of the racism, the ignorance and what seemed like a pervasive lack of visibility for Native people in the media. She realized that, if she wanted to change the way Aboriginals were portrayed in film and television, she’d have to do it from the inside out.

“I had to do something within myself that was revolutionary and that allowed my culture to speak louder than it’s ever spoken. That’s when I made the decision to start producing.”

So in 1999, along with partner Laura Milliken, she founded Big Soul Productions — a Toronto-based company designed to empower Native people, particularly Native youth, with opportunities both in front of and behind the camera.

“I was always very confused and shocked by the statistics in the industry where Native people really are at the lowest end of representation in Canada and the U.S. So Laura and I really wanted to change that.”

Together, the pair not only threw on their production caps — producing everything from film and television works to stage shows — but also toured the country to directly motivate and empower First Nations youth. They visited Native communities across Canada, speaking to Aboriginal kids and teens and holding workshops to help them build their media, filmmaking and life skills.

Through it all, the pair produced a range of critically acclaimed projects designed to portray Native Canadians in an empowered and honest light, including the prime-time drama Moccasin Flats, which ran for three seasons on APTN and Showcase and garnered as many Gemini nods along the way.

Now Podemski has taken the leap to develop her own production company, Redcloud Studios, and has recently wrapped shooting on her first film, titled Running Wolf.

The multi-generational drama is centered on three Aboriginal women working to heal old family wounds.  Podemski not only co-stars in the film and had a big hand in the writing but worked to raise the film’s funding herself.

“I’m still reeling from the experience of making this film. I’ve had two children, and honestly it was up there with having a baby.” She laughs. “It was magical to make, and I’m so proud of it, but it was also so incredibly challenging.”

Seven years and hundreds of hours of blood, sweat and tears after Podemski first optioned the script, she and director Peter Stebbings (best known for his own acting work in Canadian series like Madison and Traders) are now in Running Wolf’s post-production phase, with plans for a Canada-wide release in the fall.

As for where Podemski stands with that old love-hate relationship with show business, it seems like she’s finally made her peace.

“I’ve always had an inner battle with the creative side versus the business side. But my goal has always really been to inspire young Native people,” she says.

“If I can create dialogues and build bridges through a medium that reaches everybody, then that’s my goal. And I feel like I’m doing that.”