It’s almost spring, and linear parks are set to take over Toronto - Streets Of Toronto
Skip to content 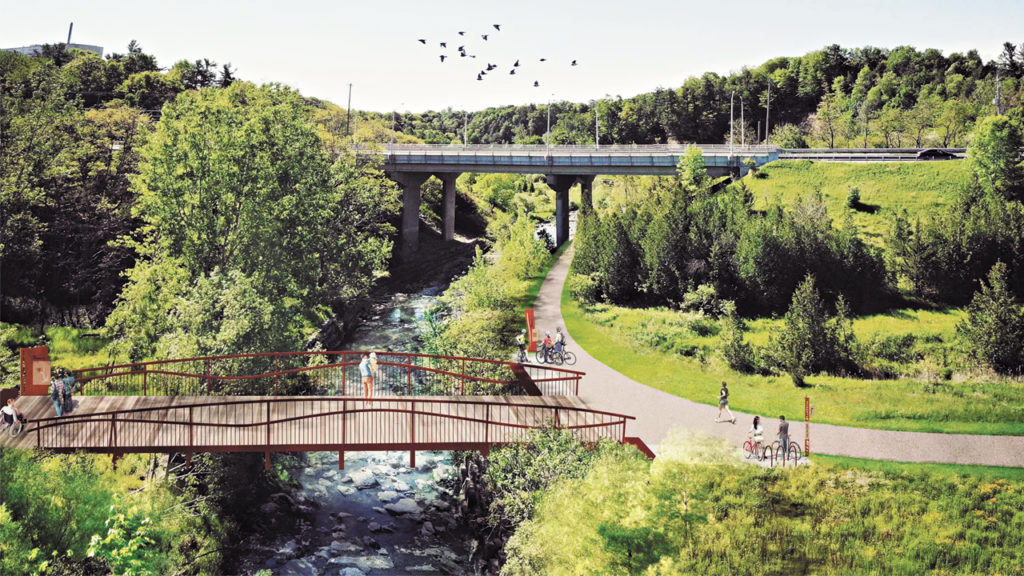 Toronto is home to more than 1,500 incredible parks and green spaces, from the 11 located within the Scarborough Bluffs, to the picturesque, 36-acre Trinity Bellwoods located just west of the downtown core. These traditional urban spaces are crucial for quality of life, especially as the pandemic pushed more people to the outdoors. But one of the most intriguing green spaces gaining in popularity is the linear park.

The distinction of linear parks is that they are significantly longer than wide, can be used to transport visitors across neighbourhoods and are an ingenious way to repurpose underused land.

New York City’s High Line is a prime example of a linear park done right. Built on an elevated rail line that was once destined for demolition, the dynamic public space is a continuous, 1.45-mile greenway, featuring more than 500 species of trees and plants, and is home to a number of public programs.

Although it has been in the works for years, the development of a new linear park is causing a great deal of excitement in Toronto. With construction set to begin in the spring, the Green Line is a five-kilometre, multi-use park system, located in midtown Toronto. It will run from Wiltshire Hydro Corridor to the Annex. Although the City of Toronto has operated many parks in this hydro corridor for several decades, the vision to make this space, consisting of 45 parcels of land, function as a connected series of open spaces within this corridor has been a long-standing goal.

“I think everyone will agree that we’ve seen our parks and green spaces used and appreciated like absolutely never before,” said Dave Harvey, executive director of Park People, the organization that developed the Green Line project. “It’s more commonly held now that parks are absolutely core urban infrastructure. It’s not a nice little amenity. It’s as essential as roads or water or sewers,” he said during the Future of Public Space webinar presented by Ryerson City Building Institute.

Once completed, the Green Line will provide much-needed park space for a number of the neighbourhoods it passes through and connects. Last year, the first confirmed park within the Green Line was announced. Located in the Davenport neighbourhood, construction of Macpherson Avenue Park is set to begin in the spring and will become the eastern entrance to the Green Line. The proposed design plans show a large number of seating options, exercise equipment, an abundance of shrubs and fruit trees and an amphitheatre.

There are 20 proposed projects for the Green Line, and according to the implementation plans, some may take upwards of 10 years to accomplish.

Once complete, the Green Line will include a doubling of parks in the corridor, bike paths and accessible walkways, public gardens, a dog park, seating areas, Indigenous placekeeping through art, interpretive signage and medicinal plants and opportunities for public art.

Although it won’t be complete until 2024, there’s another linear park set to join Toronto’s growing list of green spaces. The Meadoway is a 16-kilometre swatch of green on an old hydro corridor stretching from the Don Valley to Rouge Park.

The $38 million project will connect seven river and ravine systems, 15 parks, 13 neighbourhoods, 500 acres of meadow and more than 1,000 diverse species of flora and fauna. Renderings show multi-purpose trails for pedestrians and bicyclists and a pedestrian bridge that will provide access into the City of Toronto’s trail system.

“The Meadoway is a bold vision for an amazing part of our city,” said Mayor John Tory in a tweet. “People in every part of Toronto deserve places where they can walk, play and enjoy themselves.”

In the west end, over the last few years, Metrolinx has been busy working on a project called the Davenport Diamond Guideway and Greenway.

The Davenport Diamond is one of North America’s busiest rail intersections located just northwest of the Dupont Street and Lansdowne Avenue intersections. To help solve congestion problems, a guideway will be built over existing rail tracks, which will elevate the GO Train corridor between Bloor Street West in the south and Davenport Road in the north.

The new guideway will open up the ground for a new greenway.

“We wanted the design to reflect the community’s needs, while ensuring it follows a practical and sustainable framework that will create valuable spaces for future generations to enjoy,” said John Potter, Metrolinx manager, design division.

Although it’s still in the design stage, the Greenway will include fully accessible multi-use paths for pedestrians and cyclists, gathering spaces, pollinating gardens and a sustainable approach to landscape and plantings.

And finally, in uptown Toronto, built on the former Beltline railway, Toronto’s Beltline Trail is a nine-kilometre cycling and walking trail that was established in 1989.

Consisting of three sections — the York Beltline Trail (west of Allen Road), the Kay Gardner Beltline Park (from Allen to Mount Pleasant Road) and the Ravine Beltline Trail (south of Mount Pleasant Cemetery through the Moore Park Ravine). This magical trail has been a long-standing favourite, thanks to its number of parks, wooded areas and bridges.

The city has announced that the trail is getting an expansion between Marlee Avenue and Allen Road. With construction slated to start in the spring, a new trailhead will be added to the Marlee Avenue entrance, south of Roselawn Avenue.