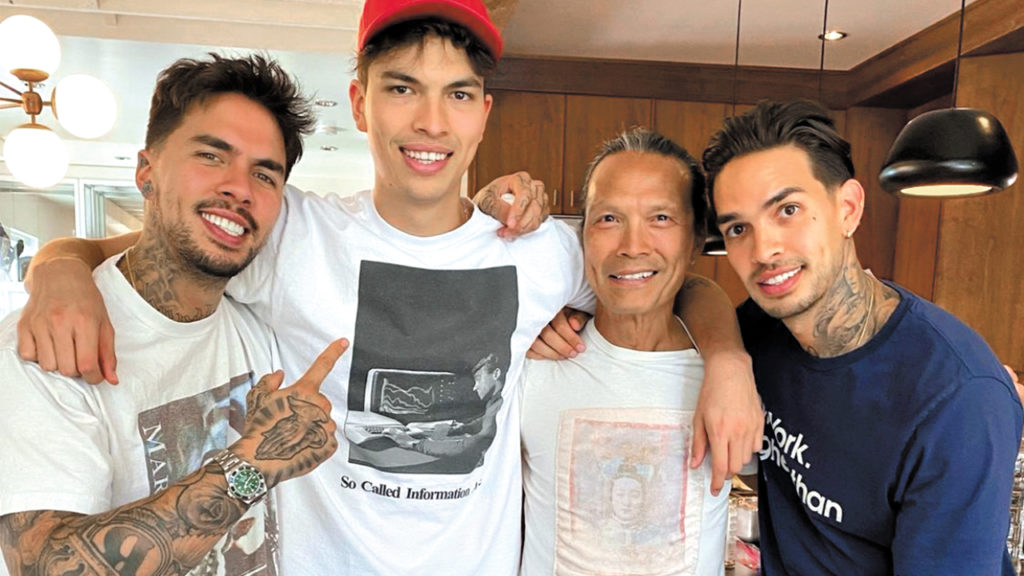 Chef Susur Lee is amongst the most acclaimed artists to ever don an apron in this country. Winner of nearly every accolade a chef can earn and the recipient of praise from every esteemed publication that writes about food — one of the first Torontonians to receive international raves for his eclectic, fusion cuisine — Lee, long hair flowing, is a fixture in magazines and on TV.

Lee was gracious enough to chat with Post City Magazines, where he’s been a longtime friend, about his recent celebrity turn on TikTok, the youth-centric social media app that’s seen him explode due to his hilarious, mind-blowing remixes of food from Taco Bell, Pizza Hut, Panda Express and Starbucks. His son, Jet Bent-Lee, however, was too busy for the interview.

“Jet went to better schools and uses bigger words than my other two boys, and he’s just very … unique,” says Lee with an admiring laugh, adding that his youngest son’s cool is part of the intergenerational appeal of the 2022 TikToking Susur Lee. “He doesn’t like to say too much and I admire that. Like, even with me, when he told me that the Panda Express video was one of my best, it touched my heart. To get praised by Jet is very cool.”

Lee has been cool since he opened Lotus, his first restaurant in Toronto, in 1987. To own and manage a restaurant group that’s been setting trends in each of the last five decades is an accomplishment that’s nearly unequalled, not just in Canada, but around the world. To speak to Chef — who laughs often and still works the line most nights at Lee, his flagship, upscale King Street restaurant, which aims to bring luxury back to our post-COVID city — is to feel inspired. He’s not exactly humble, but he’s hungry. Watch the TikTok videos he made with Jet, and you can see someone comfortable both in front of the camera and in his own skin. When, wearing socks, he turns a caramel frappuccino and a cake pop into a gourmet dessert, it’s a marvel of cooking — the reduced sauce, the spontaneous innovation, the exploratory lemon zest and surprise vanilla extract — and a charming glimpse into a warm family life.

“I don’t need an English lesson right now,” Chef tells Jet, who loves good-naturedly ribbing his famous dad. The videos work because Chef is brilliant, the concept is hilarious and Jet brings out his dad’s warmth. Susur Lee is not involved in the video’s editing and it wasn’t his idea. But to see him play around with his boy in the kitchen is so compelling that the Starbucks clip has been viewed more than 17 million times. Chef sounds dismayed and delighted by its surprise success.

“It’s serious, but funny, and Jet knows how to capture me just right,” says Susur Lee, who also appeared on a little show called Iron Chef, where he battled American celebrities like Bobby Flay. “I think Jet’s going to help bring in a new generation to Susur [restaurant], I told my staff: it’s time to start checking ID.”

One thing it’s definitely time for is a return to fine dining in Toronto and, with the warmer weather coming, Lee says that the city is hungry for indulgent fun. He says his focus this spring is on pampering his guests and making sure the room feels vibrant and cool.

“This season, it’s all about bringing Susur back to the old days — decadent, delicious, gourmet food.”

♬ Pope Is a Rockstar – Sales

Chef isn’t sure, beyond lowering the average age of his tables, how his popularity on TikTok might impact his business, but he readily admits that his latest dalliance with fame — alongside his celebrity son — is giving everyone an adrenaline jolt just at the exact moment the city is craving some buzz.

“I’m in a happy place and really just want to be creative and focus on the vibe of the city and making things great,” he says. “I want people to get excited and, if the TikToks help do that, I’m happy — cooking, like family, is my life.”