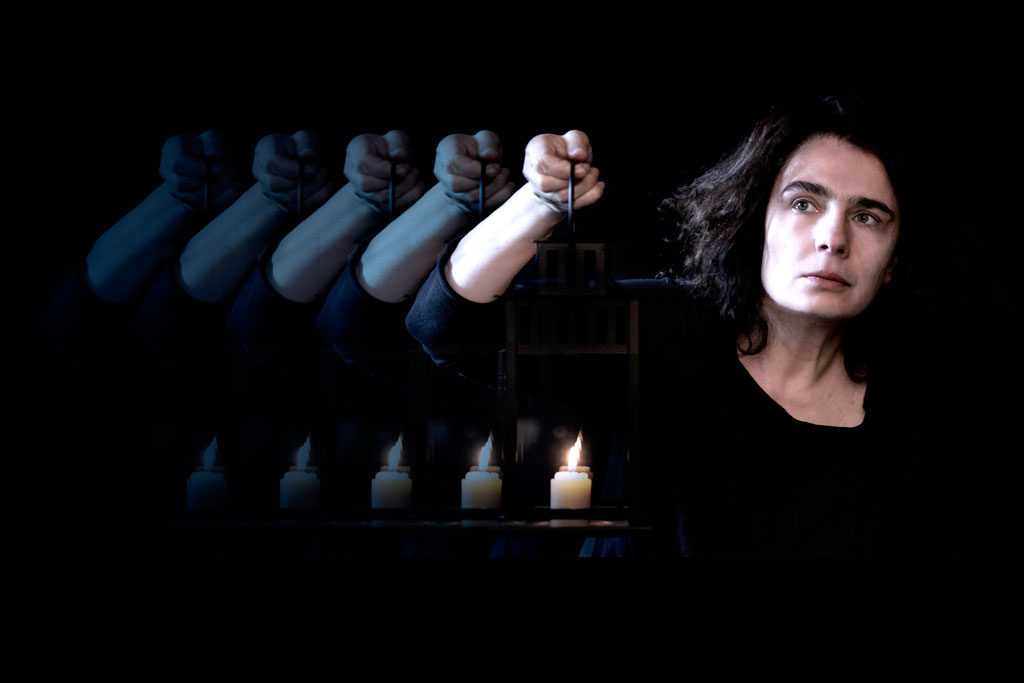 Armenian-Canadian actor Arsinée Khanjian is pensive as she considers her starring turn as Lyubov Andreyevna Ranevskaya in the timeless Anton Chekhov play, The Cherry Orchard.

“The play deals with time and space. The duration of life.… The contradiction that time is constantly moving yet has moments where we feel it’s not moving until we take action,” says Khanjian, before going on to praise  her collaborator, award-winning Iranian-Canadian director Soheil Parsa.

“It’s really an amazing project and adventure. I’m sure it’s going to be very special and different, with Soheil directing it and the choices of actors he has made,” Khanjian says.

Khanjian first came to Canada when she turned 17 and lived in Montreal, where she met her Canadian filmmaker husband Atom Egoyan. They moved to Toronto in 1984, where they lived around Spadina before eventually settling in Summerhill where they currently reside. The couple has a son, Arshile, now 25.

“Arshile is an amazing writer,” says the proud mom of the young screenwriter. “Perhaps he will do like his father and write and direct.”

Although Khanjian and her husband are perhaps best known for their work together, including the acclaimed films The Sweet Hereafter, Exotica and Ararat, Khanjian has been increasingly active in human rights issues in Armenia and around the world, while also working on her own projects in film and theatre, particularly in Europe.

She recently wrote, directed and performed a play called Auction of Souls staged in Berlin, which will return this April.

In Paris, she appeared in Code Inconnu with Juliette Binoche, and she also performed in a French-language stage production of Dancing at Lughnasa that ran in both Paris and Tokyo.

Though Khanjian was born in Beirut, Lebanon, she identifies as Armenian-Canadian because her parents and grandparents were Armenian. Her grandparents were survivors of the Armenian genocide, which she has been working to have recognized.

In 2016, she starred in a French film titled Lost in Armenia, a dramatic comedy which highlighted the relationship between Armenia and France.

As she contemplates her upcoming stage turn, Khanjian finds connections between Chekhov’s final play, penned in 1903, and the present day.

“The story is powerful because it is timeless and universal,” says Khanjian. “I think every generation has an invention or social and economic reality [that shifts our way of life].… When I look back 30 years, at film technology, and what has happened today to the film industry, it’s crazy how time has shifted that. The way the Internet has become part of our daily life. Cellphones are like extensions of our body.”

The Cherry Orchard follows an aristocratic Russian landowner (Khanjian’s character Lyubov) who returns to her family estate (backed by a cherry orchard) to pay the mortgage just before it is auctioned. The story explores the changing status of the Russian aristocracy at the turn of the 20th century, after the abolition of serfdom and the rise of a new middle class, along with the bourgeoisie’s attempt to find meaning in its newfound materialism.

Lyubov sells her beloved cherry orchard out of what she feels is necessity.

When she returns to the place of her childhood, Lyubov encounters a small provincial town that had stopped moving, in a way.

“Once she comes, suddenly the clock starts ticking and going incredibly fast. She becomes the trigger of that reality, of times changing. Every generation lives this, when things suddenly shift and bring change,” Khanjian says.

“Our time is really short on this planet. Toward the end of it, or middle age even, suddenly time starts moving so fast.… We are all in the midst of changes constantly,”

She points out that, in addition to change, there is also an environmental theme to this theatre classic.

“There’s also the idea that people get rid of nature in a pragmatic way, the notion of money being earned at the expense of this kind of loss. Look at the way we’re looking at nature these days, with companies that want to exploit nature, that don’t have regrets about ruining the environment. Even in Canada we have those issues,” she says.

At home in Toronto, one of Khanjian’s favourite places to spend time is in the Beaches neighbourhood, particularly at the R. C. Harris Water Treatment Plant.

“It’s a magical place. It’s like a palace. When Soheil offered me the part in The Cherry Orchard, I took a copy of the book and went there and did my first reading.” Khanjian recalls.

“I knew the play but hadn’t read it in a long time. I sat in front of the lake in front of this building, and when I would take breaks and look out, the landscape is gorgeous.”

Roncesvalles also holds a special place in her heart.

“There’s still a film theatre there, and I’ll have my popcorn with the huge screen in a half-empty theatre. Unfortunately they don’t get filled up nowadays. I love going to old theatres. Maybe it’s the Lyubov in me.”