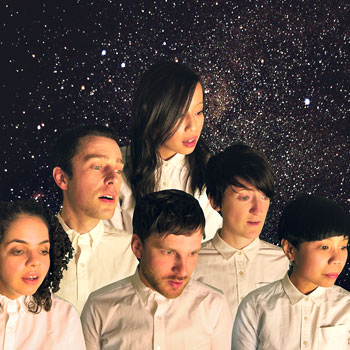 Toronto band Ohbijou is on the cusp. And front person, Casey Mejica, in explaining the preparation going into their soon-to-be-released third album, Metal Meets, seems to know it.

“I hope so,” says Mejica, of the band’s imminent breakthrough. “We’ve been around for a while, and we definitely put a really conscious and dedicated effort into it.”

Mejica and company are pulling out all the stops: including the addition of new musical layers and textures to their sparse and hypnotic music, expanding the songwriting duties to members not named Mejica and squirrelling themselves away in a small town on Georgian Bay for intensive writing sessions.

The impressive result sees the band ratchet up their carefully crafted sound while at the same time managing to cling to the emotionally engaging lyrics delivered by the wispy-voiced chanteuse, Mejica, that drove fans to Ohbijou thus far.

“It all happened pretty organically,” says Mejica, on the patio of the St. Lawrence Market in her newly adopted ’hood. “We really wanted to feel the growth of our songs.”

Helping in that development was producer Jace Lasek, of Montreal band the Besnard Lakes, whose technical wizardry, according to Mejica, helped “push the project as far as it could go.”

On Metal Meets, Mejica relinquishes some creative control as other band members step up and pen tunes for the album, and her sister sings lead.

“We wanted to do everything we could to breathe new life into the project and into our performances as well,” Mejica says. “And I am in no way possessive over writing,” she adds with a laugh.

Similar to past Ohbijou efforts is the exploration of love and the collision of emotions. Mejica says she’s always trying to find new and often unconventional ways to describe the age-old theme. “I think it is important to convey an honesty that an audience can relate to,” says Mejica, who was inspired after reading works by Anne Carson and Toronto writer Dionne Brand.

Mejica is also fuelled by politics, and one early morning while on hiatus in Berlin, she found herself glued to her computer monitor watching the all-night deputations session at Toronto’s City Hall.

“I said, ‘This is it, I’m not jumping ship,’ ” she explains. “That really fuelled my desire to stay committed to the arts community in Toronto.”

After taking the better part of a year off of touring, in July, Ohbijou played their first show in Ottawa. And they have a packed tour schedule this fall. Metal Meets is set for release Sept. 27. The band plays in Toronto at Trinity St. Paul’s United Church on Sept. 30. Go to www.ohbijou.com for further tour details.