In light of Toronto Star article, La Palette puts a moratorium on selling horsemeat - Streets Of Toronto
Skip to content 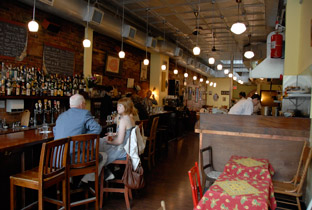 Last month, Rosedale’s Terroni Bar Centrale pulled horsemeat from its menu. The move — prompted solely by poor sales, apparently — wasn’t a complete surprise, since selling horsemeat is extra risqué for a chain restaurant. But what does it mean when, after over a decade, La Palette stops serving horsemeat, as it did over the weekend?

When La Palette opened its doors in 2000, it may have been the first place in Toronto to sell horsemeat. As far as co-owner Shamez Amlani knows, it could have been the first Canadian restaurant outside of Quebec to serve horse. And it did so enthusiastically.

“I want to be clear that we have no moral qualms about the eating and serving of horsemeat,” Amlani tells us.

And why should they, when they have no moral qualms about serving venison, duck or other animals? To be a non-vegetarian and protest the consumption of horsemeat is to partake in “speciesism,” Amlani says.

It’s no coincidence that La Palette put a moratorium on selling horsemeat on the same day that The Toronto Star published an in-depth investigation into horse consumption in Canada. That article points out several gruesome details about the horsemeat industry.

Most disturbing, for Amlani, is the fact that unwanted horses from the U.S. — where consumption of horsemeat has been banned since 2007 — are apparently making their way to Canada, including the Richelieu meat plant in Quebec, La Palette’s former horsemeat supplier.

Amlani was under the impression that Richelieu used only horses raised specifically for human consumption; that they were raised ethically and with adherence to health regulations. The problem with U.S. horses, experts say, is that they weren’t raised with human consumption in mind — they’re potentially contaminated with drugs like phenylbutazone (PBZ), an anti-inflammatory.

“It’s a health regulation violation,” a professor of neurology told The Star. “We’re sending contaminated horse meat to the people eating it.”

After reading The Star’s article, Amlani called Richelieu to do some first-hand research. He wasn’t confident with the responses he got — didn’t feel like they could guarantee properly-treated and uncontaminated product — so the moratorium went up. As soon as La Palette can source traceable, top-quality horsemeat, though, it’ll be back on the menu.

Still, the move is symbolically important. We’re curious to see whether other restaurants around the city will start bucking the trend.

In the meantime, La Palette is replacing its horsemeat dishes with venison.