Will the iceberg house trend continue in Toronto? - Streets Of Toronto
Skip to content 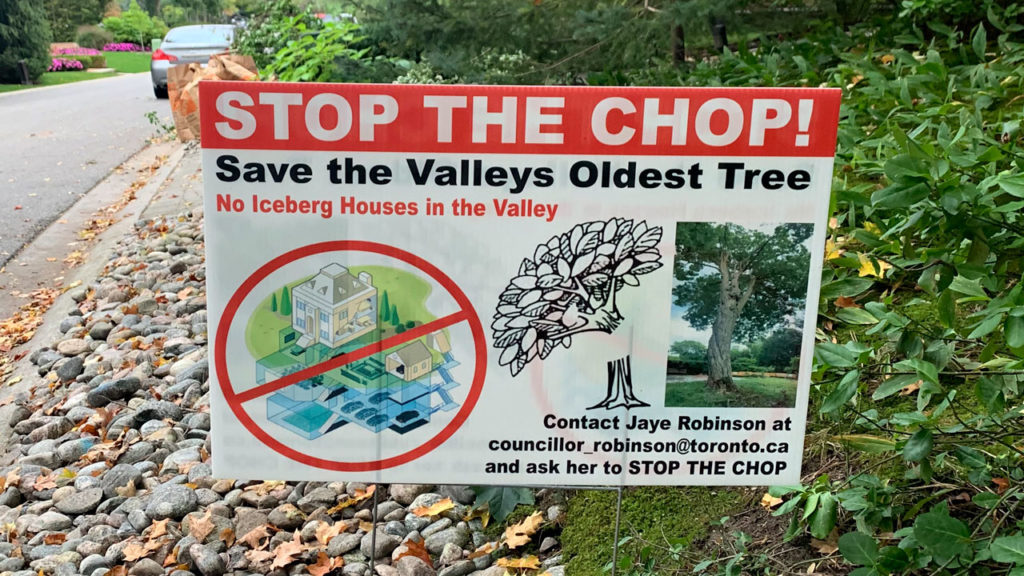 Hogg’s Hollow residents Shannon Rancourt and Laura Lamarche knew something strange was happening in their neighbourhood after a heritage home was demolished without a city permit during the May 24 long weekend.

“It really rattled us that things like that could easily happen,” Rancourt said.

Then one day in July, while they were both walking their dogs, they noticed some activity happening at 7 Knightswood Rd. — a home Rancourt said has been abandoned for about five years.

A massive 200-year-old sugar maple tree, which she said is likely the oldest tree in the heavily green neighbourhood, had been cordoned off on its way to being cut down.

Soon, Rancourt and Lamarche embarked on their own investigation that Rancourt describes as “peeling an onion.”

“The deeper we went with it, the worse it got,” Rancourt said.

They soon discovered that 7 Knightswood was set to be replaced by a house with a massive, two-storey basement that Rancourt describes as a “party palace,” complete with a basketball court, a karaoke bar, a stage with a golf simulator, three bedrooms, four bathrooms and a five-car garage.

The underground mausoleum-like space is even bigger than the above-ground plans for the house — a trend known as “iceberg houses,” houses with big, hidden basements that may be significantly larger than the house itself.

Although instances of these houses are beginning to pop up around Toronto, London, England, has already introduced laws to limit them given their potential to structurally disturb neighbouring houses.

This past summer, in London, UK, the Langtry House was put up for sale at $6.5US million. From the street, it appears to be a somewhat modest bungalow. But this Hampstead home, which zoning requires only be 11 feet above ground, is actually home to a 3,500 square foot subterranean paradise.

Stairs lead down to a central atrium area with 25-foot ceilings and an open concept living and dining room.

The basement of this particular iceberg also houses a sunken courtyard providing natural light, a gym and a cinema room.

In another notable case, iconic musician Jimmy Page of the band Led Zeppelin went to great lengths to oppose an iceberg home being proposed in his historic London neighbourhood by fellow musician Robbie Williams because he felt the massive two-level underground project complete with a swimming pool would negatively impact his own historic home.

London had moved to end the practice of constructing iceberg homes as the phenomenon among the city’s super-rich grew in popularity as a way to skirt around zoning bylaws.

Alongside the growth of iceberg homes grew concerns that the underground buildings could spell Titanic-level disaster by destabilizing the surrounding area.

Local councillor Jaye Robinson said there have been reports that iceberg houses can cause shifting foundations, collapsing ceilings and sagging floors.

That’s not to mention environmental concerns from such homes, including reduced soil permeability, storm water runoff and potential for erosion.

These concerns are even more pressing in environmentally sensitive areas like Hogg’s Hollow, which is in a flood plain and is especially prone to flooding given the Don River flows through it.

Resident Laura Lamarche explained, via email, that the committee of adjustment hearing pertaining to the Hoggs Hollow development was flawed and neighbours were not given proper notice to respond.

“Those that did receive the notice, had less than one week to mount a response,” wrote Lamarche.

“It was confirmed to us by the Committee of Adjustment that notice was sent out 20 days prior to the meeting and they blamed Canada Post for the delay. It seems odd that everyone who received the notice received it very late. Even with the late notice, four neighbours did write letters and attend the virtual hearing to put forth their concerns. With more time and greater awareness, a much larger neighbourhood response would have occurred.”

The information on the 7 Knightswood development is no longer available on the city of Toronto’s development applications website.

Nevertheless, the development at 7 Knightswood was still given the green light in late 2020 by the committee of adjustment — a group made up of citizen members that review applications for minor variances and consents — despite a recommendation by the City of Toronto’s Urban Forestry to refuse the application as it threatens the tree in its backyard.

“It’s a tragedy because the tree will be removed … and it’s simply because of this massive basement,” Robinson said. “We’re losing this iconic tree in Hogg’s Hollow.”

She said that this decision is the latest in a concerning trend from the committee to make questionable judgments and is pressing for it to be “thoroughly reviewed.”

Robinson will also be introducing a motion to Toronto City Council this fall to try to prevent iceberg houses from being built as there are currently no city bylaws to rein them in — they are a “blind spot,” she said.

In the meantime, city staff said there is no way to reverse the decision, according to Robinson.