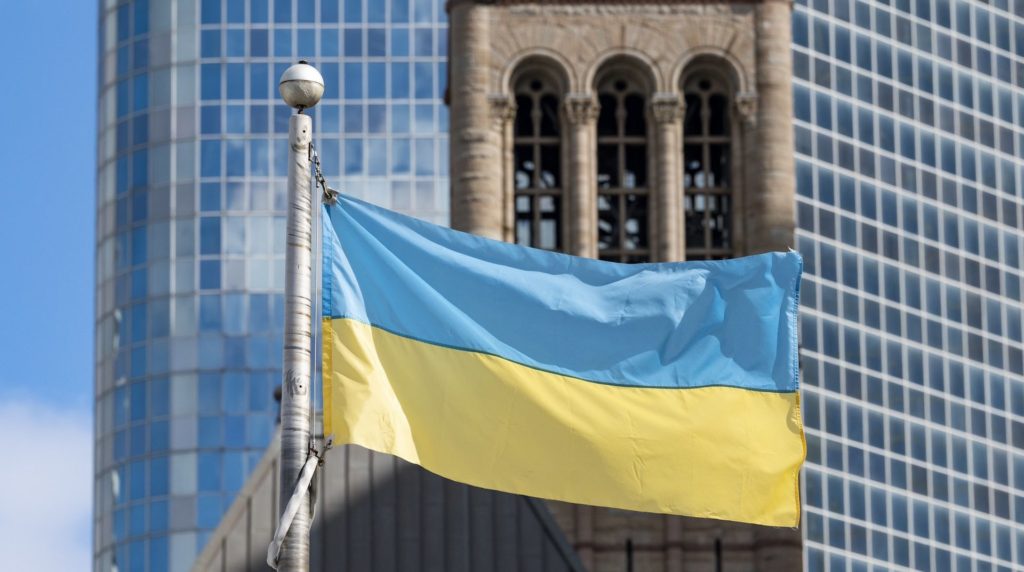 Several rallies in support of Ukraine are being held in Toronto this week, as the crisis with Russia continues to escalate. On Thursday, Russian President Vladimir Putin launched a military operation in Ukraine, by land, sea, and air, in what’s being considered the largest attack on a European state since the Second World War.

Ukrainian President Zelenskyy stated that Russia had carried out missile strikes on Ukrainian infrastructure and their border guards; explosions were reported across Kyiv and other cities.

Russia treacherously attacked our state in the morning, as Nazi Germany did in #2WW years. As of today, our countries are on different sides of world history. ?? has embarked on a path of evil, but ?? is defending itself & won’t give up its freedom no matter what Moscow thinks.

Toronto has one of the largest Ukrainian populations in Canada (122,510); residents and city leaders across the city have expressed their support of Ukraine.

“As shocking events unfold in Ukraine, I stand in solidarity and in sorrow with my friends in Toronto’s wonderful Ukrainian community and with the people of Ukraine,” Toronto Mayor John Tory tweeted.

As shocking events unfold in Ukraine, I stand in solidarity and in sorrow with my friends in Toronto’s wonderful Ukrainian community and with the people of Ukraine.

This week, hundreds have gathered outside the Ukrainian Consulate in Toronto—in the rain—to demonstrate their support for Ukraine. On Thursday afternoon, demonstrators held a rally outside the French Consulate at Yonge and Bloor, and a “Stand Against Putin’s Aggression Towards Ukraine” protest will be held Thursday evening at 5 p.m. at Nathan Phillips Square.

??Thank you to everyone who came out to support Ukraine today???? ! ?It was an amazing turn out ! ?Rain and bad traffic could not stop Ukrainians !❤Thank you to @Yvan_Baker, @j_maloney , @TedOpitz , @kolga for your support ! #StandWithUkraine #SanctionRussia pic.twitter.com/hLguJHsI24

Putin has previously accused the U.S. and its allies of ignoring Russia’s demands to prevent Ukraine from ever joining NATO. In a press address before the explosions, Putin urged Ukrainian servicemen to put down their arms and go home; he said that Russia did not intend to occupy Ukraine but to “demilitarize” it.

Western nations, Australia, and Japan announced sanctions on Russia in response to the military operations.

Prime Minister Justin Trudeau announced on Thursday that Canada will target 62 individuals/entities, including members of the Russian elite and their family members, the Wagner Group (a Russian paramilitary organization), and major Russian banks. Canada will also sanction members of the Russian Security Council, will cancel existing export permits for Russia, and will no longer issue new export permits for Russia.

Russia’s attacks on Ukraine are unwarranted, unprovoked, and unacceptable – and they will be met with severe consequences. For more on Canada’s response, tune in to my update with @CAFreeland, @AnitaAnandMP, and @MelanieJoly: https://t.co/m9s9tX7ltQ

“We stand united and steadfast in our support of Ukraine’s sovereignty. And we stand in solidarity with the Ukrainian people’s right to decide their own future in a free and democratic state,” Trudeau said at a press conference on Thursday.