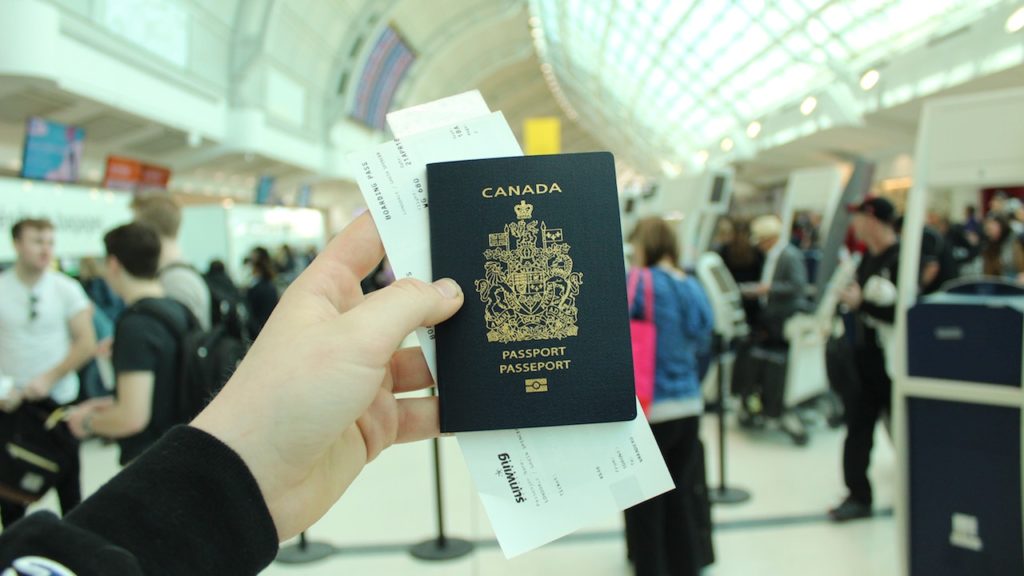 Renewing or applying for a Canadian passport has become the city’s latest bloodsport, and for good reason.There is a run on passports, everyone wants to travel, demand has far exceeded the projections of Service Canada and the offices are swamped and floundering. For those who need to travel within the next 45 days, an in-person visit to a Service Canada office with passport services is the only option. And it ain’t easy. After a week that included five separate visits to Toronto and area passport offices, tracking down the elusive passport wicket clerk, an application was finally filed. Here’s what I learned.

1. The first time visiting a passport office was over the lunch hour at the Victoria Street location in downtown Toronto. It was there that the reality of the situation was thrust firmly into my cranium. A line snaked down the block, arriving at the corner of Richmond Street. Securing a place at the back of the line, I casually walked up to the front to assess the situation, greeted with glares from those who had clearly been waiting in the hot sun too long and weren’t in the mood for any line cutters. The people at the front had been waiting since 9 a.m. And it was time to regroup and execute a new plan, which began with an attempt to book an appointment at Canada.ca. Hahaha, what was I thinking? Next.

Lesson: Victoria Street gets a crazy amount of midday sun – if this is the only place you can get to, be sure to wear sun protection, and bring a wide-brimmed hat along with water.

2. The second visit was to the Scarborough passport office, which is located beside the Scarborough Town Centre mall. So, lots of free parking available. We arrived at around 2:30 in the afternoon and were greeted with a line of maybe 15-20 people. Although optimistic, after asking a few questions in the line and inside with the security guard, it was determined that the office was already over capacity for the day, and was since 10 a.m. Those outside were waiting in what was dubbed the “hopeful line,” meaning they were waiting around just in case there was space at the end of the day. On this day, there was and a few people bounded happily in at the last minute, including yours truly. Sadly, there was an ID issue and the visit was for naught.

Lesson: Be sure to have double and triple-checked everything. You do not want to do this twice. In this instance, a child’s health card had expired over the pandemic when they didn’t need to be renewed right away. The child’s health card doesn’t have a photo so when upgrading to adult passport at age 16, even with a parent there, a photo and card renewal is essential. Photo ID with address is the only way you’re getting an application filed.

3. On the third visit, it was a return trip to Scarborough, this time in the morning. The Scarborough office has a nice area to wait outside that has a glass roof structure to protect from the elements and diffuse the sun. Upon arrival at 7:45 a.m., almost an hour before the office opened, I was greeted by a lineup that snaked hither and yon like there was a Phoebe Bridgers concert about to begin, easily 200 to 300 people. Those at the front of the line looked comfortable if haggard with field chairs, snacks and plenty of devices. Book in hand, and headphones at the ready I stood at the back of the line. Two hours later, at about 9:30 a.m., and just 50 people from the front, the office was already at capacity and everyone was asked to leave. The security guard mentioned in no uncertain terms that people are beginning to line up as early as 3:30 or 4 a.m. Egad.

Lesson: If you think 8 a.m. is early enough, you’re kidding yourself. Plus, bring a chair! Plus, the posted wait times are not accurate. On the first visit to Scarborough the posted wait time was two hours, and that was four hours after the line was officially closed.

4. On the fourth visit, I left the crowded confines of the 416 for the Whitby Mall, another passport office 45 minutes east of Toronto. This was more of an exploratory trip as I was driving by on other business and thought to check in at the end of the day in case there was another “hopeful line” at this location. There was not. But, the last person in line said they’d called “capacity” at 10 a.m. So he had been in line for 5.5 hours at that point.

Lesson: No matter when you go, if you’re getting in, you’re going to wait four to six hours to do so.

5. At that point, if a successful passport application was in the cards, it had to be this day. Anything more was just too much to handle. So, I bit the bullet, as they say, and drove east to Whitby Mall at 4 a.m. Yes, that’s four o’clock in the morning. Turns out, at Whitby Mall, 4 a.m. is actually a bit too early. I was first in line and by the time the doors to the mall were opened at 5:30 a.m. there were just five people. Remember, if heading to Whitby Mall at this time, the doors to the Service Canada office at the middle doors at the back of the mall. Lots of free parking. For this trip, I had a comfortable camp chair, headphones, water, and an iPad loaded with Stranger Things episodes. I hunkered down in relative bliss at the front of the line. I say relative as I was already shell-shocked from four previous visits and could not deal with another application mistake. At 8:30, the doors opened, I was asked to show travel documents stating that I had booked travel for the coming weeks and was ushered in to the attendant, who took my application and gave me a receipt to pick it up two weeks later. It was finally over.

Lesson: If driving, Whitby Mall is a good office to try with a lot of wickets and an indoor waiting area. It started filling up at 6:30 a.m. and by the time the office opened at 8:30 a.m. there were easily 200 people in the mall if not more, and staff were already set to cut off the line part way through. If the thought of picking up a passport at the office fills you with dread, it is important to note it is a separate and much-less-chaotic line-up and retrieval process.

There is no easy way to do this.