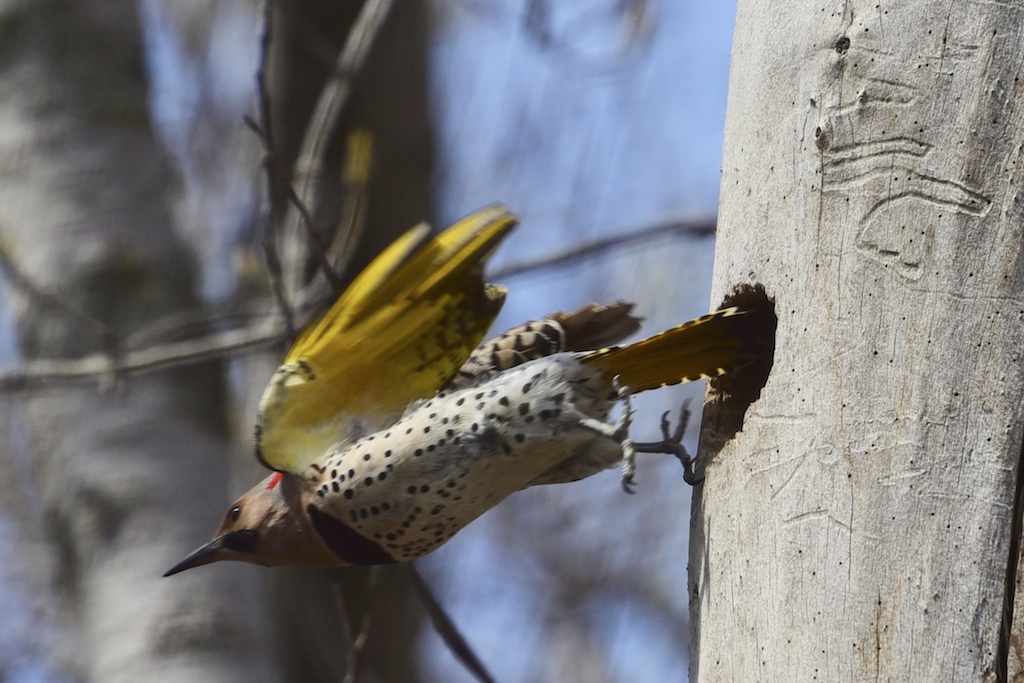 When looking for nature and wildlife, we often think we need to plan day trips and long hikes through provincial parks and conservation areas. But, while stuck at home over the past year and a half, a lot of people have been discovering all the incredible wildlife available to them right here in the city. This has led to a newfound hobby for a lot of Torontonians: birdwatching.

As a bird researcher and lifelong bird lover, Emily Rondel has noticed this increased public interest in the hobby.

“While people were at home, they started realizing ‘oh, there are wild creatures around where I live.’ That’s pretty exciting for a lot of people because it wasn’t part of their mentality about their neighbourhood [beforehand],” she says.

Though she has worked professionally at Birds Canada in the past, Rondel now labels herself as “mostly a hobbyist birder.” She is currently the President of the Toronto Ornithological Club.

Emily Rondel was kind enough to sit down with us and give us some insight into how to make the most of birdwatching right here in Toronto.

“The thing that’s great about it is there’s a lot of different ways of doing it. So, unlike certain hobbies where there’s kind of a right way to proceed and a wrong way to proceed, you convert in whatever way you’re comfortable with.”

Binoculars may seem like an obvious piece of equipment, but plenty of birdwatchers prefer to go without. Unfortunately, a good quality pair, which makes birdwatching much easier, can get rather pricey. Rondel recommends Celestron as a brand that makes quality, serviceable products relatively inexpensively.

But not every set of binoculars is good for birding specifically. The ones used to see across the land on a safari in Africa will be different from the ones you use to see a small bird on a branch right in front of you.

“People often think the more powerful, the better, but not really. You need a certain sweet spot of magnification,” says Rondel, explaining that for birding, the sweet spot is eight to ten magnification. Anything outside that range will either not magnify enough or will magnify too much, making it difficult to focus.

In recent years, young people have found that birdwatching with a camera is an easy and fun way to bird. “They take photos of things, go home and figure out what they saw through looking at the photographs they took,” says Rondel. It takes the pressure off identifying the bird while it’s in front of you.

Another way birding has advanced in recent years is through popular phone apps like Ebird. Ebird is a database of bird sightings from across the world. As a beginner, you can search your area to see the various species that have been spotted there.

Another app that might be more useful for beginner birders, Rondel says, is Merlin Bird ID. It asks three questions about the size of the bird, its main colours and its behaviour. Then, using the Ebird database and based on the location and time of year, the app provides a list of possible matches. “It actually helps hone your observational skills,” Rondel says. “It’s very simple. I often have kids use it, and it’s great for families.”

On the more traditional, old-school side of things, field guides are an excellent way of identifying the birds you see in your yard. Rondel was learning to birdwatch before apps were so accessible, and she learned a lot about bird families and groups from field guides.

Rondel’s favourites are the Peterson Field Guide Series and the Sibley Field Guide. These are both updated regularly and use images and descriptions for simple identification.

“I would recommend to just go to a store or bookshop where you can see how they’re all laid out and find [a field guide] that works for you because they all have their advantages and disadvantages.”

Rondel’s favourite way to bird is by ear.

Rondel’s tip to birding by ear is to learn five or ten bird songs that are common in your area. If you’re in Toronto, start by learning what a cardinal, American robin, chimney swift and a house finch or golden finch all sound like. These birds are always flying around the city and yet you probably don’t realize how much you hear them.

Once you learn these, Rondel says, you’re identifying who they are.

“And then if you hear something a little bit different, you can go find it,” she adds. “And so, rather than trying to learn all of the birdsong—which is honestly the endeavour of a lifetime—learn five and then you’ll really be on your way. And you’ll be surprised by how quickly the next five come.”

Where to go birdwatching in Toronto

The best locations for birdwatching really depend on what you’re looking for and the time of year. This time of year, birds “are doing very interesting things,” Rondel says.

Toronto’s many lakefront parks are an excellent location to see stunning waterfowl. Head to Tommy Thompson Park to see a double-crested cormorant drying its wings in the sun, or to the marina at Colonel Samuel Smith Park to see red-necked grebes diving for fish.

While these are two common spots for beginners, there are also lots of “hidden gems” for birding, Rondel says. “There are so many places to go that aren’t ‘birding locations’ or on the beaten path of where birders go. But they’re just as good.” The list includes any ravines or local cemeteries.

The exciting part about birding is that you never know what you might see. The last few summers, it was huge news that the endangered piping plover had been nesting on the Toronto Islands beaches for the first time in over 80 years. There have been no sightings on the beaches yet this year, but who knows what else you might find?

Possibly the best way to begin birdwatching is to attract birds to your own backyard.

For binoculars, field guides and everything to get you set up for a day spent following bird calls, Urban Nature Store has locations all across the GTA.

And of course, The Toronto Ornithological Club hosts walks, programs, and lectures that are perfect for both birdwatching enthusiasts and those just starting out.