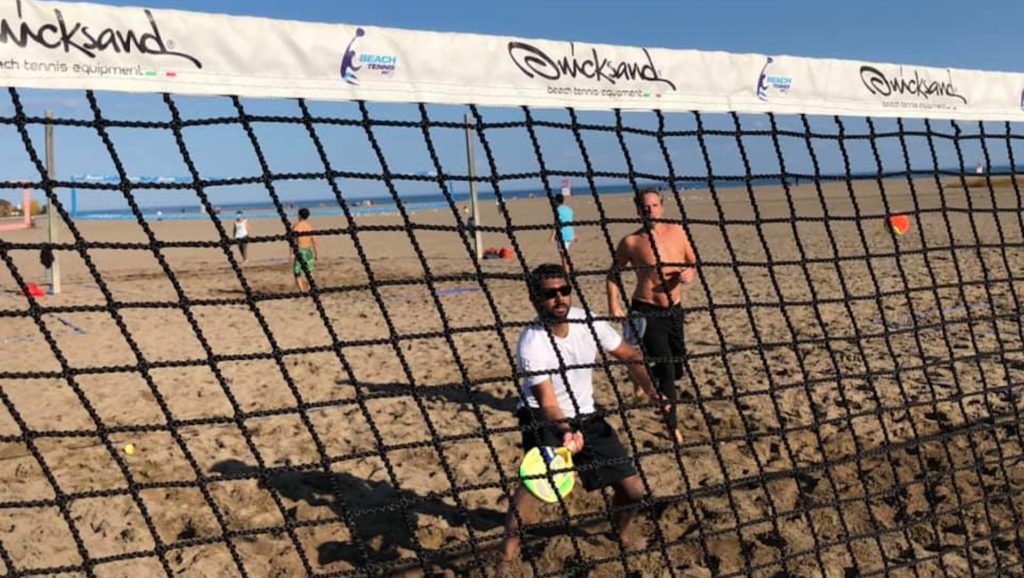 This weekend, Toronto will be hosting its first national open beach tennis tournament on the sands of Woodbine Beach, Sept. 24-26. The hope is that the hometown Toronto Beach Tennis Club will generate even more interest in this exciting new (to Toronto) sport.

One of the club founders, Noah Goldstein, first started playing regularly in Toronto a few years back after one of his friends from another paddle sport, ping pong, witnessed beach tennis while on vacation in Aruba.

“We started a local not-for-profit sports club in mid-2019 and began growing the sport through our connections and a meetup group,” Goldstein says. “Beach tennis was a great refuge for team sports athletes last summer during COVID times since it’s a naturally distanced non-contact sport.”

Over the past year, the club has more than doubled its membership.

“The biggest thing is the beach atmosphere and how it’s the only racquet sport where you can dive without pain,” Goldstein says. “Diving to retrieve an almost out-of-reach shot brings that joy of a great play that just doesn’t come as often in most sports.”

Beach tennis has similarities with several other sports including volleyball, tennis, and ping pong. It’s played with a paddle racquet and an oversized tennis ball. Like volleyball, the ball cannot touch the ground. The idea is to return the shot over a net and into the opposing player(s) court in one shot. The net is 5,7” in height. The scoring system is the same as tennis.

“The biggest difference with other racquet sports is that you need to place the ball with touch more often than hitting with power,” Goldstein explains. “Instead of swinging, it is ideal to get the ball early and punch it to a spot away from your opponents. This is more easily understood if you come out and try it! One of the great attractions to beach tennis is that you can learn enough basics in a couple of minutes to have a very fun game.”

Those with racquet experience, whether tennis, squash, or even ping pong, but other sports might offer some useful and transferable skills as well.

“Being comfortable swinging a racquet helps get to high levels, but the technique is somewhat unique and some of our best players in Toronto have a background in ultimate frisbee rather than racquet sports,” Goldstein explains. “Their experience in efficient movement and ability to problem solve at a high sports level is very helpful. Having said that, tennis, badminton, and squash backgrounds have shown to be very transferable skills at a high level.”

According to Goldstein, beach tennis is huge on the beaches of Italy where it was invented and has very large communities in Brazil, Spain, Aruba, and many other beaches around the world. In North America, the sport is the biggest in California and Florida as you may expect, but also has clubs in Montreal, Vancouver, Buffalo, and Baltimore.

In addition to the weekend tournament, the club hosts regular opportunities to play at Woodbine Beach, where there is plenty of room amidst the hundred or so beach volleyball courts, which are also suitable for beach tennis, as well as indoors during the winter. Those interested are free to come out and try beach tennis with the club’s equipment before signing on to become members and investing in gear.

This weekend is a first for the club and is a step towards larger goals in the future including national beach tennis rankings and a cross-country tour.

“Our first National Open tournament is focussing on building a fun atmosphere, building the community, and creating awareness of the sport so others can find it and fall in love with it as we have,” Goldstein adds.

To get involved head to the Toronto Beach Tennis Club Facebook page, or come down to Woodbine Beach on the weekend to check it out.