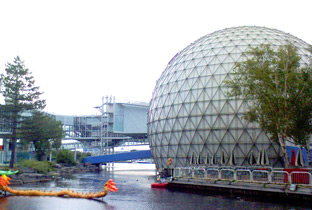 Ontario Place is getting a revamp. According to the Globe, most of the park will be closed until 2017 as a panel led by John Tory (yes, that John Tory) tries to figure out how to make it a profitable, must-visit destination. While turning this quintessentially boring “amusement park” into something mind-blowing is no small order, we think it can be done with a bit of imagination. Below, our suggestions for making Ontario Place amazing.