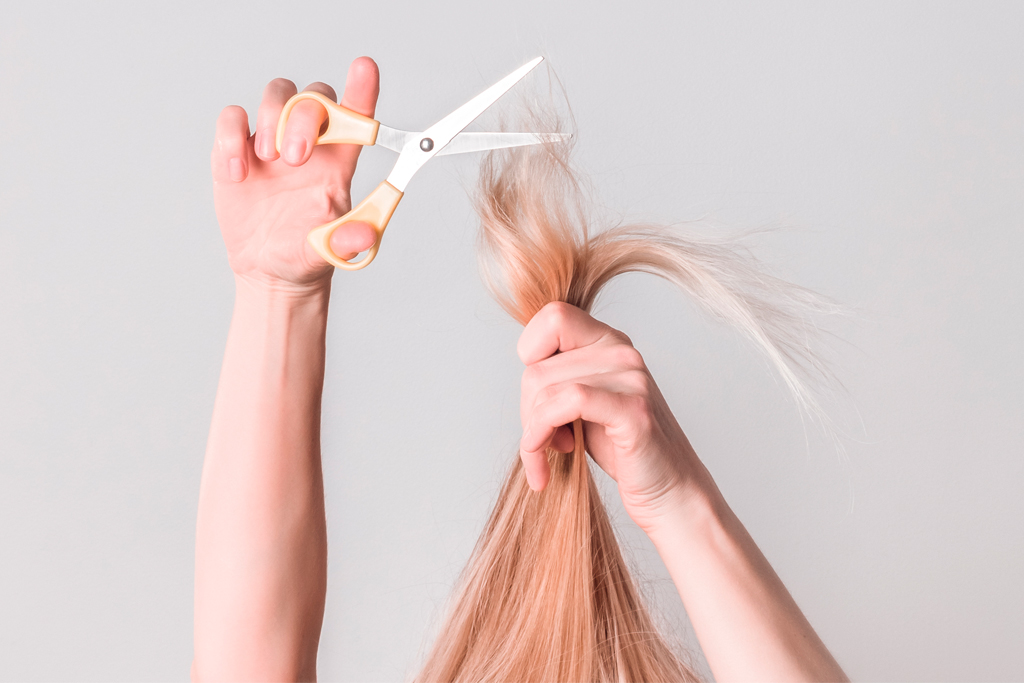 It’s being done everywhere — on YouTube, on your kid’s TikTok feed, and in any rom-com where the protagonist has an identity crisis and/or introspective epiphany. It’s the at-home haircut. While many stylists don’t recommend giving yourself a haircut at home, the COVID-19 pandemic has made it the only option during isolation. Here are some tips and tricks from local experts for those of you who desperately need to tame those locks.

In response to the rise in demand for at-home hair care, stylists from salons across the city have been connecting with their clients via social media to help maintain their cut and colour. One such salon is Harbord Street’s Palm Sunday. The salon specializes in colouring services, and has created its own self-colouring kit called Tone at Home. For every kit sold, Palm Sunday will make a $10 donation to The Stop Community Food Centre.

“We virtually consult with guests to determine their custom colour and vet if they are the right fit for this type of service,” says Palm Sunday co-owner Ronnie Dag of the Tone at Home process. Dag recommends that anyone looking to colour their hair at home should reach out to their stylist beforehand. Factors such as pre-existing colour, the ratio of roots to ends and the level of grey in your hair all help determine whether or not colouring at home will be effective. “We don’t advise home bleaching, that could be disastrous,” says Dag.

For those with long hair seeking a trim, Ernesto Domanico, owner and president of Salon Solis on Yonge Street, says curling and styling are safer options than self-trimming. However, for people who are adamant on pulling out the scissors, Domanico recommends the ponytail method.

This method works best when you are isolating with someone else because you’ll likely need a second pair of hands. The ponytail method is much like it sounds — comb your hair back, put it into a ponytail and place an elastic at your desired length. Then, while holding the hair tightly, cut either above or below the elastic at the length you prefer.

“If you do it yourself,” Domanico says, “start with small increments in case you make a mistake. Part your hair in the middle and ponytail both sides at the desired length as far down [on your head] as you can get them. Cut those two little ponytails but first use the mirror to match up the elastic length so that you get an even job.”

For layers, he says to put your ponytail all the way at the very top of your head, placing the elastic at the desired length, and cutting. “Your head is round, there are pivot points, and if you ponytail right at the top and cut it, you’ll get a layered haircut,” he says. The same applies for people with curly hair, “just make sure you brush it out,” says Domanico.

The ponytail method will also work for bangs. “You can do the same thing with bangs too, ponytail everything, and it’s still very easy to fix when this pandemic is over and you get a proper haircut.”

Dag from Palm Sunday says that bangs are the easiest hairstyle to maintain at home, but she stressed the importance of trimming the proper sections at the proper angles and connecting with a stylist before you do so.

For those with short hair, buzzing your whole head could be a temporary fix while you wait out the COVID-19 pandemic. When salons reopen, your stylist will have a fresh canvas to work with and can bring your hair back to its former glory. But for those who are not so keen on that option, Mustafa Ghassan, barber and founder of Rondez-Vous, has some tips for maintaining a fade at home.

“The first step that you should always do before you start, is to comb and style your hair the way you want it at the end of the haircut,” he says, explaining that this method will make the entire process easier because your hair is already in your preferred style.

Ghassan also stresses the importance of starting with the longer hair at the top, rather than the shorter hair at the bottom. “Start with the longest level, then go downwards one number at a time,”  he says. For a number one fade, Ghassan says to start with a number four. Then go down to three, then two and stop at one. The same goes for a number two fade. Start at four, then three and stop at two.

“Don’t start with one,” Ghassan says, “because you’re going to make a line and it’s going to be very hard to blend in and fade.” He also says not to do a zero fade at all when at home because it is the most difficult and requires the most steps.

When it comes to sideburns, he says to do them at your own discretion but that they are usually done on the shorter side.

For those with curly or nappy hair, the process is the same, but Ghassan says that when it comes to numbers one and two, you should always go with the grain of the hair. “If you go against the grain, it’ll be too short and you’ll create a line that’s hard to fade,” he says.

For short haircuts that aren’t fades, Domanico warns against attempting that at-home haircut at all. “Because you’re working with measurements, you could give yourself a botch-job,” he says. Domanico recommends styling the hair with gel instead of picking up a pair of scissors.

For those who want to try this haircut at home, Ghassan recommends starting in the middle of the head, and cutting a uniform length all the way out to the side, then going back to the middle and repeating the task for all sections of hair.