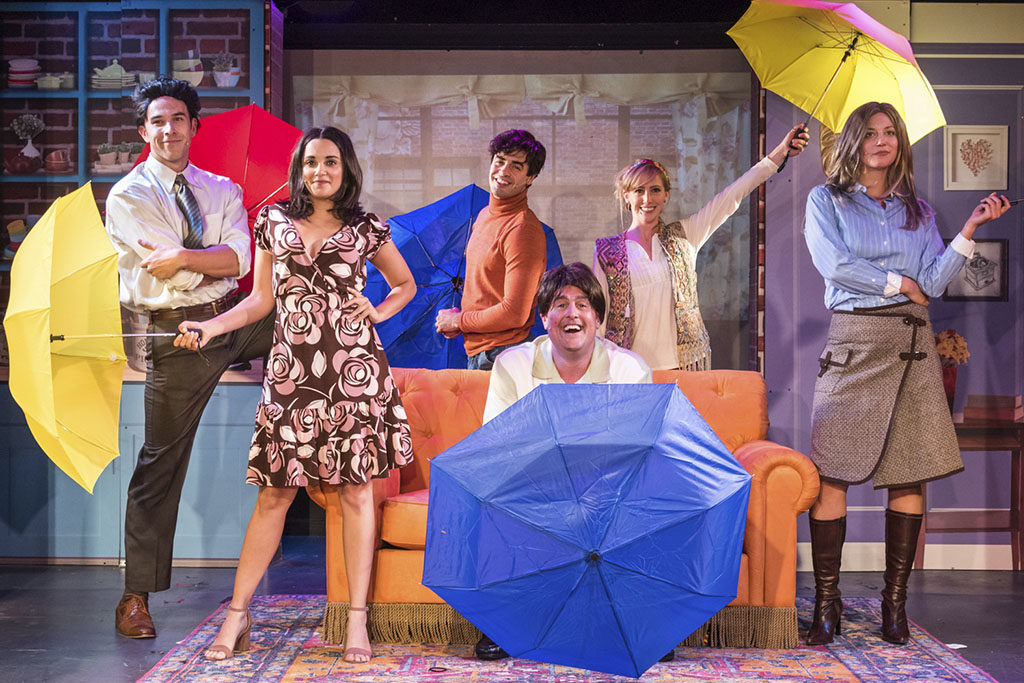 THE ONE ABOUT THE THEATRE

We love our pop culture. And what might even be a smidge better is making fun of our pop culture obsession. Case in point, Friends! The Musical Parody, which runs at the CAA Theatre Nov. 1 to 25.

The New York City company that created the show is well versed in pop culture parody, having already knocked off send-ups of well-known sitcoms including Full House and Beverly Hills 90210. So why not tackle one of the sitcom world’s most revered shows?

“After five parody musicals about TV shows, we’re finally ready to pivot to one of the most popular TV shows ever,” says Bob McSmith, of the show writing team Bob and Tobly McSmith. “There’s plenty to celebrate and poke fun at on such an iconic TV show loved by millions all over the world. No pressure.”

Friends (as you may know) is a long-running American TV sitcom, created by David Crane and Marta Kauffman, which aired on NBC from 1994 to 2004.

The show chronicles a sextet of New York City twentysomethings — Monica, Rachel, Phoebe, Ross, Chandler and Joey — as they navigate the new world of adulting, pet monkeys, singing about smelly cats and more.

For a certain generation, the show brought new meaning to phrases such as “We were on a break!” “She’s your lobster” and “How you doin’?”

“It’s catnip for fans of Friends but also enjoyable to people who’ve never seen an episode in their lives (if those people exist).”

The parody musical is a highlight reel of moments all smooshed into one happy evening of whimsical entertainment.

“Friends! The Musical Parody is a loving lampoon of the TV show,” Bob says. “It’s catnip for fans of Friends but also enjoyable to people who’ve never seen an episode in their lives (if those people exist).”

Of course, picking and choosing episodes had its challenges.

“We approach each parody differently depending on what’s important to us about the source material,” he says.

“For Friends, we felt that it would be a disservice to not cram in all nine seasons of storylines and have some fun moments with fan favourites like Janice, Gunther, Marcel the Monkey and other surprises.”

Rumour has it even Fat Monica makes an appearance.

So what can patrons expect from an evening of Friends send-ups?

“You can expect to have a great night out with all your ‘friends,’ Bob says.

“The show has got a lot of laughs and a lot of heart. We want everyone who sees the show to laugh, reminisce and return to a simpler time when it wasn’t out of the ordinary to spend all day every day with a small group of people sitting on the same couch in the same coffee shop.”

For ticket information, go to Mirvish.com.

And just so you can really get your nineties fix, here are two additional hangouts to add to your day with the Friends gang.

THE ONE ABOUT THE COFFEE SHOP

Although a long time in the making, a Friends-themed coffee shop named Central Café, modelled after the Central Perk café in the TV series, has opened in downtown Toronto at 52 Bathurst St.

What better way to get in the mood for a little bit of Chandler and his misplaced “wenus” than a big cuppa on a replica Friends couch and coffee table.

THE ONE ABOUT THE BAR

We all know that Toronto has a thing for trivia. On any given night, in watering holes across the city, people of the smarty-pants persuasion gather to sip libations and answer questions on topics ranging from punk rock to Party of Five. So it is no surprise than one of the most iconic TV comedies of all-time is also included in the fun.

Ready to test your knowledge? Throw your hat into the ring at a trivia challenge at Yorkville’s favourite pub, Hemingway’s.

On five nights in November, the Kiwi-loving tavern hosts Friends 4.0 Trivia. There is an $8.50 entry, and 25 per cent of ticket sales goes to charity.

Go to Hemingways.to for details.