How They Met: The Social's Jess Allen on finding love over old movies
Skip to content 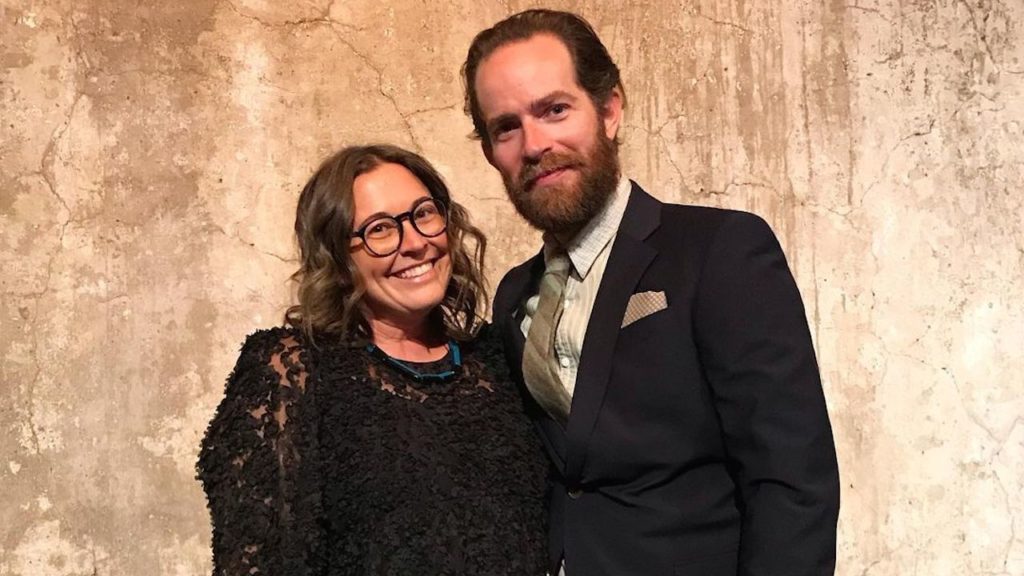 When Jess Allen joined The Social in its first year as a correspondent, she quickly garnered her own fan base. Viewers were excited when they turned on the TV to see her join the other hosts with her quick wit and commentary. Ahead of the 10th season of The Social, which premiered on Sept. 6, we asked Allen to share the details of how she met her longtime partner Simon Gadke.

I was working at Terroni on Queen, in the midst of a huge crush on a dishwasher who was eight years my junior and who was not Simon. I was feeling a little lost. OK, more than a little lost. Then one day this dishwasher’s friend showed up on the patio. He seemed mature.

“That’s nice,” I thought, “Here’s a guy who is older, also friends with the dishwasher but doesn’t seem that lost.” I was wrong about two things: Simon was eight years my junior and he was also a little lost.

We went for dinner at the old Swan restaurant on Queen Street. He ordered swordfish. I ordered beef short ribs. After, we ended up at the Vespa diner for a slice of cherry pie and coffee. Then I drove him home to his parent’s place. Why? Because he still lived with his parents.

Our courtship took place over many months. We took tap dancing lessons, we played pool, we watched Marx Brothers movies and ’30s screwball comedies. Late one night, during a snowstorm, I drove over to his parents’ house, probably because he’d just picked up a copy of Horsefeathers from the library. Afterwards, we talked through the finer points of Chico, Harpo, and Groucho (Zeppo never came up). The tension was there when I was ready to head home to my little apartment. So, I very slowly put on my boots. My bulky, unwilling parka. My hat. My gloves. My scarf. Then I asked him if he thought it was absurd that I really liked him. He said no, and then he kissed me.

Realizing he’s “the one”

I can’t think of a specific moment, maybe because it often feels like our entire relationship has been a series of moments confirming that he’s it for me. Every time he makes me laugh, every time he and my mom talk about their shared love of Shelley teacups and old plate patterns and even the time I had a tank top on and he compared me to Linda Hamilton from Terminator 2…if Linda Hamilton had a sister who’d, you know, “lived a little.”


There’s an old saying: the couple that Merchant-Ivorys together, stays together, and we’ve found this to be true. It’s also true of Real Housewiving, Below Decking and Drag Racing together. Our shared interests really run the gamut of high-low: from Coors Light to Barolo, from public pools to sailing on the Mediterranean, which, OK, we’ve only done once, but we hope one day it becomes a hobby.

We’re both good at being ridiculous and seeing our ridiculousness, so dinner talk is never dull. We also both share the same taste for extremely dry, crisp and minerally white wines. In short, it’s humour and white wine. In a little bit longer, it’s being comfortable with not necessarily having the answers to all the questions this life presents to us.


We joke that we will end up like two old Victorian ladies surrounded by their kitschy treasures, sitting in their overgrown garden wearing their moth-eaten-but-still-fabulous robes. But my true dream is that one day we can live part-time on the island of Crete in a stone house, close to the blue water for swims, sipping on crisp cold white wine, writing at our desks, hosting our friends who make the journey to stay with us and still being just a little lost. And still very much in love.

For the story of how The Social’s Lainey Lui met her husband, click here.

For the story of how The Social’s Cynthia Loyst met her husband, click here.