How They Met: Diana Bentley and Ted Dykstra on a love story all their own - Streets Of Toronto
Skip to content 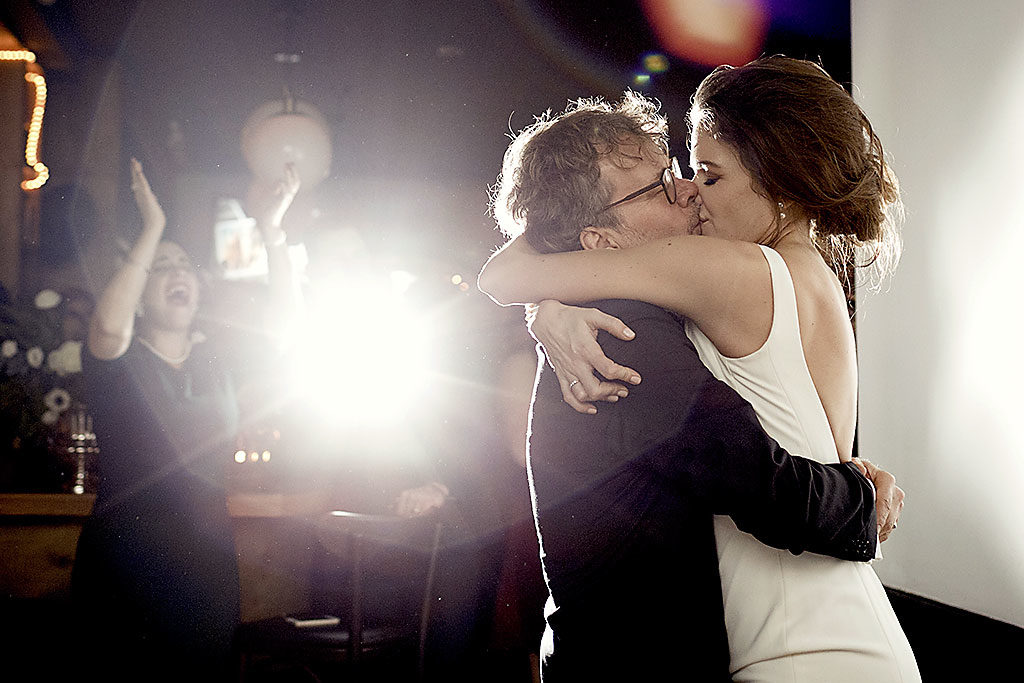 Diana Bentley and Ted Dykstra are the duo behind the Coal Mine Theatre. This month, Bentley will be producing The Wonder Pageant, an improv holiday show from Dec. 2 to 23, while Dykstra is directing The Father, a play about the realities of living with Alzheimer’s. The pair met at the theatre, of course. Dykstra was directing a show that had just opened, and Bentley was acting in a show that was running next door. Here, Bentley dishes on their love story’s beginnings.

The first date
Our first date was at the AGO. We were both very nervous and pretended to be interested in art. We walked to dinner at Czehoski’s on Queen West after. Somewhere on the way from the gallery to dinner Ted dropped one of his gloves. It was winter and rush hour and the streets were jam packed with people. Ted was upset (I would learn later that Ted has a knack for losing things) because he had bought them in Newfoundland, and they were sheepskin. I assured Ted that if we retraced our steps we would find them. He thought I was insane and said that would never happen. Sure enough, in the middle of Chinatown I found the glove. At that moment something clicked and we both shared a Jerry Maguire “You complete me” moment.

The courtship
When I met Ted I didn’t know he played piano or had a show called 2 Pianos 4 Hands or anything like that. I just knew that he was a director in the theatre. So, needless to say, the first time Ted got up to play piano at a salon, I was absolutely stunned. I’ll never forget it as long as I live. He played “Great Balls of Fire” and “Bennie and the Jets,” and when he sat back down at the table, I couldn’t speak.

The proposal
We were in New York City for a few days. It was late fall, and we had just finished up at MOMA, and we strolled into Central Park. Ted got down on one knee and proposed, and I ugly cried. No, really ugly cried. I also let out this sound that was a combination of a goose and a foghorn. I was so relieved, excited, thrilled, nervous and in love.

“Ted and I love collaborating and share the same passion: theatre.”

The wedding
We got married at our theatre, the Coal Mine in January of 2017. Our friends and Coal Mine family helped us convert the theatre into our dream wedding venue, and it was just that: a dream wedding. Getting married in the theatre that we had built together felt like the perfect expression of who we are.

The honeymoon
The next morning we took off to Madeira and rode around on a scooter for a week up in the hills.

The kids
I feel very blessed to be the stepmother to Rosie, 15 and Theo, 17. Step-parenting is simultaneously the hardest and most rewarding thing I have done in my life. Every day is a new challenge to be a better version of myself. We are also the proud parents of Henry who is just two months old. He arrived on Sept. 23 and is delighting and entertaining the four of us endlessly.

Balancing work and marriage
Ted and I love collaborating and share the same passion: theatre. When we met, I was producing site-specific independent theatre and Ted was — well he was Ted! When we launched the Coal Mine in the fall of 2014 with The Motherf**ker with the Hat, we had no idea that the theatre would grow into what it has today. The Coal Mine challenges us, but more so it brings us joy, laughter, artistry and depth. Because of it we are surrounded by the most open-hearted and beautiful array of people that we are now lucky enough to call our family. We both have many days where we just dwell on how incredible that is, and that keeps us grounded, connected and humble.

Life after retirement
Retirement? What’s that?! We try to stay in the moment and allow ourselves to be shown what’s next. We both believe in “letting our lives live us” and not the other way around. It’s a tough practice sometimes, but we both are getting better at trusting it. Plus it means we’re continually surprised by what’s in front of us, and that keeps life fun!