Netflix's Alex Mallari Jr. on playing the romantic lead on and off screen
Skip to content 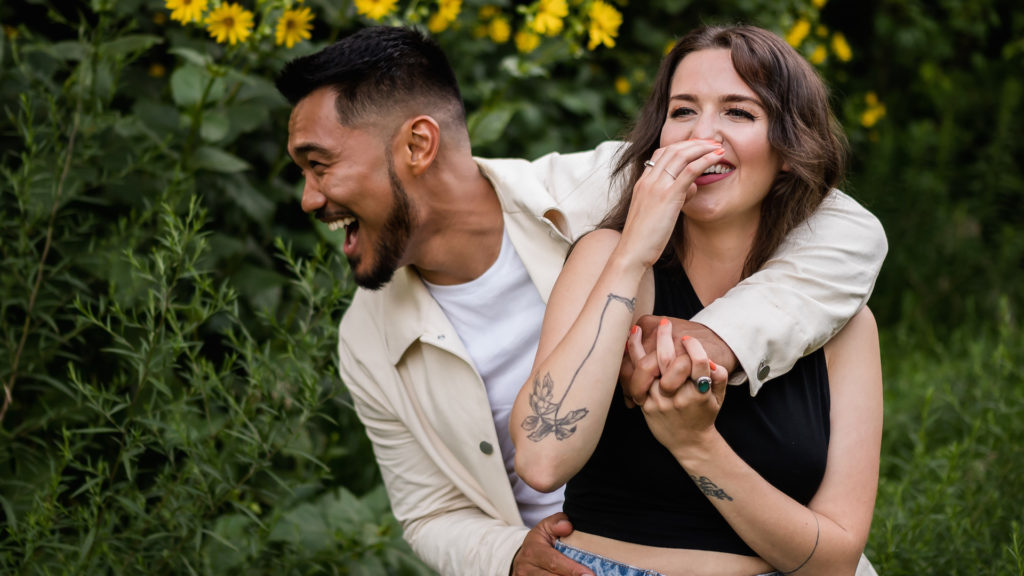 It’s been a banner year for Alex Mallari Jr. He played the villain opposite Ryan Reynolds in Netflix feature film The Adam Project in March and was tapped to play the romantic lead in the CBC web series Hello (Again), co-created by Marvel star Simu Liu. But before that, you’d likely recognize him from one of a handful of successful shows, from Toronto sci-fi series Dark Matter to Netflix’s Ginny & Georgia to a new love interest on Workin’ Moms. After playing a CBC rom-com lead, Mallari shares the behind-the-scenes of his real life romance with his fiancée, Ashley Snook.

Ashley and I met online (dating app for the win!).

‘Twas the eve of Feb. 2, 2019, the night before I left for L.A. for my first-ever pilot season. I picked up Ashley near her old apartment in Little Italy. More specifically, on the corner of College Street and Palmerston Avenue. There’s a little Structube there. I took her to BarChef because they serve the most beautiful and elaborate drinks, and I wanted to not only get to know Ashley, but give her a new experience. We were supposed to go eat somewhere afterwards, but there came a point where nothing else mattered. Where we were didn’t matter, what we were doing, nothing. We were so lost in conversation, so in love with each other’s company. In fact, we were so lost in each other’s company that I had to rush home because I had just a little over two hours to get home, pack my bags and get to the airport. Yes, I made my flight.

It was all memorable. Trip to New York City for our second date, picnics at Trinity Bellwoods, trying each other’s favourite Toronto eats. What was most memorable, though, was the level of comfort I felt straight away. It was a feeling that I’ve always looked for and longed for. A feeling of belonging, a feeling of home. I felt safe.

Remember that first date story? Fast-forward to New Year’s Eve 2021. We left our place to go to BarChef. Due to the pandemic, I couldn’t propose there at midnight like I initially intended to, but the team at BarChef still made the night special for us despite the last-minute changes set out by the province. After leaving, I decided to drive Ashley around to our different little spots throughout the city — unplanned, but I was so grateful that we got to do that. When it was time, I drove back to where I first picked her up, where it all began, at the corner of College and Palmerston. We got out of the car, and as the countdown finished, I got down on one knee and asked her if she’d marry me. She said yes, and right when we kissed, fireworks began to go off. It was perfect. I take zero credit for the fireworks though!

Not married yet. Still enjoying the engagement! My beautiful fiancée is currently in her last year of her PhD. We’ll get to the wedding conversation soon enough.

Balancing their careers and relationship

We choose our family, each other, our relationship and love all the time. Even when it’s difficult. The grass ain’t greener on the other side. It’s green where you water it. Nourish yourself, nourish the other and nourish each other.