How sweet it is - Streets Of Toronto
Skip to content 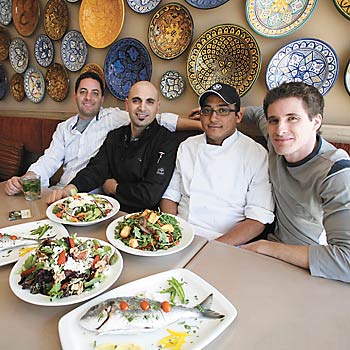 HIGH RESTAURANT TURNOVER may have plagued this address in the past, but Shoom Shoom’s extraordinary service and a bangfor- your-buck modern Middle Eastern menu make this venture viable. The lineup that starts from just inside the door and overflows into the mall’s hallway is a case in point. A very calm and collected hostess juggles the masses. Sunshine permeates the wall of windows along one side, echoed by the brightly lit open kitchen across the room. The decorative theme is neutral — walls, tables, chairs and fabrics a mishmash of light browns, taupes and creams.

Shoom Shoom is the brainchild of the same folks who brought us popular Mashu Mashu in Forest Hill Village. The word shoom translates from Hebrew as “garlic.” And after scanning the lists of homemade soups, hummus, combo plates, hot appetizers, salads and fish and meaty mains, it’s clear that the clove reigns supreme.

Those with a hankering for a taste of this and that should choose four cold items from a list of nine in the combo platter appetizer ($13.99). Soaring above the others is matbouh: slowcooked tomatoes, almost preservelike, with diced green peppers, paprika and garlic. Fantabulous.

Hummus comes in a close second. Dense with tahini and olivey with oil, it’s also seasoned with paprika. Whole wheat and white pitas get put to good use. Tabbouleh has lots to offer in the flavour department: parsley, bulgar, tomatoes, cucumbers, red onion, coriander and mint. Sadly, too much parsley renders the assembly dry and unscoopable.

An assortment of perfect-forplucking pickled vegetables tides over heavyweight hungers. Garlic shrimp ($7.99) sizzles in its own frying pan on a wooden hot plate. Just five of these beauties swim in the hot tub of real lemon juice, olive oil, butter and garlic, but they’re fresh and delicious.

The house salad also deserves bragging rights for its fresh mixed greens, romaine, crunchy cucumbers, tomatoes and carrots. A perfect amount of house vinaigrette brings it all together.

Two strapping beef tenderloin shish kebabs ($17.99) are as tender as can be, grilled at high heat to sear in juices. Slivers of raw purple onion and chopped parsley garnish the pair, giving the plate crunch and colour. A slightly ridiculous portion of immaculately cooked white rice fills the rest of the rectangular plate, sprinkled with roasted almond slivers and red sumac spice (fruity, astringent and similar to lemon).

Our friendly waiter pulled out all the stops, making thoughtful recommendations for wines and courses, taking into consideration plates already selected. A great meal, our only criticism would be that, after asking to take home leftovers, we were brought empty containers and a plastic bag, leaving us to scrape our own plates.

Ratings are on a scale of one to five stars