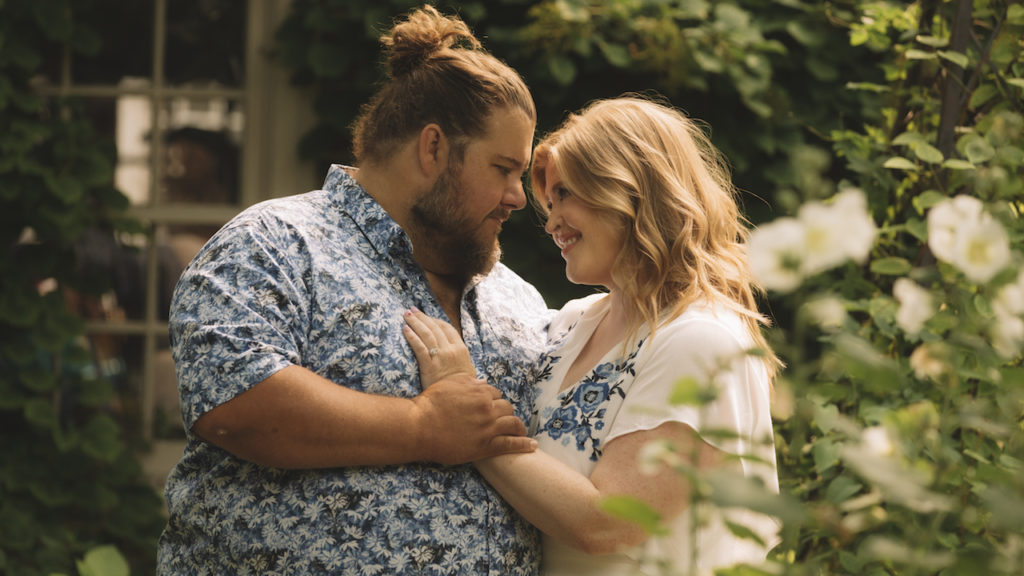 If you don’t recognize Meredith Shaw from her countless TV appearances on The Social, The Marilyn Denis Show and more, you’ll definitely recognize her voice. She’s probably the first thing you hear once you get in the car on the way home from work as a radio host for CHUM 104.5. Her fiancé, Rodney Bowers, also frequents your TV screen, in between his role as head of food media at Centennial College. The couple share the details of their steamy first date, unbelievable proposal and how they juggle their careers.

MS: I think we were both kind of aware of each other because of what we do for a living. But we met at an event that I was emceeing for CHUM-FM. And he was there with a brand he was working with. We always say that Marilyn Denis was kind of our matchmaker.

RB: It took months and months of awkward courting. Our first date, we went for lunch in Little India.

MS: Rod just felt like home to me; he always had the minute I saw him. There was something about him that was familiar. It was that feeling that I’ve heard other people talk about but I hadn’t felt yet. And then when I met him, I did. The first date was nothing like what I would imagine a great first date to be, but it was a great first date. He makes me laugh all the time.

RB: Little did she know, on the date, I actually had one of the hottest peppers I had ever put into my mouth. I was trying to hold it back, sweating profusely, trying to quench my thirst with water.


MS: It was his birthday and we went to this beautiful farm just outside Montreal. It was incredible. He knew the chef and everything we ate there was grown there and picked that day. It was a beautiful glass greenhouse in the middle of the field. About halfway through the meal, the power went out. And then all of a sudden, there were candles everywhere. Rod had nothing to do with this power outage. It just so happened that the universe was kind of on our side. So we’re suddenly in this twinkly greenhouse. At the end of the meal, I said, “OK, we should go, because the chef is probably stressed.”

But he said, “No, let’s wait,” and he was waiting for the other people to leave, so we did. At this point, we’re in darkness, and I remember he got down on the ground. I was thinking, “What are you doing down there?” I could feel him lunging toward me, and I still had no idea what was going on, and then he asked me and I said yes. I was emotional. And then one of the most magical things happened. Rod said, “I wish I could just see your face, because there’s so much joy.” And then in that minute, the lights came back on, and it was just beautiful.

RB: It’s a lot of work. When we do what we do, we need to be patient. I think it works because we’re not too needy. We’re giving, we’re respectful of boundaries and things that the other person has to do. Meredith has 87 jobs, basically: she’s on the radio, she models and she’s a stylist, she’s an expert and she runs all things. I’m a professor, I’m on TV and I’m a chef. The media world is very different on the inside than it is on the outside looking in, and so I think we both have that understanding of what it is, what it takes and what it requires.


MS: It was really cool for us to come together and shoot a television show called Double Your Dish, which we did last year during quarantine. That was really exciting, because we were able to really work together, which we hadn’t done as intensely before. I hope to do more things like that. It was really fun to bring our different passions together.

MS: Humour! I think things are so hard, and relationships are hard, and we’re not exempt from that. But we have a deep, deep love and respect for each other. And I think we also just crack each other up.