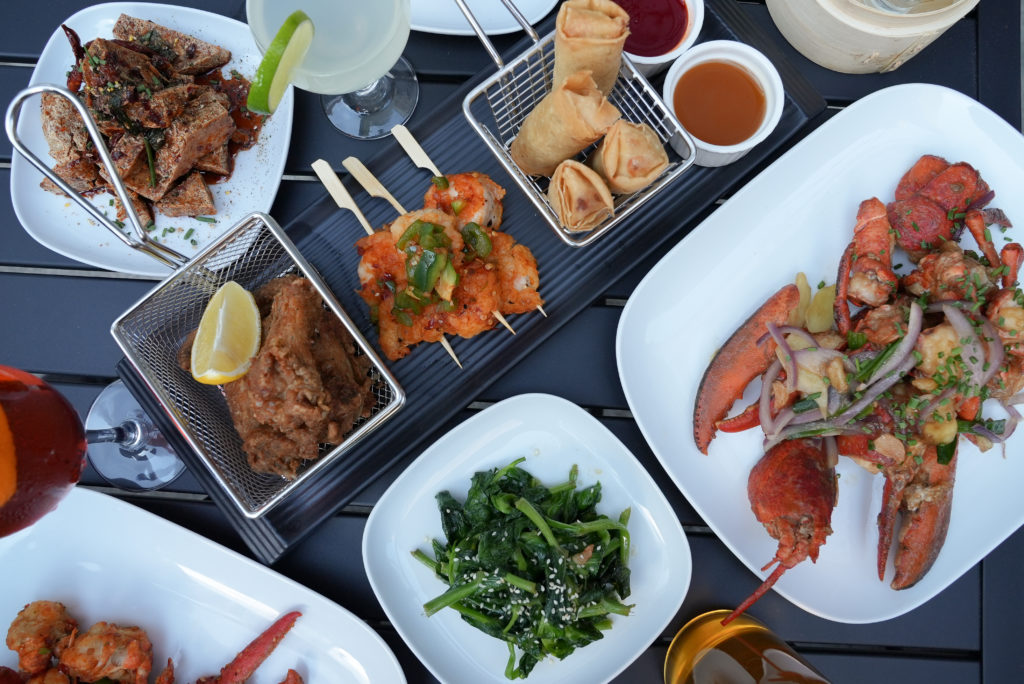 Hong Shing Restaurant has just opened its first-ever patio and is eager to show off a brand new outdoor cocktail bar and revamped tapas menu.

The Chinese restaurant, located in a prime location at Dundas St. West and University Avenue, has been open for 24 years. Five years ago, owner Colin Li took over the family business and decided it was time for a change.

“The restaurant industry, especially Chinese restaurants, has a big space to fill,” Li explained. “It’s either Chinatown-style, or Susur Lee and DaiLo, and that’s the spectrum. I wondered, ‘how can I keep the authenticity of my food and the stuff that I grew up with, but also modernize it in terms of presentation and experience?'”

Before Li took over as the new owner, he says there were roughly 250 items on the menu. “I was so shocked when I first saw it,” Li recalls. “The customers used to flip it like a colouring book, because they had no idea what to order, so I was able to reduce the menu to what it is now. We have a solid 50-60 items in the dining room, but the patio is intended to be Asian tapas-inspired dining, and I’m trying to offer small bites that pair well with our cocktail program.”

The new patio menu is small and concise, but doesn’t skimp on flavour or presentation. The all-star of the patio menu this summer is the Golden Fried Lobster. Brought in from the East Coast daily, Li says this is the dish everyone needs to try, and he sells roughly 75 every day. It’s currently available in six different sauces, all using flavours and ingredients specific to Chinese cuisine.

The Typhoon Shelter Style Lobster, for example, is a traditional dish found in Hong Kong, where Li visited recently on his annual travels back to China. During the summer, Hong Kong encounters many typhoons, which began to hinder the performance of local fishermen. “What the government started doing, was in the summer months, encouraged the fishermen to open a restaurant, because they already knew what to do with the seafood,” Li explained. “The lobster is deep-fried, and seasoned with loads of local ingredients like garlic, green onions, and fermented black beans, and pork and shrimp XO sauce, and that was my inspiration coming back from Hong Kong, because I’ve never seen anything like this here in Toronto.”

“We’re trying to have fun with it because Chinese food has a lot of bold flavours and colours,” Li said. “I’m also trying to prolong the longevity because a lot of Chinese restaurants are of the older generation, and there aren’t many young people coming into the industry, and that’s the biggest void I want to fill. We’re changing the narrative, in a way.”

Hong Shing also has a new cocktail program, run by mixologist and house bartender, Michael Ranger, who has worked in establishments including Casa Mezcal and El Catrin. Ranger has created two summer drinks at Hong Shing which include the Emperor’s Iced Tea (Jiang Xiao Bai Baijiu blended with house lemonade) and the Hong Shing Daiquiri (rum, lychee liquor, lime, sugar, and a splash of grenadine). Diners can also walk up to the open-concept bar and request a cocktail of their choice. “I’ve never seen a Chinese restaurant with a patio before, let alone an outdoor bar, so me and Michael are having fun with it, and trying to do something different,” Li said.

Hong Shing currently has a series of weekly specials, including happy hour from Tuesday to Thursday, where cocktails are $8 from 4 p.m. until 7 p.m., Wine Wednesdays (50 per cent off bottled wine), Lobster Fridays (50 per cent off the second lobster), and Saturday Wing Night (12 wings and a cold tea beer for $20). Li says a bi-weekly cocktail special will also be coming soon.