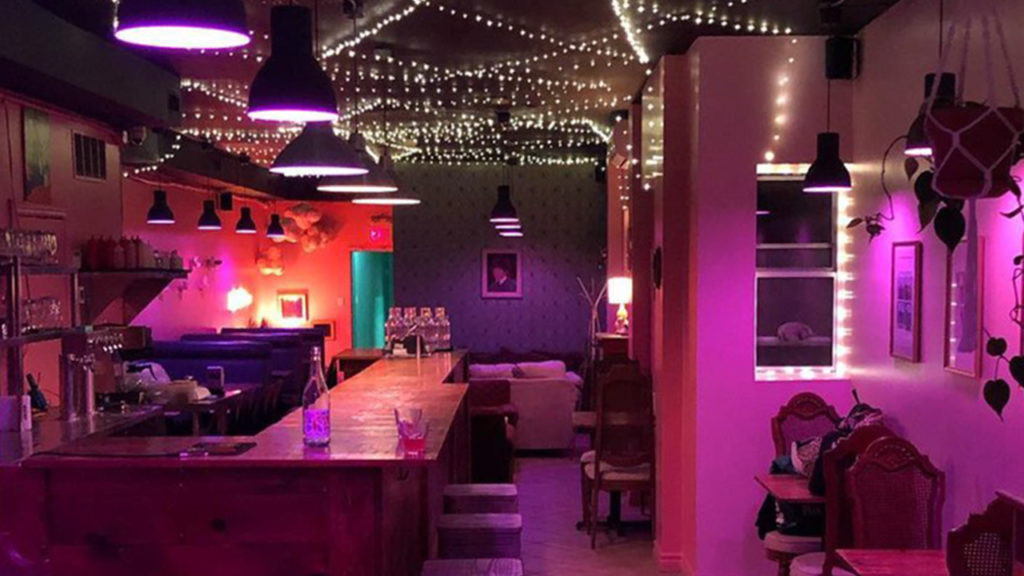 Hunny is an Instagram-worthy hangout spot with all the familiarity and great tastes of Hogtown Vegan.

Hogtown Vegan’s Bloor Street location has been closed since the start of the pandemic, but as restrictions began to lift, the restaurant took the chance to open a whole new concept. Unlike Hogtown Vegan, which is known for its diner-style patio seating, Hunny is a cozier bar restaurant for guests to just hang out for as long as they want.

According to an Instagram post on Hogtown Vegan, Hunny will have a brand-new menu, including pastas like carbonara and a cheesy marinara. “Meaty” mains include the bacon grilled cheese (made with seitan bacon and Daiya cheese), while the lemon coconut cake is a deliciously sweet treat for dessert. And who doesn’t love an all-day breakfast? At Hunny, customers can get eggs ‘n bacon (sourdough bread topped with seitan scrambled eggs and butter-fried seitan bacon) any time of day! But, if like Hogtown’s menu and aren’t a fan of change, Hunny’s will include some of Hogtown’s most popular items, like the Caesar Salad and gooey Mac ‘n Cheez, which is baked and topped with herbed breadcrumbs. In case it wasn’t obvious, everything on the menu is entirely vegan. The drink menu will be similar to Hogtown Vegan’s with draught beer and classic cocktails. New cocktails on the menu include a gin Lavender Collins and a Billionaire for bourbon lovers.

Though Hunny only recently opened Nov. 4, the restaurant’s Instagram has been teasing followers with a sneak peek for weeks. Hunny is a place you’ll want to hang out in, with comfy couches, lots of plantlife, colourful bright lights, and all around “cool new vibes.” One section of the restaurant is home to the “Great Wall of Knicknacks,” which is, well, small shelves of animal knickknacks scattered along a pink wall. A neon “I’m a Princess” sign hangs over a cozy arm chair (or thrown), which has already become an Instagram-worthy selfie location. This comfortable and trendy place is the kind you won’t want to leave!

Hunny is open Thursdays through Sundays from 5 p.m until midnight at 1056 Bloor Street West. They are currently not accepting reservations, so you better get in early because this place is sure to fill up fast!