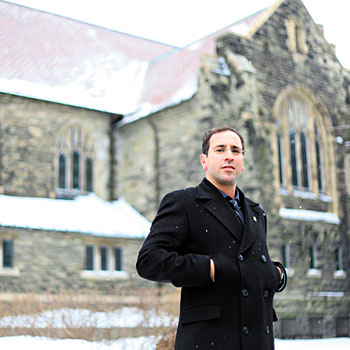 For a century, the neo-Gothic Deer Park United Church on the corner of St. Clair Avenue West and Avenue Road has stood still, while nearby the buildings have grown denser and higher. However, a new development application for a 32-storey condominium and five townhouses proposes to change all that, but locals say concessions must come first.

“The fact that this has been a house of worship merits very thoughtful consideration as to the future integrity of the building,” said local councillor Josh Matlow, regarding the church at 129 St. Clair Ave. W.

The developer, Diamond Corp., has proposed building a tower just behind the church, and converting the church into lofts that abide by the church’s 2008 heritage designation.

However, some local residents are opposing the plan. During a meeting last month, residents of abutting Foxbar Road expressed concern over the proposed height of the development, potential traffic issues, the condo’s proximity to their street and how the heritage designation will be addressed. “The impact on the neighbourhood and the traffic flow is a big concern,” said Foxbar resident John Taylor. Taylor called the meeting a “good discussion” and said locals will be watching the proposal as it develops.

Bob Blazevski, vice-president of Diamond Corp., said the site’s access route for service vehicles will be off St. Clair Avenue, minimizing impact on Foxbar Road. “I think you have to come up with a solution that addresses everyone’s concerns. And that’s been our attempt here,” he said.

When the developer bought the property, the congregation had already moved into a shared worship space at Calvin Presbyterian Church. The Deer Park church had been desanctified in 2008, after a declining worship population and rising maintenance costs made upkeep difficult.

As for the future of the site, Matlow said he has asked the developer to provide several proposals for the site. He also said there will be a public meeting likely sometime in the next few months.