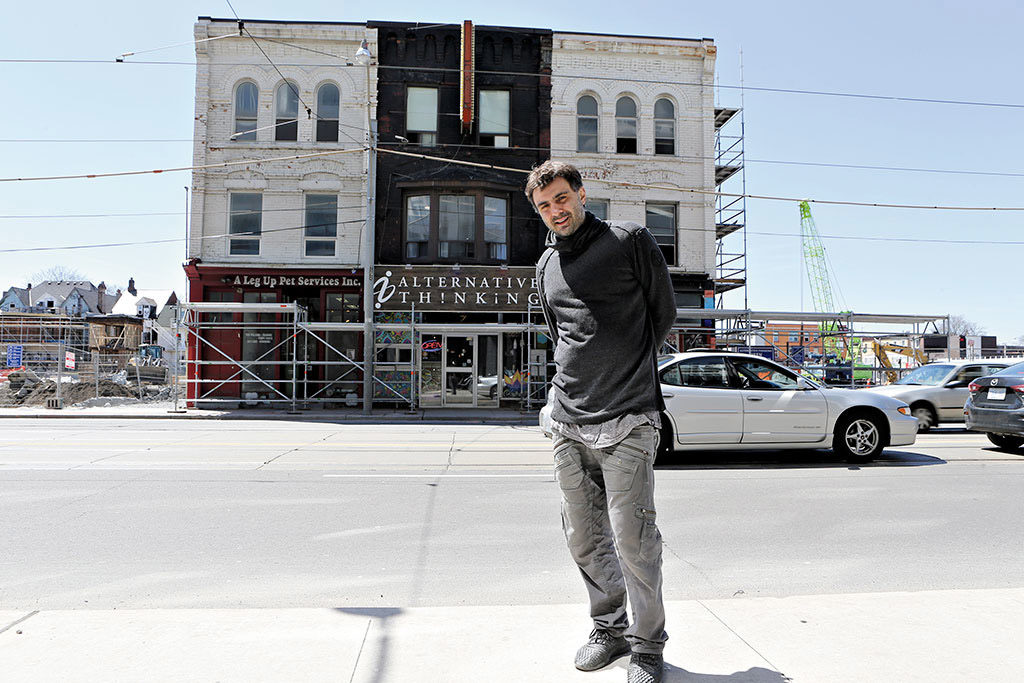 On the west side of Bathurst Street heavily covered by scaffolding from the ongoing demolition of the old Mirvish Village, only one store remains in operation –– Alternative Thinking, a large bookstore and café at 758 Bathurst St. that specializes in healing crystals, herbal remedies and niche books.

After Vancouver developer Westbank Corp. purchased Honest Ed’s and properties in the Mirvish Village area in 2013, Alternative Thinking saw the neighbourhood change: The B. streets condos across the street were built, and people moved in. Stores around them shuttered one by one, having been sold to Westbank. Honest Ed’s closed and was then dismantled. In place of the bustling artistic hub of Mirvish Village behind them is now a gated construction zone. However, David Spiro, the owner of the building that houses Alternative Thinking, never sold.

With the new Mirvish Village development on the horizon, the neighbourhood is positioned for even more dramatic change.

“I’m not really sure what’s going to happen or where we’re going to go,” he said. “We feel pretty optimistic. Feels OK at the moment.”

Whereas most independent business owners would be concerned about construction and the changing character of the neighbourhood when a new developer moves in, Mekvabishvili is confident that one of Westbank’s top priorities is preserving the area’s character.

“The project has so many layers of history to it,” said Jonah Letovsky, Westbank Corp.’s development manager for Mirvish Village. “The way we’re seeing it is adding more layers on, instead of wiping out what was there and starting with something completely new.”

“We’re adding more layers on, instead of wiping out what was there and starting with something completely new.”

What that means is completely purpose-built rental units, half of which will be family-sized, and 10 per cent of which will be “deeply affordable” and implemented in partnership with the City of Toronto. It also involves a micro-retail program for independent entrepreneurs and a 35,000-square-foot public market not unlike the old Honest Ed’s.

“We believe the project is highly innovative and has a huge residential component,” said Brian Burchall, chair of the Mirvish Village BIA. “We welcome that. There’ll also be considerable retail. The retail that’s planned there will be equal to what was there before, which is pretty extraordinary if you think about it.”

Part of Westbank Corp.’s retail vision is maintaining some of the pre-existing community gems, like A Different Booklist, an Afro-centric independent bookstore and cultural hub that focuses on titles from diverse people, which has been moved into the B. streets condos and will become a larger community centre when the new Mirvish Village is built. Letovsky admits that Westbank had approached Spiro to buy the building.

“Initially, the thinking was ‘It would be great to integrate that into the property,’ ” said Letovsky. “But now we think that it’s actually this really interesting talisman of the past in the middle of the property. Certainly, that flavour of diverse retail is exactly what we’re going for with Mirvish Village.”

In the design plans, 758 and 756 Bathurst St. are the only three-storey brick buildings nestled between towers of glass condos, soaring well over 20 storeys higher.

So for now, the local purveyor of Bloodstone energy crystals, tarot cards, psychedelic manuals and vegan cheesecakes will remain as it is while the area gets overhauled from the ground up.

“It was reflective of the whole area that had existed before. I would expect that they would still be there after the development,” said Burchall of Alternative Thinking.

Westbank Corp. is aiming for a construction completion date of late 2020 to early 2021.