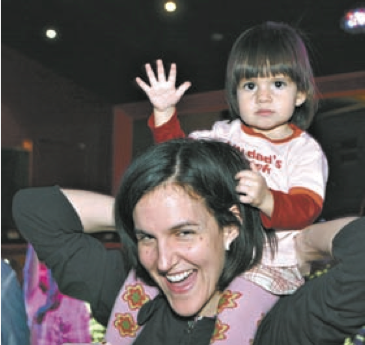 LIKE MANY MODERN moms, most nights you’ll find me on Facebook and Twitter (if you don’t know what Twitter is, read on). One of those evenings, a birth announcement popped up from Amber MacArthur, TV host and social media strategist.

The last time I saw Amber, we were tablemates at the Gemini Awards. All we had in common was a passion for television.

Since becoming a new mom to Conner two months ago, Amber has shifted her interests to include the low-tech world of babies and the high-tech world of moms on the net. Now we have a ton in common.

Amber does things her own way. A decade ago, after a stint as a general reporter with the CBC, curiosity led her to San Francisco, and a job with leading edge web-design company Razorfish. Within months she was enjoying the high life of the Silicon Valley tech boom, networking with the movers and the shakers of the industry.

When she moved back to Canada four years later, Amber parlayed her experience into hosting the TV lifestyle program Gadgets and Gizmos. That role led to her current stint as tech specialist for CP24, traditionally male territory.

Today Amber is also in high demand as a social media networking consultant for businesses looking to connect with consumers in new ways.

Amber is aware that she is working in a field traditionally associated with men, which is why she never announced she was expecting until she was nine months pregnant! “I was worried about the effect of pregnancy on my business,” she admits. “I didn’t want to get passed over for media opportunities on television because of my belly. I told people on a podcast four days before I was due.”

Amber has no regrets about keeping her pregnancy a secret. “For many women, being pregnant has a big impact on the way you’re perceived in business, if you like to admit it or not.”

Now that Amber has a babe in arms, she hasn’t lost any of her online cool. She continues to be one of the most followed Canadians on Twitter — the latest social networking craze — with more than 27,000 followers who receive her hourly technology “tweets.”

Since becoming a mom, Amber’s use of technology has also shifted. Here are her four favourite online tools to make a mom’s busy life easier.

1. Social networking sites, like Facebook — “I feel more connected to old friends now since we’re all having kids at the same time. Sites like Facebook let me keep in touch with friends and family and we can all post photos of our babies.”

2. Twitter.com — “For those nights when you need quick late night advice, there’s an instant online community to give their support. Last night I was up at 2:30 a.m. worried because my son was having reactions to his shots. I sent out a note mentioning my concerns and I had two dozen responses sharing their experiences which let me sleep better.

3. Google — “It’s the ultimate in multi-tasking. Google is not just about search. They have a lot of free tools to manage e-mail, calendars and a to do list. They’re nicely integrated together. I use them all.”

4. Skype: “I use Skype as a video chat to show Conner off to my family on the East Coast. I use the built-in web camera on my Mac. Skype is free, and my parents can see my son grow up on a regular basis. Even my parents know how to use it.” Post City Magazines’ parenting columnist, Erica Ehm is the voice of yummy mummies with her playful website yummymummyclub.ca. After all, mommies need to play, too.