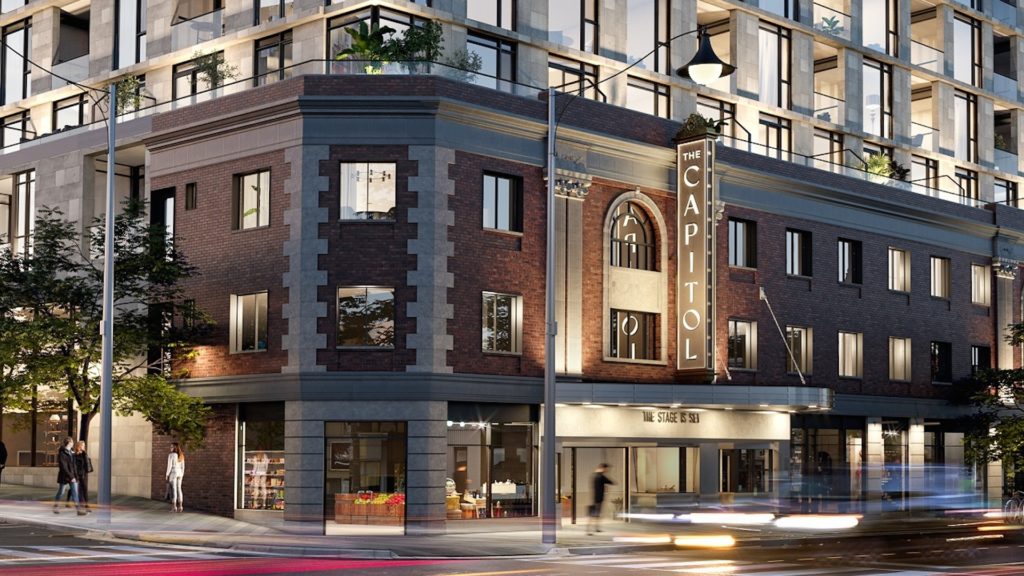 Plans are coming together for the restoration of the historic Capitol Theatre near Yonge and Eglinton and the construction of a condo above it.

Developer Madison Group, along with Turner Fleischer Architects and Hariri Pontarini Architects, have come to an agreement with the city regarding how to best preserve elements of the theatre that date back to 1914.

Josh Zagdanski, VP High-Rise, Madison Group, said that the early 20th-century Classical Revival-style exterior, the theatre’s Art Deco stainless steel marque and its entrance will be preserved and restored, while the interior vestibule and the theatre space will be rebuilt.

“[The Capitol Theatre] has been host to celebrities, premiers and most importantly, generations of Toronto residents,” Zagdanski said. “The history and essence of the Capitol Theatre is the foundation and really drove the entire project.”

The three-storey building on the corner of Yonge and Castlefield helped the area gain commercial success in the early 20th century and is also linked to well-known Toronto architect Murray Brown, who designed a number of other theatres across the city, according to a heritage report.

It was originally the York Theatre when first built in 1914 and renamed the Capitol Theatre Building in 1922 after a three-storey building and new entrance were constructred. It began as a combined silent movie and vaudeville theatre, then later hosted pictures with sound and became an event space in the late 1990s.

“The Capitol Theatre Building is a local landmark in North Toronto … with its chamfered corner, distinctive scale and decorative detailing,” the city report said.

The planned 14-storey condo will be set back from the front of the theatre and feature 145 units consisting of one, two and three-bedroom suites.

Zagdanski said the vertical addition will be “complementary” to the theatre but won’t “mimic it.”

“The intent is for [the additions] to be timeless,” he said. “You’ll see elements of limestone working their way up the terrace of the building as it steps away from Yonge Street.”

The ground-floor interior of the theatre will be converted into retail space, but the tenants have not been determined yet, according to Zagdanski.

Sales for the condos are launching this summer. Zagdanski hopes for construction to begin early next year and to finish 24 to 30 months later.