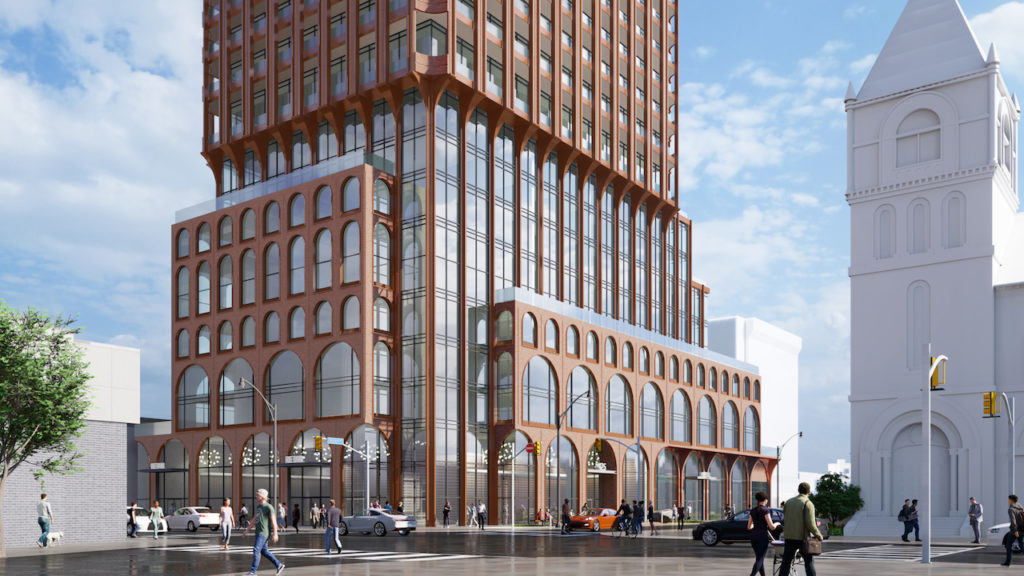 The real estate developers behind a future mixed-use condo tower in the Annex are now pitching another high-rise project directly across the street in Harbord Village.

ANDRIN, the Brown Group of Companies Inc., Lakeview Homes, and Streetwise Properties are setting their sights on building a 30-storey mixed-use tower at 425 Bloor St. W., where a Metro grocery store stands today.

City council approved rezoning for the group’s 350 Bloor St. W. proposal for a 35-storey tower, including both condos and rental apartments as well as retail and office space. The proposal for 425 Bloor St. W., submitted to the city last month, is “very much informed” by the previous community-consultation process, says Jay Brown, development manager at the Brown Group.

The proposal includes 418 residential units, which Brown says are being planned as condos, as well as 1,444 square metres of retail space on the first floor and mezzanine of the building’s podium, which ranges from one to six storeys in height. “We’re trying to allow for flexibility for various retail floorplates,” explains Brown, “but it’s very early in the process to know who the ultimate retailer will be.” Two levels of underground parking provide room for 65 parking spots, of which 60 would have electric-vehicle outlets for charging.

The tower’s design, by IBI Group, takes cues from the surrounding neighbourhood. Its arches, for example, are a reference to the historic Trinity-St. Paul’s United Church at 427 Bloor St. W., and the red-brick facade blends with many older buildings and houses nearby. “We’re looking for our architectural design to take inspiration from the Annex,” explains Brown.

Some in the community say it’s too early to comment on the 425 Bloor St. W. condo proposal because the More Homes Built Faster Act — which the province introduced last month and proposes broad changes to local planning policies — has created too much uncertainty.

“In general, we can’t comment on any specific building,” Sue Dexter, who is on the Harbord Village Residents Association’s planning committee, tells Post City. “We have absolutely no idea what the rules are at this point.”

While Dexter declined to speak about the project specifically, she did provide an inventory of elements the HVRA supports in new developments. Sustainability, green space, and supporting “demographic diversity” are among the association’s priorities. A proposal’s height, she adds, is only part of the equation. “We would like affordability as part of the package, but it has to be paid for by someone,” she says.

Dexter also says the proposal needs to be looked at in the context of other nearby condo developments undergoing the approvals process: “We have a massive amount of density coming in — greater than Mirvish Village — and it’s all going to come in pretty quickly.”