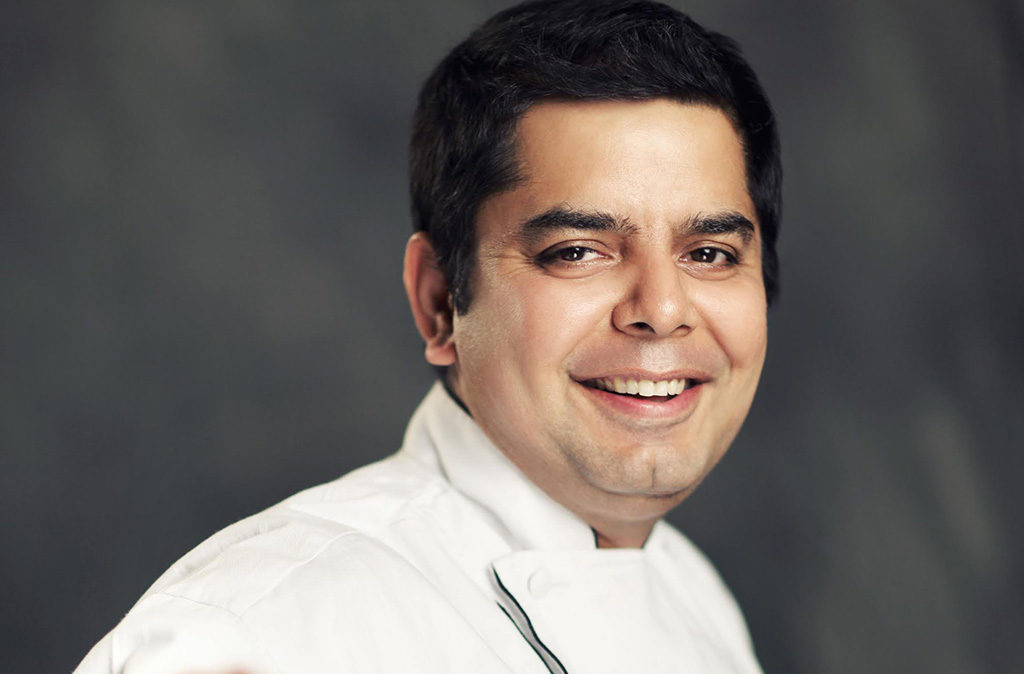 Update: Head over to our First Look at Indian Street Food Company for more details on the menu and photos of the food.

Over the last 11 years, chef and restaurateur Hemant Bhagwani has played a pivotal role in shaping the city’s perspectives on Indian food. He hopes that his plans to remake his restaurant business will continue to have a profound impact on how Toronto approaches Indian food.

He’s opened a slew of restaurants, some refined dining and some casual eateries all offering their spin on regional Indian food as seen through a global prism. The story started with Kamasutra Indian restaurant and wine bar on Bayview in 2004.  “It was my concept, I put it together. Back then the scene was more Northern Indian cuisine, Punjabi food,” he said when we talked by phone.

Bhagwani sold the (still open) restaurant a year later and moved on to open Amaya up the street. Amaya was ground-breaking in many ways when it opened in 2007. It immediately garnered praise from critics for its vibrant approach to food, and created a template for modern Indian fusion that since has been repeatedly copied throughout the GTA. During that time, regional Indian food (from Chettinad, Kerala, Rasjasthan) started to take off in Toronto.

With Amaya, although the restaurant’s spine was in traditional Indian cooking, there were liberal influences from North American, Asian and European cuisine. He opened the restaurant with Derek Valleau as Partner. Valleau left the company in 2011 and has since gone on to open Pukka and Concession Road on St. Clair West.

“When I opened Amaya, it got me going. We moved from Punjabi cuisine in the city, to regional food. It was then about modern Indian food,” Bhagwani said. “We were inspiring ourselves to take a European approach to presenting Indian food.”

Over the next 7 years, Bhagwani started to spread his wings. With Amaya Express, he branched out to bring fast-service Indian food to various corners of the city from Ossington to Leslieville with over a half a dozen locations. The quality started to drop noticeably. I’ve eaten at nearly every express location, none of the meals had the same layered nuances and flavours that the original Amaya did. Three express locations have since closed.

Bhagwani noticed a shift in palates: “Diners want more authentic cuisine, they want simpler dishes. It has to tell a story and speak to a place.”

As the express stores started to close, Bhagwani was starting to get restless. Earlier this summer it was announced that Bhagwani was closing Amaya Indian Room after the city’s Summerlicious program. “Really, I was getting bored. I just wanted to go away from butter chicken and chicken vindaloo and korma. I wanted to strip it down to the bare minimum and do something casual and fun and interesting.”

During a recent food trip through India, he had the opportunity to eat at many of the country’s prevalent Irani cafes – fast food bars and restaurants opened by Persian immigrants in the last 70 years. The food is a mix of Iranian and Indian cuisine set in colonial-style buildings and an assortment of teas and coffee drinks.

Bhagwani also spent a lot of time eating street food at various railway stations. In many parts of India, street food vendors set up in densely packed areas like railways stations and schools.  “There was a lot of vibrancy with the food,” he explained. “So much creativity, more than what you find in restaurants.”

It was an afternoon of eating street snacks from newspaper cones at the Dehi railway station that convinced Bhagwani that his next project had to connect with street food.

“It took me back to my childhood. Eating aloo tikki, chicken nantha roti on newspapers on the street. I wanted to bring that experience into a restaurant.

Bhagwani was inspired by this and found a space in Mississauga on Eglinton West to open a café (488 Eglinton Ave. W., Mississauga). Doors opened last week to Sindhi Indian street food. “It’s an ethnic-style Indian restaurant focusing on street food,” he says, “but very much like the Irani cafes. At Indian restaurants, people love to pay tribute to mom’s cooking. Street level it’s all about being creative.”

Apparently, the crowds love it so far. “We’re seeing about 250 to 300 people daily right now,” Bhagwani says of Sindhi.

The menu is a regional mix of biryanis, tandoori cooked meats, stuffed rotis and curries. “There’s a dish I grew up eating, left over mutton curry on bread. One of the simplest dishes you’ll have, it’s the most popular dish at Sindhi right now.”

Many Indians grew up eating the combination for breakfast. You take whatever is leftover from the day before, preferably curry that is thick and loaded with meat, and pour it over two thick slices of bread. You tear off a piece of bread, scoop up the meat and sometimes top it with some chutney or cooked veggies.

With Sindhi off to a good start, Bhagwani is currently working on the former Amaya space on Bayview, a couple blocks south of Eglinton. “After Amaya, I wanted to take Indian food to the next level. It’s about street food for me now. We’re going to re-open as Indian Street Food Company,” Bhagwani elaborates.

Indian SFC is Bhagwani’s tribute to hawker markets and railway food from various parts of India. “I am the one doing the menu and all recipes plus presentation. Chef Kamleshwar Prasad (executive chef) will take over from me with Devender Singh on Tandoor and Prem Singh on the range.”

The menu will have 25 items with a price range from $7 to $12. Bhagwani himself is finishing the designs on the 56 seat restaurant, and from the sounds of it he’s following David Sidhu’s (Playa Cabana) playbook by sourcing furniture and various tchotchkes from the same place he found culinary inspiration — India in this case. “We have street lamps coming in from India. The door will be fun take on the royal gold doors you see in palaces in India.”

The menu will be comprised of street snacks like prawn rava fry, Kerala fried chicken (KFC), chickpea snacks, and some biryanis and curries. Bhagwani was finalizing the menu when we spoke. “We’re going to play around a little bit, but it will be as authentic as you can get. This is what I ate as a child, not something I’m just trying to promote.”

Much like the original Amaya Indian Room, wine will be a key focus. Bhagwani is also keen on bringing in as many imported sodas and drinks as he can to round out the street food experience. He’s planning to have a menu of gola (shaved ice drinks popular in Mumbai) and kulfi (frozen dairy desserts).

Bhagwani plans to open Indian Street Food Company within the next two weeks. “I’m aiming for the first week of September,” he said.