Cowabunga eh: Surfing the Great Lakes is all the rage in the GTA
Skip to content 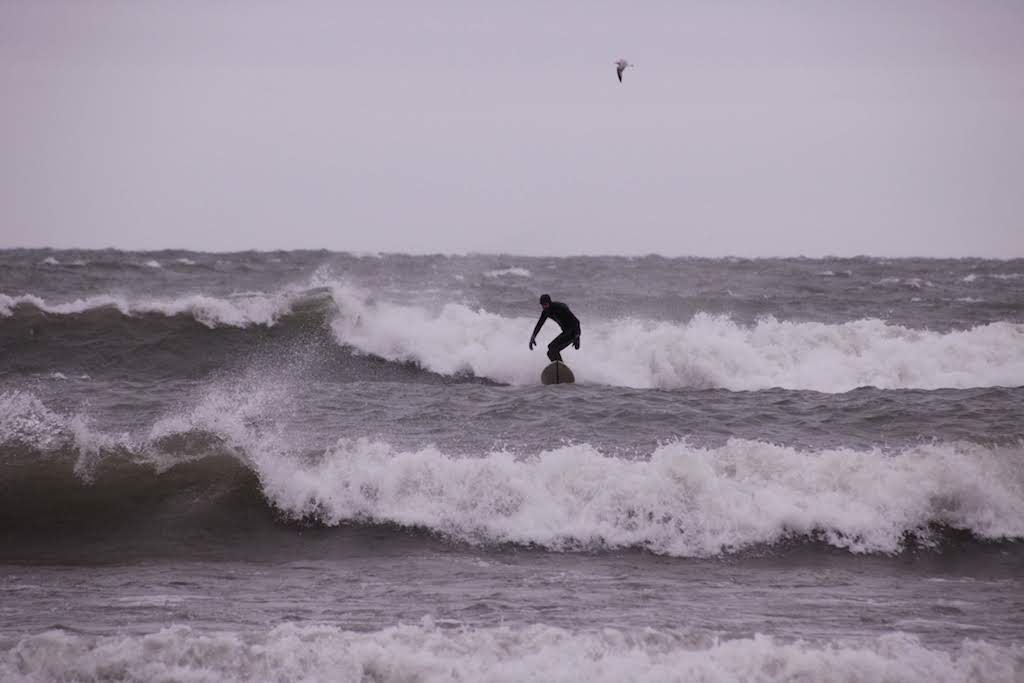 Although a little on the cooler side, Canada does have plenty of primo surfing spots from Tofino and the west coast of Vancouver Island to Lawrencetown Beach and other areas on the Atlantic side of the geographic ledger in Nova Scotia. But, there are also 10,000 kilometres of coastline smack dab in the middle of it all: the Great Lakes.

Interest in Great Lakes surfing has been growing steadily in the Toronto area over the last number of years, largely thanks to the increased love of surfing in general. And, when you can’t make it to saltwater, you make do with what’s available. And, for many, that means braving cold temperatures and inconsistent waves.

Many have learned to not only tolerate surfing the Great Lakes but consider all the gear and scrambles over icy rocks and piers, to be part of the charm. Even Tim Matthews, who grew up surfing gorgeous waves on white-sand beaches in Hawaii.

Right now, as the temperatures drop and the winds shift with the introduction of the chilly season, Great Lakes surfers are checking their gear, waxing their boards, and making sure they have their extra-thick wetsuits at the ready because the season is about to get real.

Matthews has been surfing most of his life, but only in the last few years in Ontario, after marrying a Scarborough native. He grew up in the surfing destination of Hawaii and spent time in Hermosa Beach, California as well. When he followed true love to Toronto, he had no idea he’d be gearing up in thick wetsuits and booties and surfing during blizzards and epic storms. But now he loves it.

Now, Matthews works with Surf Ontario offering, amongst other things, lessons to would-be Great Lakes surfers in one of the province’s oldest and best surf shops.

“The first time I had a swell that rolled in that was good enough to go surf was like December and I was in this secondhand suit that Mike (Surf Ontario founder Mike Sandusky) had given me and it was just you know real surreal,” he says, on the phone from his Toronto home where he’s preparing for a surf session at Bluffer’s Park on Lake Ontario.

“Like you grow up surfing white sand beaches and you know palm trees and the whole kit and caboodle but now you get blasted in the face with sleet like it’s, you know, rock salt or whatever. It’s a whole different awakening and you have a different kind of mentality when you see the snow. It’s hard to describe.”

It’s important to remember that there is more coastline along the Great Lakes than both the East and West coasts of Canada combined. Although most people start at established locations on Lake Ontario, Lake Erie or Lake Huron, there are thousands of potential spots.

Of course, Matthews isn’t one to give up his secret wave stash, but he says that it makes sense to start at a place like Bluffer’s Park or Ashbridges Bay in Toronto, or Port Colborne on Lake Erie, or in the Kincardine area on Lake Huron.

There are also thriving surf scenes on lakes Michigan and Superior on both sides of the border.

“If you are willing to be more adventurous and put in the miles or excuse me kilometres, and the work and all that you can find some secret spots, and it’s cool. And it just takes, you know, a junior meteorology degree and Google Earth and you’ve pretty much got the components we’re working with,” Matthews says. “You’ve got to learn the science of it. But you can find these spots. Again with the crowd, you know, people are chatty, and they’ll say things if you ask questions and you’re polite.”

As far as the waves themselves go, Matthews says it can be anywhere from sloppy little longboard waves that are knee-high and fun to more serious surf where it can reach overhead, six or seven feet tall from the face and feel almost “ocean-esque.” But for waves like that, expect major storms in November and December. But, the first thing about the waves he had to get used to was what he called the “swell period.”

The swell period, the time from wave crest to the next wave crest, can be a consistent 14-16 seconds in California, longer in Hawaii. But on the Great Lakes, that drops to six seconds. And that translates to have very little time to look for waves and find a quality ride.

“To be honest, I think luck is a much bigger factor here. Like, as much as I have good wave vision and I can look out and say, okay, that’s where I’m gonna catch a wave,” explains Matthews. “But a lot of times, I just kind of get lucky and I’m in the right place at the right time, which is you know, democratizing, because there’s still that element of luck to it.”

The waves on the Great Lakes also lack the power of waves in Hawaii or other oceanic destinations, which leads many to opt for longboards out on the water. But, Matthews says he’s surfed the waves on pretty much everything.

“A lot of people think life should begin and end on the longboard and if you’re learning, I would say jumping on a nine-foot, soft top is great because you pack a lot of volume without having to pick up too much length,” he says. “But, I really can ride anything like I ride the same stuff I ride in Hawaii. Sometimes, I’m six-foot-one and weigh about 180 and my shortboard is a five-foot-four. It’s just a matter of getting started.”

And, to do Great Lakes surfing right requires a serious commitment to equipment, especially very thick wetsuits, but even that has its bright side.

“You just have to expect to have so much stuff you don’t know what to do with it,” Matthews says. “Like in Hawaii, I throw on a pair of shorts and pull a board out from under the house. You know, I walk to the beach barefoot and I have all but two things with me. Right now I’m getting ready to go surf and I have to figure out which wetsuit I’m going to wear, and  I’m going with the five-millimetre or the 4.3.  I’m thinking about booties and gloves. When it gets really cold into the season, I’m thinking about putting like, boiling water into a jug to just pour on myself when I get out.”

Again, Matthews is enamoured with that side of the process. And, with all the heavy material and boots and gloves, he’s been in the best surfing shape of his life.

“Just expect to be in the best shape of your life,” he says. “When I go back home and I’m not wearing five millimetres of a wetsuit, I’m just a beast. So it’s the best workout you can imagine if you’re looking for a challenge.”

Matthews describes the scene as friendly and respectful, and there is an etiquette that needs to be learned and it is, indeed, one of the first things he teaches. There are also several surf clubs along the Great Lakes that might offer new and established surfers alike a greater sense of community in addition to an opportunity to tap into a hive mind.

For instance, Lake Surfistas in the Greater Toronto Area as well as Wyldewood Surf Club on Lake Erie.

Wyldewood’s Matt Roy, who has been surfing for close to 30 years, says he’s seen steady growth around the Great Lakes thanks to social media as people start to realize what is possible on the freshwater waves.

“The surf scene has really exploded,” he says. “Facebook and other social media platforms allow more people to talk about surfing and spreading the word, as well as Central and South American transplants realizing that the Great Lakes produce surfable waves. Prior to that, it was all word of mouth, knowing how to read forecasts and phone trees.”

Each November, Wyldewood plays host to the annual Gales of November surf contest on the shores of Lake Erie at Pleasant Beach, although this year is likely cancelled thanks to COVID-19.

The crowd is another one of the unique elements of the Great Lakes surfing scene.

In Hawaii, California, or any other well-established wave hot spot, the surfing community goes back decades. Everybody knows everybody, and it can be, a little insular. Not on the Great Lakes, and especially not in the Toronto area. The community is fresh and new, and the best surfers in the lineup are from other places.

“It’s the most eclectic surf scene I’ve ever seen in my life. Like I’ll paddle out at the Bluffs and I’ll hear Portuguese being spoken and four or five different languages and it’s like all these different people who learned how to surf in Peru and all these other places,” he says. “But it’s getting there. I guarantee within the next decade, we’ll have a Canadian national team contender from the Great Lakes.”

Matthews says he sometimes feels like an anthropologist, and most surely like a pioneer at the forefront of this new Great Lakes surfing movement. And that alone is worth all the equipment and hassle and hardship to get the good waves.

“There are places I’ve surfed that maybe a handful of people have surfed,” he says. “And you know, it’s something where you get like a craving for adventure. You know, I’m suiting up and it’s got blizzard conditions outside, it’s dumping two feet of snow and maybe 90-knot winds coming around the corner making just epic waves. It’s just like you’re excited about stuff I would never have been excited about.  Like, I’ve never gotten as excited for a five or six-foot wave anywhere as I have here.”