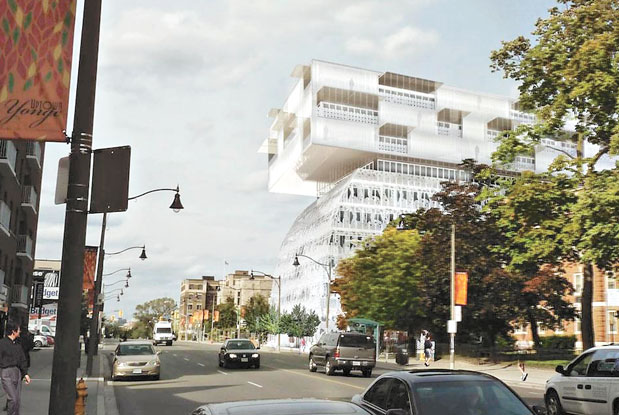 Gracious tree-lined streets, dignified early-20th century brick homes, unique little shops. When I moved to North Toronto from Vancouver in 2004, I was immediately taken with the uptown Yonge area. Although I’ve moved three times since then, I’ve remained in the same neighbourhood.

My neighbours and I take pride in the distinctive character of uptown Yonge. This is why we are opposed to the 11-storey, avant-garde condo proposed for the corner of Yonge and Strathgowan. Designed by Will Alsop, “Alaska” would neither fit in with its context nor comply with the zoning bylaw and city policies for mid-rise development. Why? First, because the significance of neighbourhoods is encoded in the official plan (OP), a legal document that articulates the city’s urban planning policies. The OP stipulates that a new development adjacent to a neighbourhood must “fit harmoniously” into its context.

With a “tabletop” design reminiscent of the Rosalie Sharp Pavillion at OCAD, Alaska in no way respects the dominant aesthetic of the area. Second, if the current proposal is approved, Alaska would set a precedent for future development along this section of Yonge Street, opening the sluice gates for similarly inappropriate developments — and a radical transformation of the fundamental character of uptown Yonge. Although I’m not opposed to development — growth and change are necessary for a city’s vitality — I am opposed to development that disregards both the legal framework and the feedback of residents. Why can’t Alaska’s team build a building that complies with our urban planning policies and that enhances the pre-existing character of uptown Yonge? For despite the claims of Alaska’s proponents, our neighbourhood deserves this respect.

That part of Yonge Street — Yonge and Strathgowan — which is roughly halfway between Eglinton and Lawrence, is a part of the street that doesn’t belong to either of those two places, it feels very much as though it is somewhere else. And for that reason, the whole quality of Yonge Street drops away at that midpoint.

What we’re trying to do is to create something that is a good-quality piece of architecture that’s absolutely genuine, something that makes this a point whereby we might stretch the variety of shops and things. And, we feel that the area needs a bit of height, too. We actually were a bit brave, and we went about five meters above the planner’s recommendation for height. Also, there’s no sidewalk there, and so we’d like to put one there. Young children in the area have to cross the road to walk to school because they can’t walk along the street. We’d also like to plant trees, plus more things. Everyone hates change. But, keep in mind that further down, toward Eglinton, there are something like 30 mid-rise buildings. Some are under construction and some are in the planning stage. So, you know, cities evolve and change, and that’s what we like about cities. But it just seems to me that in this particular part, which is surrounded by well-formed neighbourhoods on either side, [they] don’t want anything to change at all. Well, I think that’s unrealistic. Change happens, which is why I’m not really fond of master plans, actually, because it’s trying to do too much all at once. It tends to stultify the sort of evolutionary process I’m referring to, which I think is a natural process. It’s the way that we are.

I’m very confident that doing this will have a very positive effect on that part of Yonge Street. And I hope it does, of course.