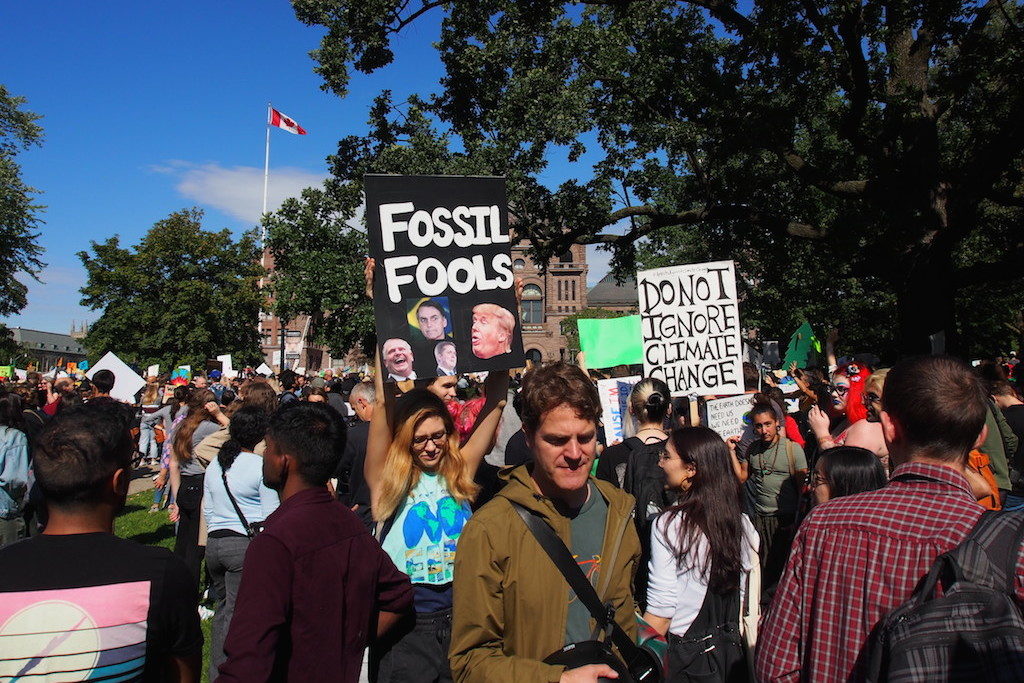 Thousands of protesters flocked to Queen’s Park on Friday as part of the youth-led Global Climate Strike. The demonstrators joined more than four million people across the world in a series of strikes leading up to the UN’s Climate Action Summit.

Starting at 11 a.m., students, parents with young children, and adults of all ages started to fill the park. Many of the people in attendance bore homemade signs with slogans such as “Hot girl summer should only be seasonal,” “Who needs school if the planet dies?” and “I was hoping for a cooler death.” Around 12 p.m. the group marched from Queen’s Park onto Wellesley and down Yonge Street all the way to Queen Street. They then marched back up University Avenue to return to Queen’s Park, where a massive concert was held.

Toronto’s Fridays for Future chapter organized the event, led by Aliénor Rougeot, a student at the University of Toronto.

“We’re at the point where we’re so close to the edge, we’re literally going to fall off the cliff,” said Rougeot. “We need to really disrupt the business as usual. It is painful and distressing to be in classes all day when you know that your future is severely compromised by the inaction of others.” While some protesters had come on behalf of organizations such as Extinction Rebellion, a group that advocates for halting biodiversity loss immediately, other protestors were in attendance for personal reasons. Nadia Formigoni was one such protester. She had the future well-being of her son in mind at the rally. “My son is only 15 months old and I want to make sure I make a future that’s better for him,” she said. Some students wanted to ensure the anti-climate change message would be heard and received by political leaders worldwide. A 23-year-old U of T student, who was holding up a sign of a dog sitting in a burning room, expressed the need for awareness. “[We’re here] to make sure that people are thinking about it and that they identify that it’s an important issue,” they said. Similar protests took place across the country as well. Greta Thunberg, who inspired the Fridays for Future movement, protested with tens of thousands of people in Montreal.