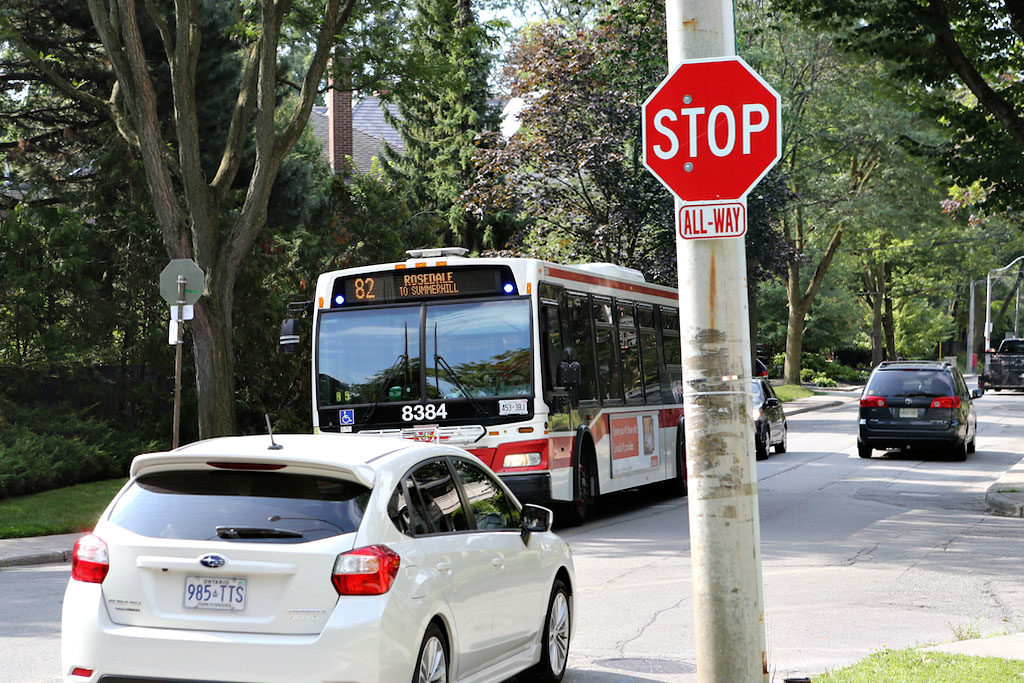 A stop sign recently installed at Glen Road and Binscarth Road in Rosedale has become a serious point of contention for many local residents with rumours and allegations circling that certain high-profile neighbours have exerted their influence to see the stop sign removed.

A 2015 study of traffic conditions found 57 per cent of the 4,500 vehicles that travel daily on Glen Road are exceeding the posted speed limit of 40 km/h. Councillor Kristyn Wong-Tam, Ward 27 Toronto Centre–Rosedale, pointed out these findings to the Toronto and East York Community Council in May when she put forward a motion to have two stop signs installed on Glen Road at the urging of the North Rosedale Ratepayers’ Association (NRRA).

The motion was made in response to safety concerns raised by some residents, and a stop sign was installed in July.

“Glen Road is the longest stretch of road in a residential area. It’s very perilous to try and cross it.… I’ve lived here for 30 years, and there’s never been a way to get across safely,” said one local resident who asked to remain anonymous.

However, there are others in the community who would like to see the Binscarth sign removed and have petitioned the councillor to do just that.

“They took umbrage with the stop sign, and the moment it went in, they started agitating to have it taken down,” said the 30-year resident.

This resident and some other community members have alleged two neighbours used their wealthy and politically powerful friends to ultimately sway the outcome in their favour.

“I’m all for open dialogue … but we’re being steamrolled because of [one resident’s] connection to one of the billionaires in the city.”

Blake Acton is one resident living near the stop sign on Glen Road.

“I’ve had an enormous amount of people agree the stop sign should never have been there in the first place,” he said. “There are noise complaints. There are pollution complaints. There is just an overall inconvenience to the community.”

Acton said he and his neighbours canvassed the community and garnered more than a hundred signatures for a petition to see it removed. He argued they were the ones who were steamrolled to begin with in favour of a select few who wished to see the stop sign installed.

“You would think the majority rules,” he said.

Wong-Tam said she met with executive members of the NRRA and a handful of local residents recently and was told they had found a community-led resolution to this conflict. She said she was told both sides had agreed to remove the sign. However, some residents are still not happy.