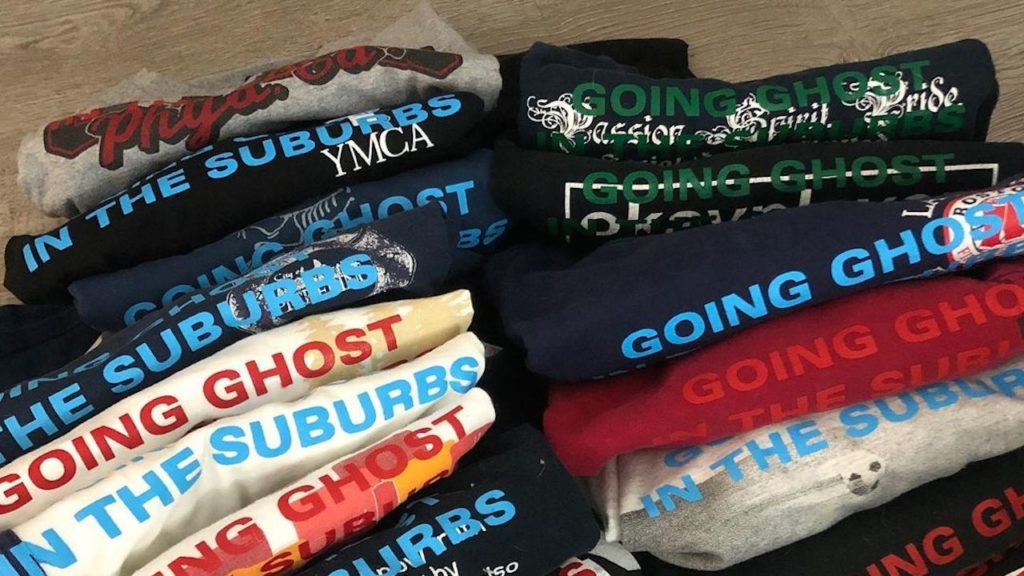 There are plenty of fashion brands paying tribute to the city of Toronto, but the suburbs don’t get as much love. Experimental streetwear brand Going Ghost in the Suburbs (GGITS) is working to change that, and founder JR Koss and Dilan Manahan are bringing a whole new reputation to suburban street style (and collecting a whole bunch of celebrity fans in the process).

Beginning with basement production, Koss and Manahan have grown GGITS into a fashion label that is recognized across the country by professional athletes and streetwear aficionados.

“We both have been making clothes since high school. We were aware of each other back in the day, linked up on a couple of collaborations and one day we were like, ‘Let’s just run with it,’” explains Manahan.

The brand has been labelled as experimental by its founders, dabbling in everything from athletic wear to mohair sweaters. Manahan believes that the pieces should range from “hiking to hooping.”

They released their first capsule in March of 2018, titled “Ghosting Kit 001,” which included GGITS-branded pencils, a notebook and a plain black tee with crimson red font. Since then, they’ve expanded into mesh basketball shorts, design-heavy printed tops and COVID-related accessories. And they’ve already garnered some big-name fans.

Kitchener native and Orangeville Prep graduate Jamal Murray has been tearing up the NBA in recent years. As the floor general for the Denver Nuggets, Murray was awarded second-team all-rookie honours in 2017 and has led a playoff contender since 2018.

In conjunction with athlete empowerment platform Uninterrupted, Manahan and Koss outfitted Murray with a custom hat, shirt and shorts for a heart-warming video. The designs were drawn by Murray and brought to life by Manahan.

One of the first high-profile individuals to rock the brand was Toronto native and Oklahoma City Thunder guard Shai Gilgeous-Alexander. He was seen wearing garments from GGITS in the brand’s early days, sparking a quick custom collection for Shai to bring to OKC.

Toronto rapper Killy, with over 300,000 followers on Instagram, has been an unofficial mascot for the brand since almost its inception, and wore the brand in one of his music videos.

“No matter what, we never box ourselves in. We don’t work in a traditional, seasonal way,” Manahan says. “Whatever challenges or opportunities are in front of us, we adapt and we use our instincts and impulses to do what we think fits.”

Coming from Burlington and Mississauga, the pair share a similar suburban upbringing. Manahan formerly worked in Toronto at an agency where he felt Toronto fashion was unnatural. This emotion sparked the foundations for GGITS.

“I was initially pretty rebellious against it,” said Manahan in response to how Toronto has shaped him. Instead of letting his notions of the city run his life, he decided to flip the script.

“Suburbs almost have this dome of protection where you don’t really get the absurdity or grit of the world. But, in your own way you’re interpreting the mysteries of life with a pretty heavy influence from nature and community.”


This mindset is what led Manahan and Koss to build GGITS the way they did. Their garments are true representations of what they are into and want to design. Backing themselves has allowed the consumers to see the brand for what they are.

In the near future, the Toronto fashion brand is hoping for more constant growth and to release some more adventurous products. They teased the idea of a few cool items being in the works. Regardless of what they release, it’s safe to say the pair are in love with it no matter what.