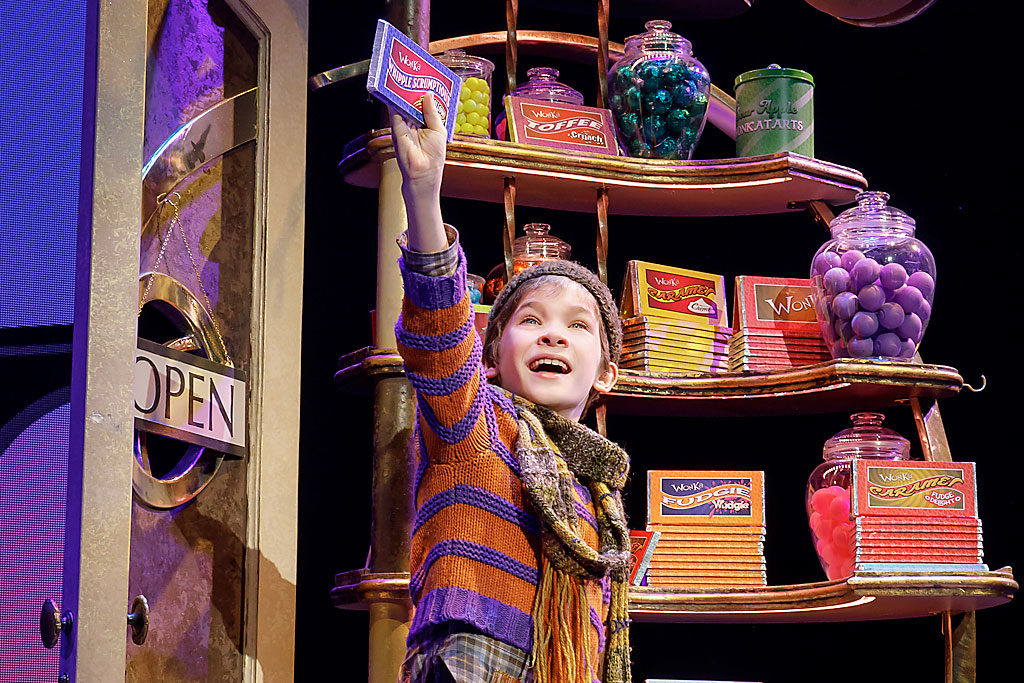 Charlie and the Chocolate Factory is on now at the Princess of Wales Theatre. One of a few choice holiday musicals about town, but it’s the only one with bona fide Oompa-Loompas, and that makes all the difference.

Roald Dahl’s marvellous book about a plucky young visionary who wins the ultimate chocolate prize thanks to his moral fibre and the strength of his imagination is one most people know and love.

Although some will have taken the time to read the book, most know it from one of the two cinematic versions. The first starred Gene Wilder (1971) in an exuberant portrayal of chocolatier Willy Wonka looking to find the right youngster to take over his chocolate factory. The second featured Johnny Depp, who played a creepier version of Wonka in the 2005 film adaption directed by Tim Burton, of course.

Here we have a musical version, based more on the original musical film than the macabre Burton-ized version. It had its West End London premiere in 2013, followed by a new Broadway run that began in 2017.

This latest incarnation adds new musical numbers that were not included in the West End production including “The Candy Man,” which was used in the 1971 film adaptation and was originally sung by Sammy Davis Jr.

So, long story short, the challenge is making such a well-known story with two successful film adaptions original and compelling, let alone surprising.

This particular musical is thoroughly enjoyable. It offers everything you’re after in a piece of theatre this time of year: Bright, joyous songs, a little sly humour for mom and dad, and a touch of humanity. And then off you go out into the night with a fresh perspective.

Sure, the set was a little lacklustre and could have used a bit more of that Wonka imagination, but given the effort that went into bringing the beloved Oompa-Loompas to life, all was forgiven.

Without the power of special effects of any sort, the small creatures that run Wonka’s factory sprung onto the stage in a feat of puppet wizardry that really should be seen to be believed.

It certainly provided one of high points of the production.

Others included the performance of little Charlie Bucket, would-be chocolatier, who on this night was played wonderfully by Henry Boshart. What a charmer.

This production isn’t perfect, but it tries really hard and for the most part succeeds.

Wizard of Oz
There is something special about a night of Ross Petty’s pantomime. It’s especially good for families with young children who seem to relish the opportunity to boo at the top of their lungs when a dastardly villain appears onstage. This year’s show features Broadway talent Camille Eanga-Selenge as Dorothy.

Peter Pan
Audiences delighted in Soulpepper and Bad Hat Theatre’s production of the J. M. Barrie classic last season. It’s great news that it is back this year. It is a special show, amusingly staged and wonderfully acted, both soulful and imaginative. It’s why we love theatre (soulpepper.ca).