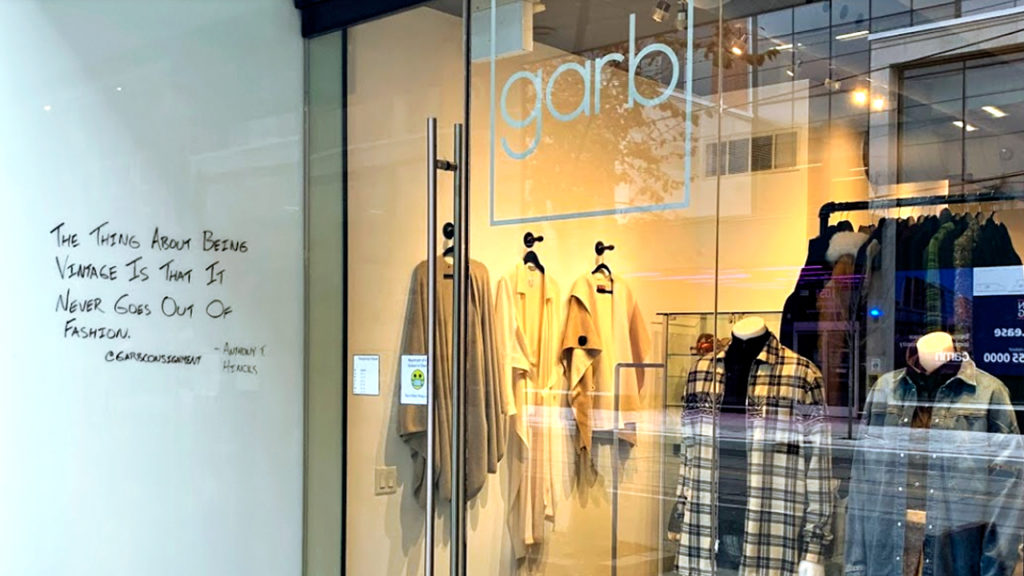 Toronto’s fashion scene can’t be pinned down to one style, but if one trend has been emerging, it’s sustainability. Whether it’s buying vintage, renting the runway or reselling old clothes, secondhand shopping is where it’s at. Pair this mindset with the influx of designer goods collecting dust in the back of closets and you have Garb.

Opened in 2014, owner Daniel Welch has curated an assortment of designer clothing ranging from last season to the 1960s. All of the pieces in the store are consigned from Toronto’s trendiest shoppers and are graded on a quality scale ranging from “A++” to “B-”.  Garb claims that majority of their pieces are priced at 50 to 75 per cent cheaper than what they would have cost at retail.

Welch was formerly a computer scientist with a deep passion for fashion. Back in his 20s, he loved runway looks, although he couldn’t afford them. So, he transitioned to thrifting vintage designer clothes with lots of life left. This hobby was the catalyst behind opening Garb. For Welch, there wasn’t some big moment that made him want to switch careers. It was “just something I wanted to do.”

“Part of the fun is finding old stuff and making it work. It’s always a bit more unique. You know, you’re not going to find someone walking down the street wearing what you are,” says Welch on shopping for vintage designer.


Garb offers a public curated selection of vintage designer. Customers approach Welch with pieces or even offer to have him physically visit their closets at home. From there, customers place items on consignment at agreed upon prices.

Welch will price pieces and grade them based on their quality. “A++ means it still has its tags on. They may have not ended up wearing it or something like that. Next is flawless which means it doesn’t look like it’s been touched by human hands. It might have been worn once or twice but still looks pretty brand new.”

From there, the system progresses down from A- to B-. These garments have been graded down based on having a pin hole, slight tear or general wear due to its age. However, Welch was adamant that sometimes he looks the other way when it comes to women’s handbags. Especially Chanel!


On the company website is a list of designer brands and general fashion brands that Welch accepts or doesn’t. In the take list are popular designers like Gucci, Chanel, Hermes, Tom Ford and Balenciaga. In that no-no list are popular street brands seen often in Toronto like Babaton, Lacoste, Uniqlo and Ted Baker.

Welch has designed the store in order to direct customer attention to the garments. White walls, beige floors and glass shelves draw eyes towards the different textiles on the racks.

Shoppers will also be greeted by a constantly changing “fashion quote” on the wall outside the shop, quoting everyone from Britney Spears (“I get to go to overseas places, like Canada.”) to Carrie Bradshaw (“Shopping is my cardio.”).

“[Garb shoppers] are a genuine mix of people. It’s basically anyone from 16 to 80. And you know, it’s just people that like the thrill of the hunt or who like designer vintage or getting something designer for much less than what they be able to pay in retail,” he says.

Garb currently has a massive presence online and on social media, where customers get a peek at garments as they come in. Welch is sure to update the social media rapidly, saying, “Whatever you seen online is what you get in store.”


Currently, Garb’s inventory consists of a boatload of terrific Gucci pieces, including designs from the Tom Ford era and current Alessandro Michele era. However, Welch is always searching for new pieces, especially ones that he can model on the store’s de facto mascot – his own pooch, Garbdog!