From Italy with love & linguine - Streets Of Toronto
Skip to content 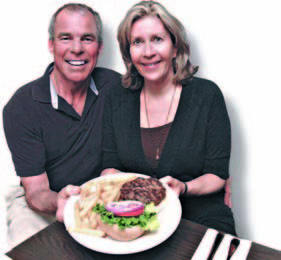 FOR THE LAST 15 years, Nino Ciuffi has been travelling back and forth between Sorrento, Italy, and Toronto in an awe-inspiring, long-distance relationship. With a restaurant in a tourist district, Ciuffi says he closed the place down during the off-season. But all that is changing with the opening of his own Toronto restaurant, Sorrento, in the Yonge-Lawrence neighbourhood. “My wife is from here, and we met at my place while she was on vacation, and I’ve been back and forth for 15 years,” says Ciuffi. “I finally found a place that reminded me of the area I’m from.”

Formerly the location of 101 Ristorante, Ciuffi says he’s totally revamped the space, where he will offer traditional Neapolitan cuisine.

“It is very casual, homemade pastas and pizzas, tasting menu,” Ciuffi explains. “We’ll have a small menu, and we’ll make our specials daily.”

Burger joint for one and all

For decades, Jody Ortved ran a successful chain of hamburger restaurants called Toby’s Good Eats. After the 12-store chain shut down in 1996, Ortved thought his time in the restaurant game was at an end. But after he noticed a dearth of family-style, dine-in burger joints, he got to business seeking out the perfect location for his comeback. And Bamburger was born.

Located in Davisville Village, the restaurant features, well, burgers: pork, turkey, beef, veggie. In addition, there is a slew of gourmet fixin’s as well as other options such as hot dogs, a club sandwich, grilled portabello mushroom sandwich and salads. The restaurant had a soft opening last month as they gear up for the busy summer season. “We live in the area, and we’ve been looking for a Yonge and Eglinton location for two years,” says Ortved. “We are different from the other burger places opening up, in that we are sitdown. People can stay a while. We wanted to appeal to everyone in the neighbourhood.”

Have macaroon will travel

La Bamboche is doing a booming business at their tiny patisserie at 4 Manor Road in North Toronto. The locals are loving the culinary creations of pastry chef Stephen Nason that the owners decided to open a second location on Avenue Road this summer.

“We’ve actually been looking for a spot on Avenue for over a year,” says Michael Firanski, coowner of La Bamboche. “We’ve wanted to expand for quite some time.”

The new location will enable La Bamboche to offer new products and add more variety to their existing line, including the popular French macaroon.

“The macaroons have taken off like crazy,” says Firanski.

The location at 1712 Avenue Rd. should be open in July.

The Dean of Dooney’s back in the restaurant game

When legendary Annex eatery Dooney’s closed down after more than two decades in operation, it was the end of an era. But, Dooney’s owner Graziano Marchese still had the business in his blood, so he packed up his recipe book and moved a block away and to open another restaurant, Annex Live.

Daniel Laurent, acting manager at Annex Live, says the restaurant features Mediterranean cuisine, and although the focus is food and coffee, Annex Live also has live music — everything from rock to jazz and classical, even comedy.

According to Laurent, the 3,000-square-foot restaurant, formerly the Poor Alex Theatre, was completely redone over the past two years and includes a patio, and there are plans for further expansion. Even the Dooney’s locals have started to find their way to Annex Live.

“We’ve noticed an exodus,” says Laurent, who says there are a few Dooney’s specialties to be found on the Annex Live menu.

Tony Xavier already runs one of the busiest restaurants on the Yonge and Lawrence strip, Chega, but a hankering for some bacon and eggs prompted him to open his own diner, conveniently located a few doors north.

“The joke is that I have too much spare time,” says Xavier.

“But, seriously I just saw the need for this style of restaurant.”

Hazel’s Diner, opened in a converted jewellery store, is already going gangbusters only a week after opening.

“It is fantastic,” says Xavier. “We’re doing an average of 100 to 120 people every breakfast.” The restaurant is notable for its recession-friendly pricing, with 90 per cent of its menu at less than $10.

“It is a great time to open this type of restaurant,” says Xavier, who acknowledges a drop in business at the upscale Chega.

“There are a lot of kids and young families in the area, and we’ve geared the menu to them.”

Milagro’s new uptown location in the Yonge and Lawrence neighbourhood opened up for business last month in the former location of the restaurant Herbs. Arturo and Andrés Anhalt opened the first Milagro two years ago on Mercer Street in downtown Toronto, and it features one of the few authentic takes on fine Mexican cuisine in the city.

Marc Thuet has renamed his King West restaurant Bite Me!. Now dubbed Conviction, the restaurant will reportedly employ 13 reformed ex-convicts in the kitchen and the front of the house.

“It’s not rocket science,” says Thuet, announcing the restaurant on his website (bitemerestaurant.com). “People with steady jobs and a steady income are less likely to wind up back in jail.”And, yes, it is for a reality TV show. Why not?

The self-taught chef with a bad-boy reputation is reportedly on sabbatical in a small Mexican town.